ATLANTA - Twin Georgia Senate runoffs have Republicans in a quandary. They could admit President Donald Trump lost his re-election bid and turn all attention to salvaging a Senate majority to counter President-elect Joe Biden. Or they could march lockstep alongside Trump and his unfounded assertions of a stolen election.

So far, Georgia Sens. Kelly Loeffler and David Perdue, along with a gaggle of GOP power players right up to Vice President Mike Pence, seem to want it both ways. Some Trump loyalists insist that’s not enough.

This tightrope act threatens party unity as Loeffler and Perdue try to beat back strong Democratic challenges from Raphael Warnock and Jon Ossoff, respectively, in Jan. 5 contests that will determine which party controls the Senate at the outset of a Biden administration. The worrisome reality for Republicans is that it wouldn’t take much splintering to tilt the contests in Democrats’ favor in a newfound battleground where Biden outpaced Trump by just 12,000 votes out of about 5 million cast in the general election. 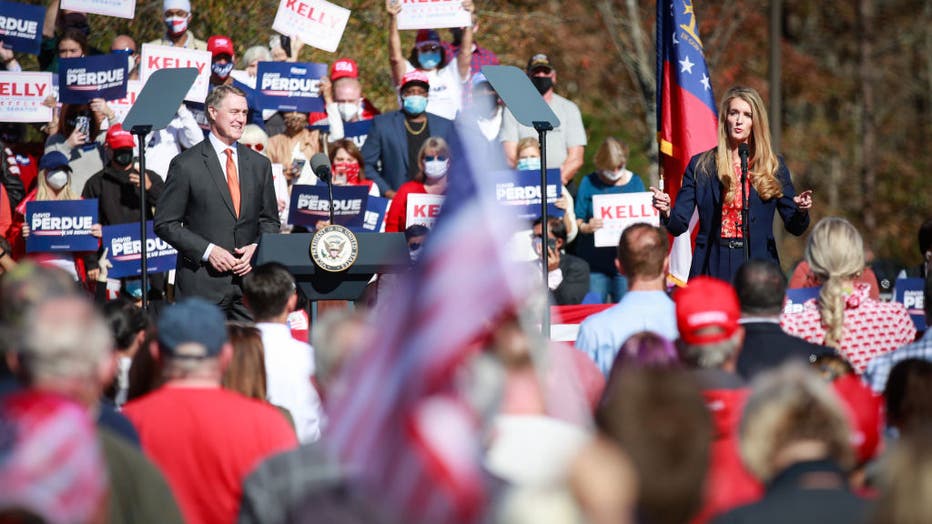 Sens. Kelly and David Perdue speak to supporters at the Stop the Steal the Defend the Majority Rally.

“If they want to excite Trump supporters to turn out to vote in the Senate runoff, candidates need to be supportive of what the Trump campaign is doing in the regard to challenging the election,” said Debbie Dooley, a national tea party organizer in Georgia and an early supporter of Trump’s 2016 campaign.

After Georgia’s Republican secretary of state and Republican governor certified the state’s vote totals in Biden’s favor, Dooley said, the sentiment among the president’s strongest supporters crystallized. They “question why they should support candidates that aren’t fully supporting Trump,” she said.

To be sure, Perdue and Loeffler have made considerable efforts to align themselves with Trump throughout their Senate tenures — nearly six years for the first-term Perdue, less than a year for the appointed Loeffler now seeking her first election. Since Election Day, the senators have called for Secretary of State Brad Raffensperger’s resignation. They’ve echoed nebulous claims about irregularities in Georgia’s voting process and tabulation and have yet to publicly acknowledge Biden as the president-elect.

Yet the campaign on the ground offers a different story, with the senators and their top supporters stressing an argument that admits, without saying as much, that Biden has been duly elected and will take office on Jan. 20.

Perdue calls a Republican Senate “the last line of defense” as he campaigns on a bus emblazoned with a clear message: “Win Georgia. Save America.”

On stage recently with Pence in Canton, Georgia, the senator got even more direct, cautioning that if he and Loeffler lose, Democrats will “have the White House, the Senate and the House of Representatives. They’ll do anything they want.”

Indeed, Democrats are maintaining their House majority and Republicans must win at least one of the Georgia seats for a Senate majority. A Democratic sweep would yield a 50-50 Senate with Vice President-elect Kamala Harris breaking the tie as presiding officer.

Loeffler avoids explicit acknowledgments of Trump’s defeat, but her message isn’t subtle. “We are the firewall to socialism in America,” she roared at one of the rallies with Pence.

Neither Ossoff nor Warnock is a socialist, but Loeffler’s hyperbole acknowledges that there’ll be Democratic veto pen in the Oval Office. So, Loeffler said, “We are going to hold the line right here in Georgia.”

The vice president, almost certainly a future presidential candidate himself, carefully parsed his words, declaring that a GOP Senate majority “could be” Republicans’ last tool to protect “all that we’ve accomplished.” Pence said nothing to counter the passions of crowds that erupted into chants of “Stop the steal!”

Sonny Perdue, Trump’s agriculture secretary and the senator’s cousin, covered every base, perhaps clumsily. The former Georgia governor called Biden’s name, unlike Pence, and warned against giving him “a blank check on America’s values.” Yet in the same speech, the secretary insisted “we’re not going to give up on President Trump.”

The circumstances are precarious enough that many establishment Republicans, including Loeffler and Perdue confidants, decline to speak openly about it. The senators have not taken questions at their joint runoff campaign events, and neither campaign responded to an Associated Press inquiry on whether they recognize Biden as the incoming president.

Trump is doing little to make his fellow Republicans’ course any easier.

Georgia Voting System Implementation Manager Gabriel Sterling continues to correct the record when it comes to claims about the 2020 election.

The president has chastised Raffensperger, the Georgia elections chief, and Gov. Brian Kemp, himself a former Georgia secretary of state, on social media. Raffensperger has taken to the editorial pages of The Washington Post to defend his job performance and his conservative credentials. When Kemp announced his certification of the 16 Democrats who’ll cast Georgia’s electoral votes for Biden, the governor took pains to make clear it was a purely ministerial act required by law.

Trump remains defiant even after losing round after round of court disputes and after the General Services Administration finally acknowledged Biden as president-elect, the legal step required for the federal government to begin the customary transfer of power.

As recently as Wednesday, Trump retweeted hollow claims of a fraudulent election, and, in Georgia, his team’s top lawyer, Lin Wood, fanned the flames.

Wood tweeted that Loeffler and Perdue should demand that Georgia hold a special legislative session to review ballots and conduct a “legitimate” recount, despite the thorough one that was held, as a condition for getting the votes of Georgians in the run-off.

Voters like Shaun Tracy are the targets of the muddled messaging.

The 60-year-old came to see Pence, Loeffler and both Perdues, but made clear she was there because of her loyalties to the president. “There’s just been too many irregularities and discrepancies going on,” Tracy said, repeating the baseless assertion that Biden’s victory is due to fraudulent absentee ballots, among other things. “They’re trying to take our freedom away.”

Standing in front of his campaign bus, the senator launched into his usual entreaty about the runoffs’ importance. As Perdue spoke, a man in the audience cried out: “What are you doing to help Donald Trump?”