ATLANTA - The political battles in Georgia appear far from over two and a half weeks after election day.

The day after Georgia certified its election results, multiple rallies have taken place throughout Atlanta.

Despite death threats and an outcome in contrast to how he says he votes, Republican Secretary of State Brad Raffensperger certified Georgia's election results. Georgia's 159 counties reported former Vice President Joe Biden with 2.47 million votes, President Donald Trump with 2.46 million votes, and Libertarian Jo Jorgensen with 62,138. That leaves Biden leading by a margin of 12,670 votes, or 0.25%.

"The numbers reflect the verdict of the people, not a decision by the Secretary of State's office or of courts or of either campaign," Raffensperger said.

But the results don't mean that the state is moving past this election cycle, with legal battles, Senate runoffs, the looming possibility of another recount, and both parties accusing each other of attempting to steal the election.

Trump tweeted the same day as the certification, claiming officials "refuse to let us look at signatures which would expose hundreds of thousands of illegal ballots."

Secretary of State says election results will be certified

Secretary of State says election results will be certified

The Secretary of State's Office has already clarified that they've verified the signatures, and it's no longer possible to look at them because the signed envelopes have been separated to protect voters' privacy.

But the president's tweets continue to fuel the fury in Georgia, with multiple "Stop the Steal" rallies popping up in the state, including a larger one scheduled for noon at the Georgia Capitol.

In response, left-leaning groups including Atlanta Antifacists and Metro Atlanta DSA will hold their own rally an hour earlier at Atlanta City Hall to protest what they call a "last-ditch effort to undermine Georgia democracy."

Meanwhile, Gov. Brian Kemp broke his silence Friday to acknowledge he will formalize the results according to Georgia law, but the governor did not clearly endorse the results.

"We demand complete explanations for all discrepancies identified so that our citizens will have complete confidence in our elections," Kemp said. "In the runoff election, we cannot have lost memory cards or stacks of uncounted ballots. We must have full transparency in all monitoring and counting."

In fact, the signatures on absentee ballot applications and envelopes are required to be checked when they are received. The audit is only meant to ensure that the voting machines counted the ballots correctly, Raffensperger’s office has said.

Now that the results are certified, Trump’s campaign will have two business days to request a recount since the margin is within 0.5%. That recount would be done using scanning machines that read and tally the votes and would be paid for by the counties, the secretary of state’s office has said. 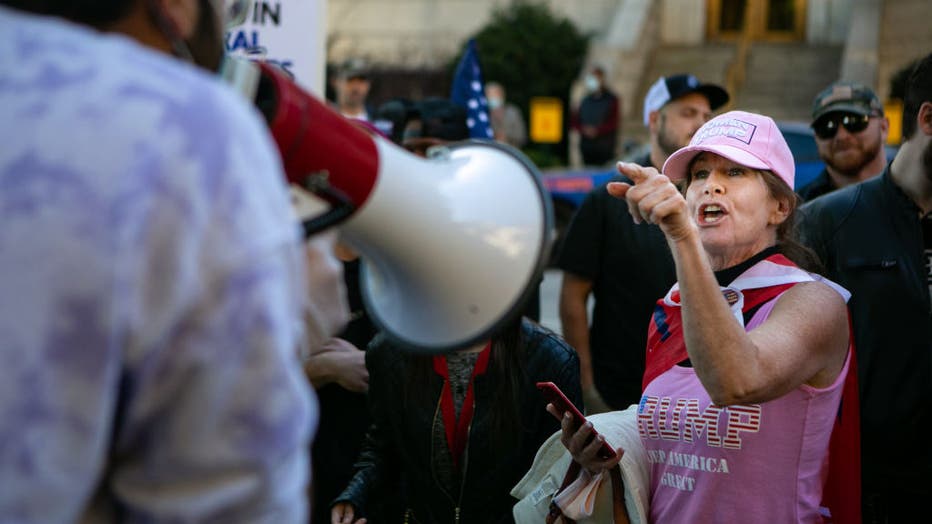 Trump supporters argue with a group of Biden supporters outside the Georgia Capitol Building on Nov. 18, 2020.

The hand count for the audit produced some slight differences from the previous machine tally, but no individual county showed a variation in margin larger than 0.73%, and the variation in margin in 103 of the state’s 159 counties was less than 0.05%, the secretary of state’s office said. During the audit, several counties discovered previously uncounted ballots and had to recertify their results.

“It’s quite honestly hard to believe that during the audit thousands of uncounted ballots were found weeks after a razor-thin outcome in a presidential election,” Kemp said. “This is simply unacceptable.”

Raffensperger said Friday that he plans to propose legislative changes aimed at increasing trust in the results, including allowing state officials to intervene in counties that have systemic problems in administering elections, requiring photo ID for absentee voting and adding stricter controls to allow for challenges to voters who might not live where they say.

“These measures will improve the security of our elections, and that should lead to greater public trust,” he said.

Raffensperger, a self-described “passionate conservative,” has endured intense criticism and insults from fellow Republicans — from the president to the chair of the state Republican Party — over his handling of the election. He acknowledged their feelings on Friday.

Biden is the first Democratic presidential nominee to carry the state since 1992.

The focus has also begun to shift to two runoff elections that will ultimately decide which political party controls the U.S. Senate. Republicans Senators David Perdue and Kelly Loeffler face close races with Democratic challengers Jon Ossoff and Rev. Raphael Warnock. Republicans need just one of those seats to maintain their majority.