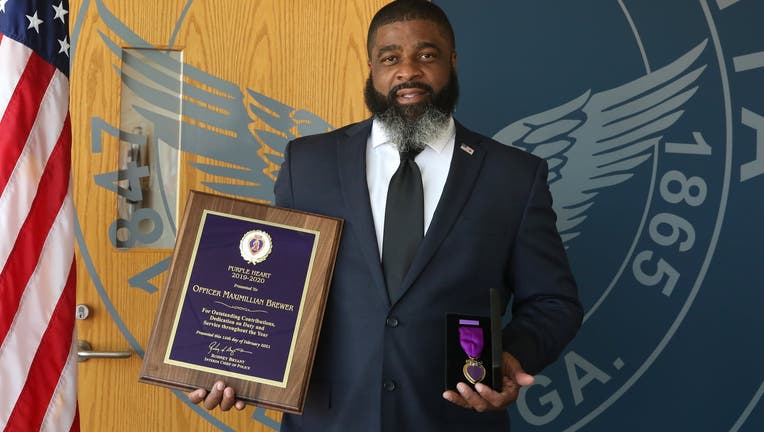 ATLANTA - The Atlanta police officer struck by an ATV during the George Floyd protests in Downtown Atlanta last year was honored Tuesday with a Purple Heart award.

Atlanta Police Motors Unit Officer Max Brewer was helping to block traffic at the intersection of Marietta and Spring streets on the evening of May 30, 2020, for a demonstration being held when a speeding ATV struck him. Brewer was flipped in the air and fell on his head after being struck by the ATV.

Thankfully, a nearby Georgia National Guard medical unit was able to quickly stabilize the officer so he could be quickly rushed to Grady Memorial Hospital.

The officer said both of his lower legs were broken by the impact.

Standing on his own two feet this week, Officer Brewers was awarded the purple heart for his "bravery and strength." He also "was happy to be greeted by familiar faces and to share some laughs with colleagues," according to an APD Facebook post.

"Despite his long road to recovery, Officer Brewer remains optimistic and continues to show signs of improvement. Officer Brewer, we continue praying for your healing. Your dedication to the Department and commitment to service for our community is second to none."

Brewer was an 18-year veteran of the department at the time of the accident.