WINDER, Ga. - The Georgia National Guard said the reason it had to pull out of a Winder nursing home Tuesday without testing any residents is because they didn’t have enough supplies when they showed up to fully test everyone.

The administrator of Winder Health Care and Rehab Center said she was told by the National Guard that they were redeploying to test inmates and officers at a jail, something she said she was told was a “higher priority.”

“The bottom line is we do not prioritize life over anyone else,” said Georgia National Guard Lt. Colonel Patrick Watson. “That is unequivocally not what the case is here.”

When National Guard soldiers arrived at the nursing home Tuesday afternoon, it was their third visit of the month. Earlier, they had deep cleaned the facility and also tested some of the employees. Lt Col Watson said it’s rare for them to visit a nursing home multiple times.

But administrator Katy Callaway said she was told Tuesday the National Guard was there to help test all of her 119 residents. She and her staff quickly started filling out lab requisitions to get the testing underway.

Instead, she said she got a call from a lieutenant explaining he had to pull his people from the parking lot and divert them to a “higher priority site.” That turned out to be a jail more than an hour away.

“It was heartbreaking,” Callaway told us Wednesday. “And I’m devastated.”

Two of her residents had earlier tested positive off-site. Another 21 employees have also tested positive. But Callaway said she’s been unable to arrange facility-wide testing.

The bottom line is we do no prioritize life over anyone else.

Nursing homes across the state credit the National Guard for helping to clean their facilities, add emergency staffing and organize mass testing during this historic pandemic. So far guard personnel have visited 710 of 790 elder care facilities.

In this case, did the National Guard choose a jail over a nursing home? Officials insisted the answer was no.

A spokesman said they simply did not have enough tests Tuesday to process everyone. The Winder Health Care administrator said she was told they had 112 tests that day. She has 119 residents.

Regardless, they’re all being tested now. Soldiers in personal protective gear could be seen all morning going in and out of the Winder facility. 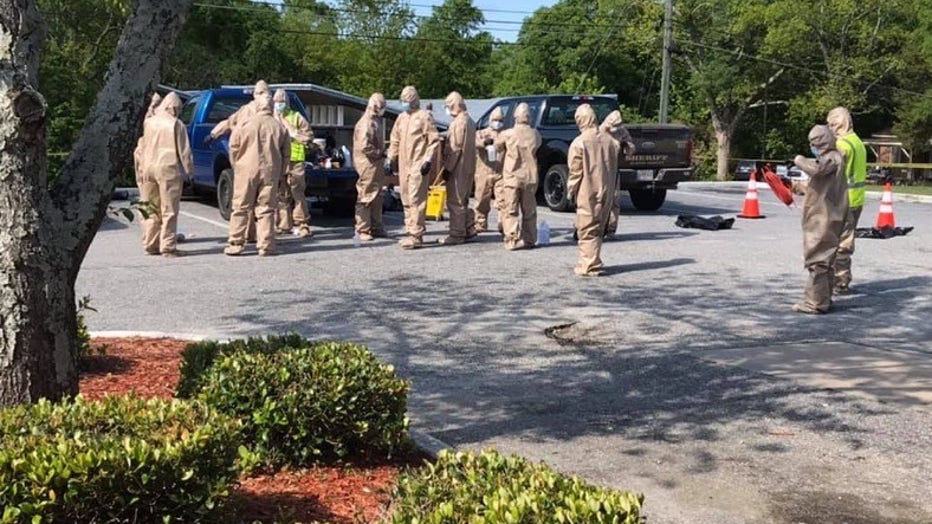 All prisoners and correctional officers at the Elbert County jail got tested Wednesday, one day after the National Guard says it realized it didn't have enough tests to fully check all residents of a Winder nursing home (photo courtesy Elbert County

Meanwhile, Elbert County authorities are crediting the National Guard for their part in “making the community safer.”

Elbert County is the jail that got those tests after one inmate and one jailer contracted COVID-19.  The National Guard also deep cleaned the jail itself.

“That was a request of that detention facility, law enforcement and first responders for us to go support that facility because they were in dire need too,” explained Lt. Col Watson.

The Guard expects the nursing home test results back as early as Saturday.