ATLANTA - Normally the main kitchen within Mercedes-Benz Stadium is bustling with 100 cooks, preparing all kinds of food on a typical game day.

These days, the kitchen staff is limited to seven chefs in the age of social distancing and no fans to serve at the stadium.

With events cancelled for the time being, Mercedes-Benz Stadium's kitchens are being used to make food to help feed those in need around the metro Atlanta area.

Atlanta United has missed out on two home games at Mercedes-Benz since the MLS put the season on hold in mid-March, and the stadium was still set up on Tuesday for the Five Stripes' March 14 match hosting Sporting Kansas City, like an eerie moment paused in time. 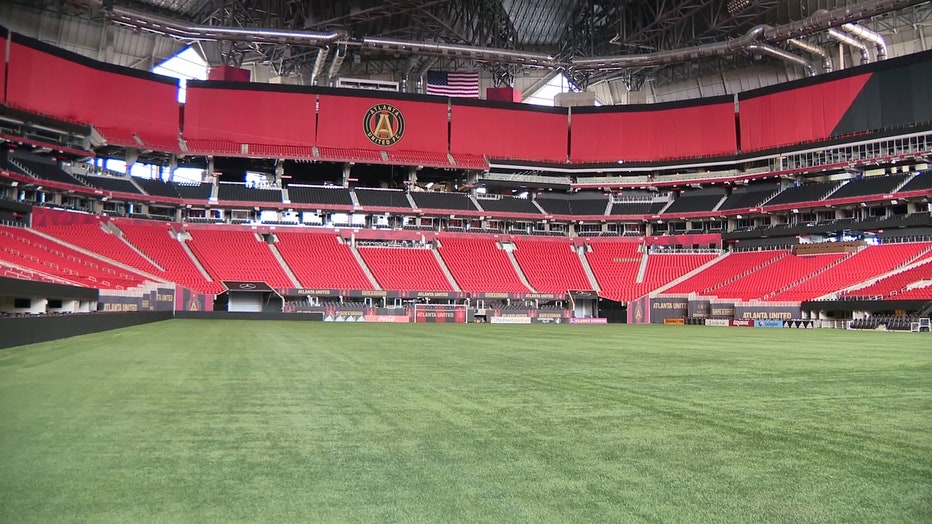 Atlanta United has missed out on two home games at Mercedes-Benz since the MLS put the season on hold in mid-March, and the stadium was still set up on Tuesday for the Five Stripes' March 14 match hosting Sporting Kansas City, like an eerie moment pa

The stadium also was set to host the NCAA men's basketball Final Four. After those contests were canceled, 3.5 tons of food already in house in preparation for the events was donated to needy neighbors. Now, the stadium and the Arthur M. Blank Family Foundation want to use the facility to continue giving back.

"When this first happened, the first thing I thought of is what we could actually do with the capacity of the stadium, and feeding 70,000-plus people every time we open the doors, we’re able to do a lot for the community," said Mercedes-Benz Stadium Executive Chef Matt Cooper. "We do very high-volume bulk food, so we have a massive amount of fryers and ovens and tilt skillets and grills, so we’re using what we do normally during the season for the Falcons and Atlanta United and just bringing that to the community."

Now the stadium's kitchens and chefs are ordering more food, cooking much of it for CHRIS 180, a social services organization serving the Atlanta metro area.

"We’re cooking and producing for thousands of families, and CHRIS 180 is bringing it directly to the families’ homes, which is really cool," Cooper said. "They don’t have to leave their house. They’re taking the bulk-produced food, and they’re packaging it up, and they’re literally bringing it door to door within the city." 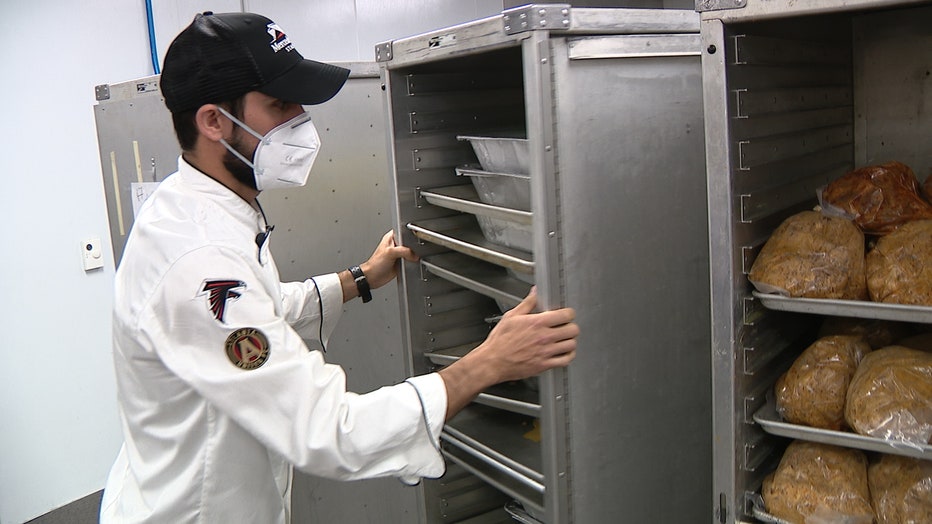 CHRIS 180 volunteers put together meal packages to be delivered or picked up. Those packages were composed about half and half between the Mercedes-Benz food donations and other food donations. On Tuesday, CHRIS 180 packed 250 meals.

"It's awesome. This, what you see right now, is what CHRIS 180 does throughout the year," said Aparicio Thompson, a CHRIS 180 program manager. "So for us, it’s just a normal day of what we do. It’s a wonderful feeling when you have people coming up, saying thank you, knowing that they don’t know when their next meal is coming, so they’re depending on us and individuals like us our on the front line trying to make sure that they get their needs."

During the COVID-19 pandemic, in addition to meal distributions, CHRIS 180 has continued its core mission, which also includes providing counseling in a time filled with more anxiety for many. If you'd like to help or learn more, visit their website at https://chris180.org.

In total, the Arthur M. Blank Family Foundation and Mercedes-Benz Stadium are helping to distribute 8,000 meals per week, between CHRIS 180 and to healthcare workers at Piedmont Hospitals in Fayette County and Newnan.

"All of us are coming together, trying to figure this out," "We're facing things that we've never faced before, so to be working for a guy like (Blank), who cares so deeply about the community and then to just be part of an organization that wants to get in the game -- we don't want to sit and watch this from the sidelines. We said, 'How can we use the assets that we have at our disposal to make an impact during this really difficult time?'"

Additionally, with a grant from the Blank Family Foundation, Atlanta chef Hugh Acheson, owner of 5&10 and Empire State South, is partnering with Georgia Organics and Fueling the Frontline to deliver hundreds of meals each week to frontline workers at Atlanta Medical Center and the VA, as well as to children and families through Carver Neighborhood Market, the Metro YMCA and HEALing Community Center.