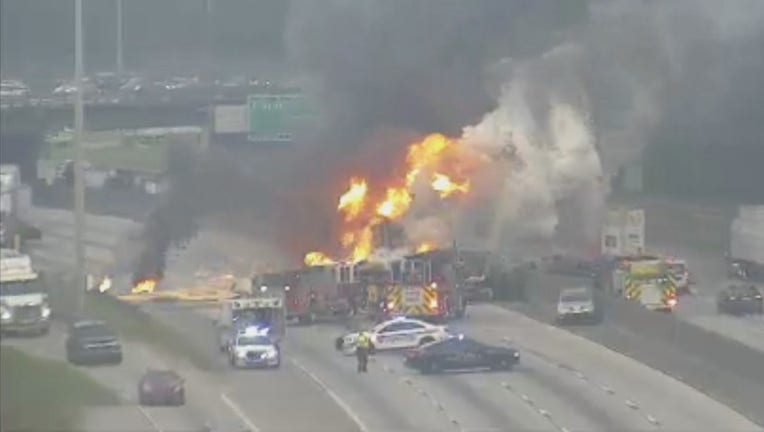 East Point Fire officials tell FOX 5 that the accident involving three tractor-trailers and a SUV happened on the southbound section of the interstate near Washington Rd in East Point shortly before 7:30 a.m.

At the scene, crews found the sedan pinned between two tractor-trailers with heavy flames coming from them. According to officials, one of the trucks was carrying lumber and the other one was carrying 5 tons of candles.

After hours of work, firefighters were able to knock down almost all of the blaze.

Crews were able to safely evacuate all the motorists involved. The driver of one of the tractor-trailers had minor burn injuries and had to jump from his vehicle. He is now being treated at a local hospital.

One fire engine was also involved in a separate accident while trying to get to the fire.

Officials have not yet released any information about the cause of the fire or if there are any injuries.

The fire caused major delays and a massive traffic backup in both directions on the interstate.

Drivers should expect significant delays and should try to avoid I-285 by using Interstate 75/85.