The Atlanta Braves celebrated their World Series victory with a high-tech ring like you've never seen before. The vice president and creative director of Jostens, the creators of the special jewelry, join Good Day to go into the details and what fan get to celebrate the team as well.

ATLANTA - The Atlanta Braves celebrated their World Series victor with a high-tech ring like no other and now you have a chance to get a piece of Braves history as well.

The Atlanta Braves Foundation are giving a lucky fan the opportunity to support a good cause and possibly win their own 2021 World Series Championship Ring.

Fans can donate for a chance to enter to win the ring with all net proceeds benefiting the Atlanta Braves Foundation, whose goal is to improve equity and access in sport, health, education and well-being outcomes for children, families and communities.

The contest ends Sunday, May 8 as the Braves face the Milwaukee Brewers at Truist Park.

You can learn more about the sweepstakes on the team's website: braves.com/ringsweeps. 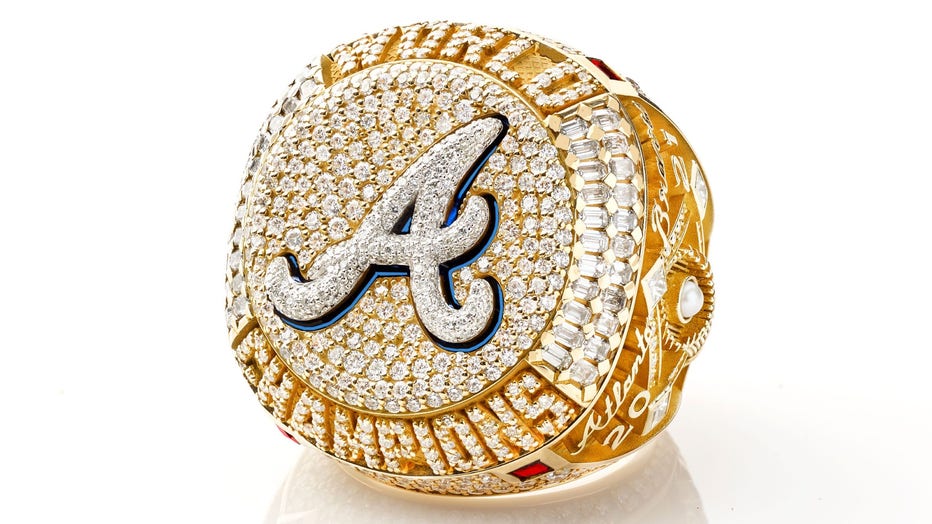 The Atlanta Braves and Jostens created a custom, hand-made ring with over 750 diamonds and special details connected to the team and their victory.

The top features the Braves "A" logo in white gold that is 18.71 karats - an homage to the franchise's founding in 1871. Along with the logo is the words "World Champions" in diamonds on the top and bottom. On the left and right, there are 44 emerald-cut diamonds - celebrating Hank Aaron's jersey number.

The top of the ring can be removed using a specialized mechanism, which makes the inside light up and reveal a miniature Truist Park. Inside the stands of this tiny park is another reference to Hank Aaron and 11 rubies placed on where each of the Braves 11 World Series homeruns were hit.

The left side of the ring has the Braves player's name and tomahawk logo as well as a miniature version of Truist Park's right field wall. On the right is the Braves wordmark logo in the 1972 font, a stylized baseball diamond, and a pearl - referencing former Braves player Joc Pederson's trademark pearl necklace.

The ring also has the series results, a red sword referencing Guillermo Heredia, and the postseason motto of "Battle won."

The rings were presented to the Braves during a special pregame ceremony before the game Saturday night at Truist Park.