Fans of the Braves can catch all the excitement with a Braves Walk through The Battery Atlanta, followed by a 2021 World Series recap video, World Series pennant ceremony, and a ceremonial first pitch by Astronaut Shane Kimbrough.

ATLANTA - The Atlanta Braves continued their 2021 World Series celebration Saturday with the debut of their championship rings.

The Braves released a video to show of the rings unique features, which include the Braves logo, a pearl which became a fan favorite during the postseason, and of course a large assortment of diamonds.

"Our 2021 World Series Ring is a masterpiece which beautifully celebrates our incredible season which ended as World Champions," Braves' President and CEO Derek Schiller, President & CEO said in a statement.

The Atlanta Braves received their World Series Championship rings during a special pregame ceremony at Truist Park on April 9.

The slogan, "FOR THE A," which became a moniker used throughout the team's playoff run, appears surrounded by diamonds on the bottom portion of the ring.

How many precious stones does the ring feature? 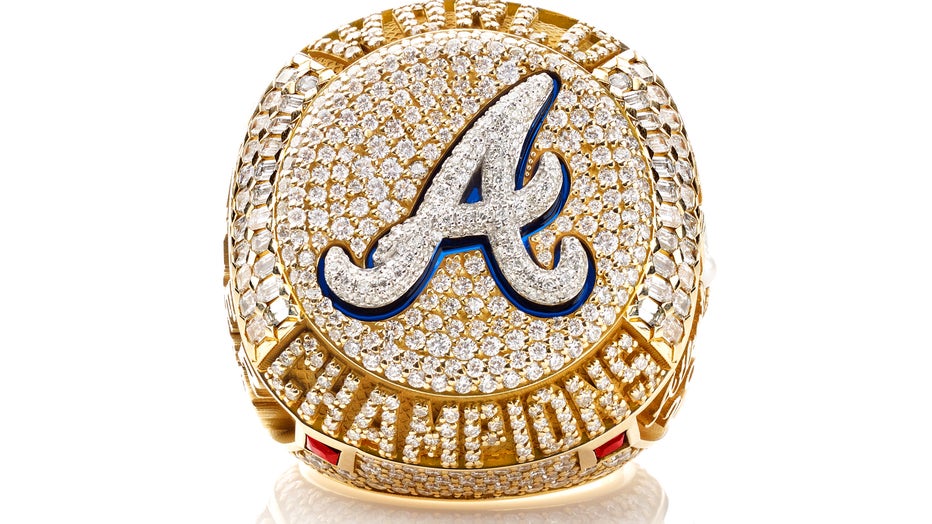 The ring consists of the following stones:

The rings were presented to the Braves during a special pregame ceremony before the game Saturday night at Truist Park.