It's the good luck charm that came in clutch. Atlanta Braves Joc Pederson tossed pearl necklaces to fans during the World Series parade.

Pederson started wearing his iconic pearls during the Braves' winning season saying that he wanted to do something different from what everyone else on the field was doing.

The unorthodox necklace quickly became a rallying symbol for Braves fans throughout the team's march toward a World Series Title. Fans (and FOX 5 anchors) would wear pearls while watching the games.

FOX 5's Ron Gant pulled out the pearls as a shoutout to outfielder Joc Pederson as the Braves attempt to clinch the NLDS.

After the Braves victory parade last Friday, Pederson donated his pearl necklace to the National Baseball Hall of Fame and Museum in Cooperstown, New York.

For a limited time through Saturday, the necklace can be viewed by fans at the Hall of Fame before it enters the Museum's "Autumn Glory" exhibit. 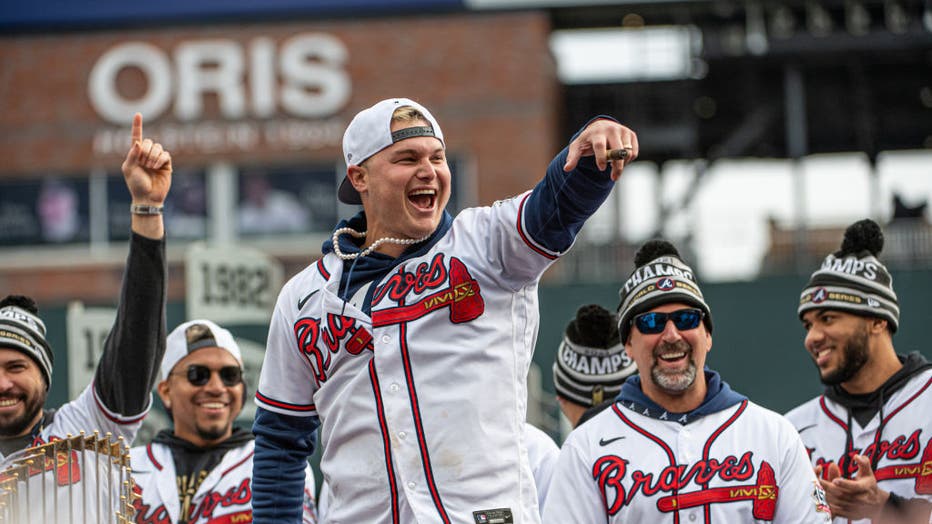 Atlanta Braves left fielder Joc Pederson getting a huge rise out of the crowd for doing a mike drop during the championship celebration for the 2021 World Champion Atlanta Braves at Truist Park. (Photo by John Adams/Icon Sportswire via Getty Images)

Also heading to the Hall of Fame is a batting helmet worn by World Series MVP Jorge Soler, the bat Freddie Freeman used in Game 6, spikes worn by pitchers Max Fried and Will Smith, a baseball cap worn by shortstop Dansby Swanson, and a jersey worn in Games 1 and 2 by manager Brian Snitker.