Holly Springs police officer killed in the line of duty

Holly Springs Officer Joe Burson was killed in the line of duty on Wednesday evening during a traffic stop. The driver of the vehicle took off, dragging the 25-year-old officer. Another officer shot and killed the suspect. Burson is survived by his wife.

HOLLY SPRINGS, Ga. - An officer with the Holly Springs Police Department was killed in the line of duty late Wednesday in what authorities say started as a traffic stop that turned into an officer-involved shooting

Officer Joe Burson died after being dragged by the suspect's car during the stop, according to officials with the GBI and Holly Springs Police.

The incident happened around 11 p.m. on Harmony Lake Drive and Hickory Road. According to the GBI, while Officer Burson was being dragged he managed to shoot and kill the driver, identified as 29-year-old Ansy Dolce, of Cherokee County.

"It was just a simple stop and bottom line is every bit of this could have been avoided," said Holly Springs Police Chief Tommy Keheley.

The GBI and local law enforcement provide an update on an incident in Cherokee County that left a Holly Springs officer and suspect dead during a press conference on June 17, 2021.

Chief Keheley said a shift supervisor was also present for the traffic stop due to speeding.

The investigation into both the officer and suspect's deaths is being conducted by the Georgia Bureau of Investigation. The GBI said they will be going over body cam video to piece together a timeline of events and find out what led to the shooting.

An autopsy will also be conducted by the GBI Crime Lab on Burson’s body. 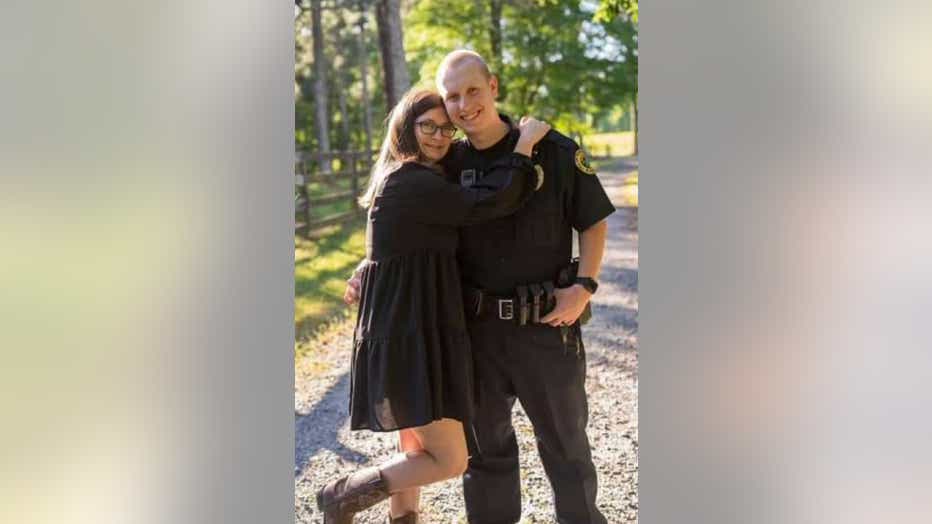 "Joe Burson, a 25-year-old new police officer, has been on the road for a year to a year-and-a-half," said Chief Keheley.

During a press conference Thursday afternoon, Chief Keheley said Burson was the type of officer any chief would wish they could "clone."

"He was a model officer. If you had the ability to clone police officers you would have wanted your officer to be Joe Burson," said Keheley. "It was not uncommon for him to take time to spend with the children. If anyone wanted to bring their child by the department, Joe was always available to let them sit in his car, ask him questions, turn on the blue lights, things of that nature." 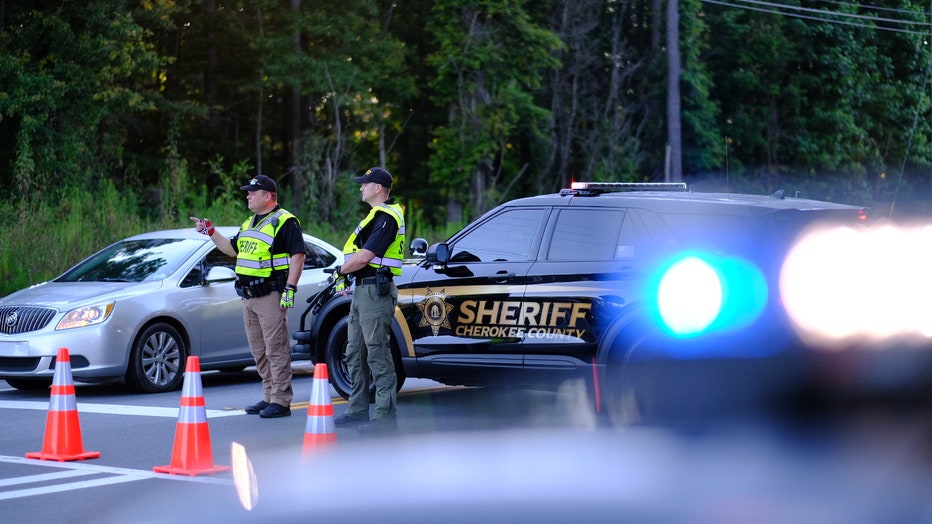 Keheley said he met overnight with the wife of the officer, who was from nearby Ball Ground. Burson was initially hired and trained by Holly Springs, his first police employer.

Family friends told FOX 5 News Burson was a drummer in a band in his off time. He also enjoyed the outdoors. Friend and family said Burson was also very active in his church. But it might be his love of service to his community for which his chief says he will be remembered.

"This is the worst day of any police chief's job," Keheley said.

Burson, 25, of Ball Ground, is survived by his wife.

The Cherokee County community is mourning the loss of Officer Joe Burson, of the Holly Springs Police Department. Officer Burson was killed Wednesday night during a traffic stop. Thursday evening, members of the community came together to pray for the officer.

"When it's this close to the community, it hits hard," said Leah Richards

Richards was just one of the hundreds who stopped by the Holly Springs Police Department headquarters to leave flowers, notes, candles, and prayers on Thursday. It was a touching show of support for Officer Burson's family and the entire police department. 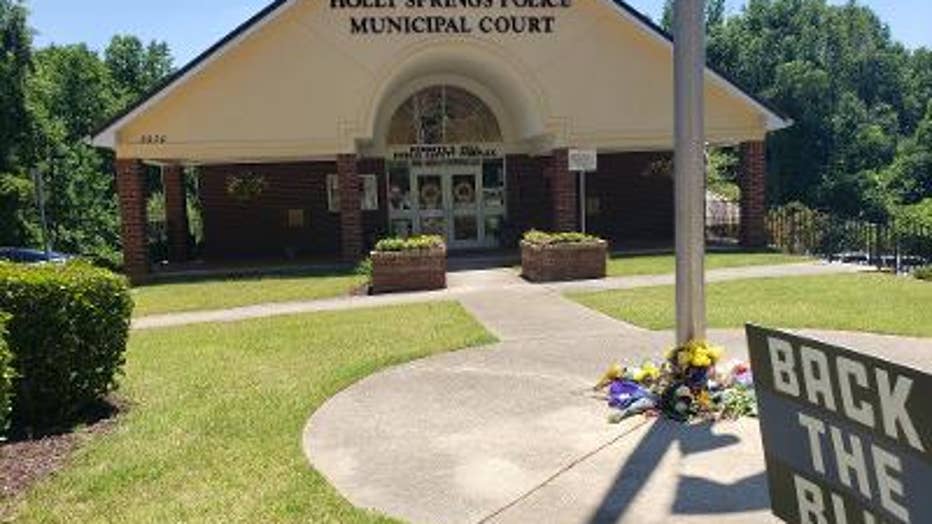 Several Cherokee County Fire trucks rolled up in the afternoon to pay their respects and leave a blue wreath at the base of the flag in front of the police department. 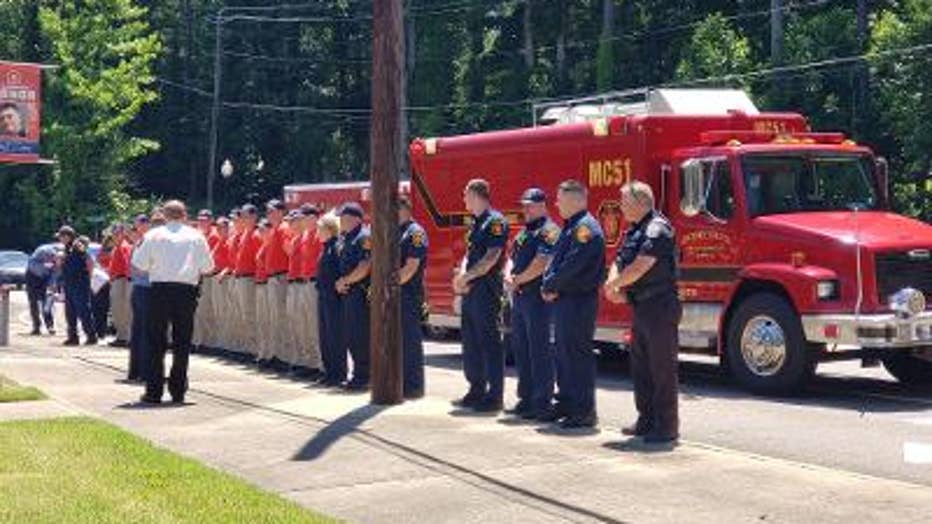 Many across metro Atlanta changed their profile photos on social media to match the Holly Springs Police Department's Facebook page in a show of support and solidarity. 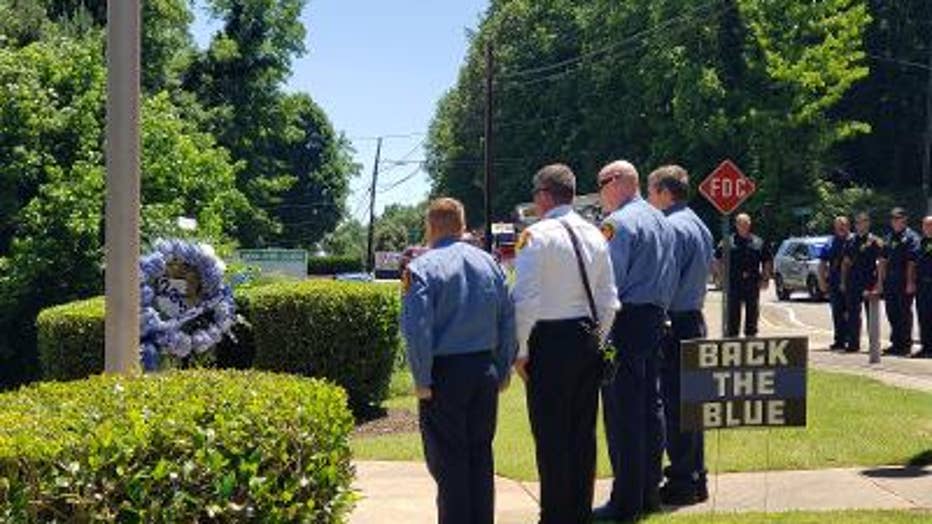 "We thank you for his sacrifice to our community, to keep us safe, for his bravery in the moment of, I'm sure, was incredible fear,"  Lead Pastor Jason Gerdes told his congregation.

Thursday evening, many in Holly Springs gathered in song and prayer at the Revolution Church in Canton.

"I can't imagine… just the grief of Marykate and Joe's parents and knowing that he's not coming home today. So, help me just pray for them, ask you to comfort them," Pastor Gerdes prayed. "They embarked on a journey they never imagined they would have to do."

Even though Burson has left his earthly home, his pastor said this congregation finds comfort in knowing he's now home with the Lord.

"You did what was necessary to save Joe and that he trusted you," the pastor prayed.

The Holly Springs Police Foundation has set up an online account on its website to raise funds for Officer Burson's family.