Learning from past pandemics

What we can learn from the past pandemics

ATLANTA - When it comes to the best way to beat a pandemic, history is often the best teacher.

“The military proved if you get strict with this, you can beat it," said Hitt. 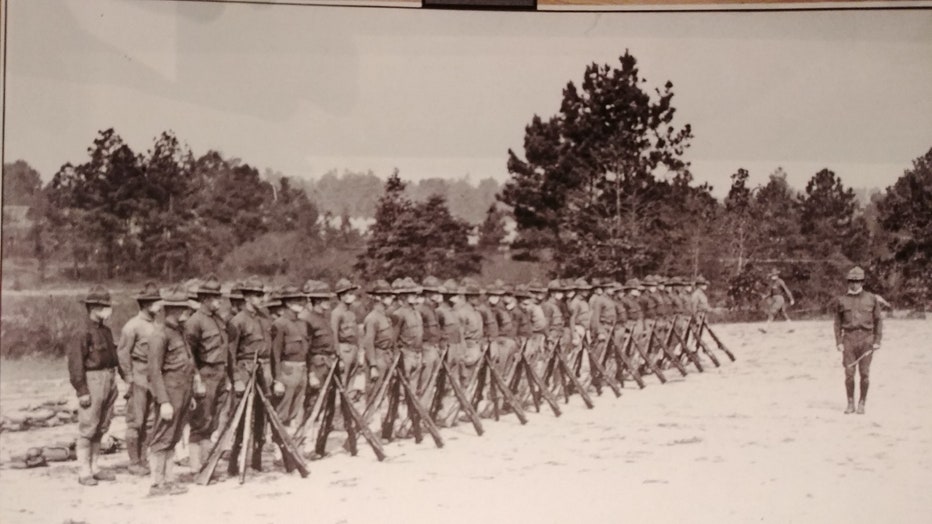 The 63-year-old retired cop may call Cherokee County home, but these days he spends most of his time living in a world built a century ago, a long-abandoned military camp near Chamblee that helped teach Atlanta how to survive the last pandemic.

Spanish Flu first hit Camp Gordon in mid-September of 1918. The camp operated as a training ground for soldiers heading to the front lines of World War I. It was built where DeKalb-Peachtree Airport is today.

A few weeks after that first positive flu case, the order went out to the soldiers: everyone, including officers, must wear a mask. Photographs from that period show troops in formation wearing masks. 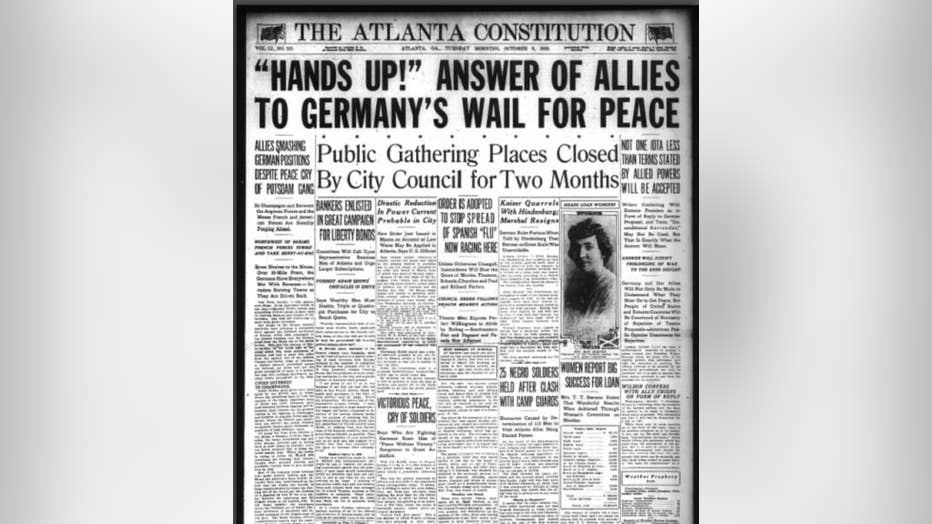 While WWI wound down in Europe, Atlanta city leaders ordered a two-month closing of all public gathering spots in an attempt to stop the spread of Spanish Flu. (Atlanta Constitution)

By October 1918, though, the flu had spread to Atlanta. City fathers immediately shut down all public gatherings for two months, including churches, schools and movie theaters. No "expectorating" or spitting allowed. All personal cars and streetcars had to keep their windows open, thinking fresh air was the best way to stop the spread.

But the city decided not to cancel the annual Southeastern Fair, a huge event expected to draw thousands that month. Instead, it ordered anyone coming to the fair to wear a mask. 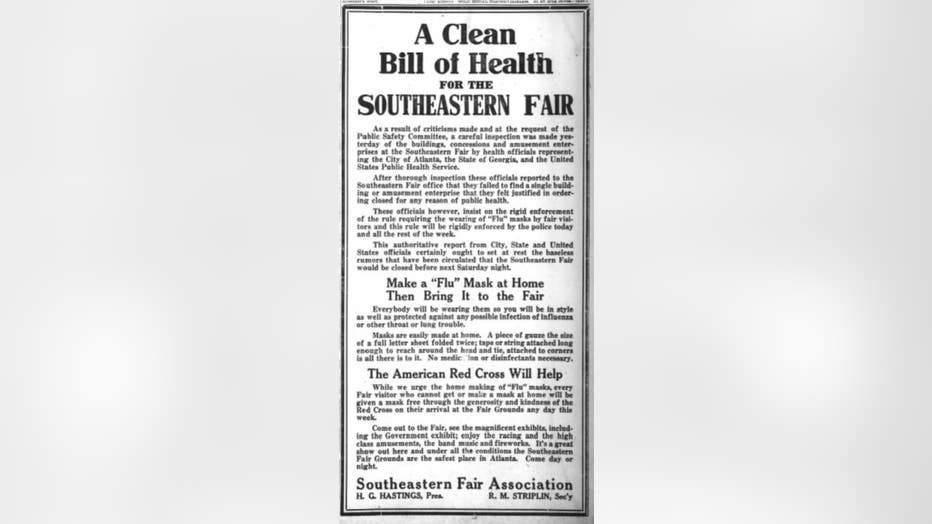 Rather than cancel an event that always brought thousands to Atlanta, all visitors to the SE Fair had to wear a mask. The Red Cross offered to help teach people how to make them. (Atlanta Constitution)

“They were trying to make it fashionable in Atlanta to wear a mask," said Hitt, himself wearing a mask and WWI Camp Gordon colonel's uniform for our interview. "Everybody’s doing it."

In the Atlanta Constitution newspaper from Oct. 15, 1918, the headline read "Masks will make Fairgrounds look like Great Harem."

The article even suggested masks could improve the appearance of its wearer.

“Think of the woman whose teeth fail to fit — she may be beautiful in a mask; think of the man whose wife knocked out a few of his teeth. He may be handsome again, in a mask.” 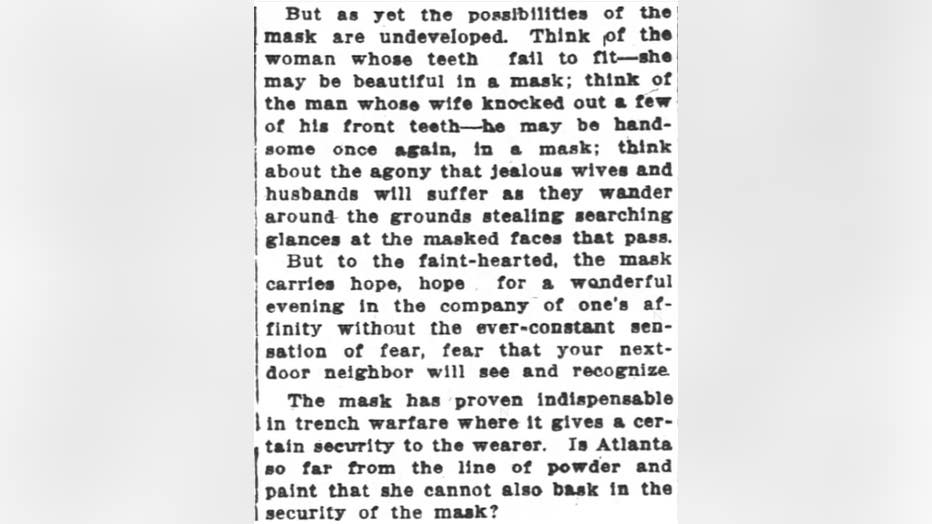 Writers tried to make light of the mask rule, even if it may seem sexist today. (Atlanta Constitution)

Other Georgia cities like Macon and Americus followed suit with their own mask orders.

The idea did not save everyone.

Many died of a common complication from the flu: pneumonia. Handwritten burial records from Westview Cemetery during October, 1918 show lists citing pneumonia or influenza as the cause of death. 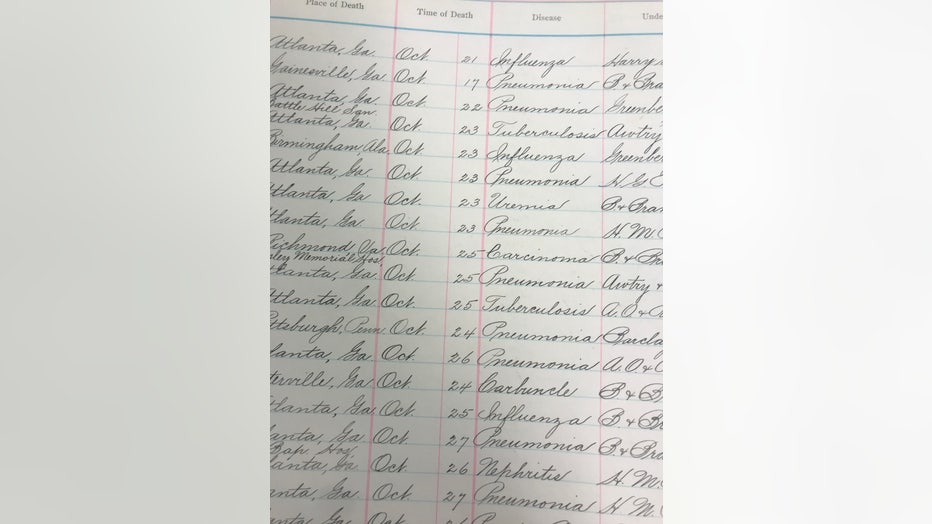 Westview Cemetery still has the handwritten burial records from October, 1918 show the cause of death during the height of the Spanish Flu.

Westview has one of the few markers remembering the Spanish Flu. It covers the now-sealed receiving vault where bodies were kept until funerals could be arranged.

Yet current Westview Cemetery owner Charles Bowen says the numbers were not significant compared to other cities.

“As far as there being a huge spike in the Atlanta area, it was not this massive great number of people," Bowen explained. 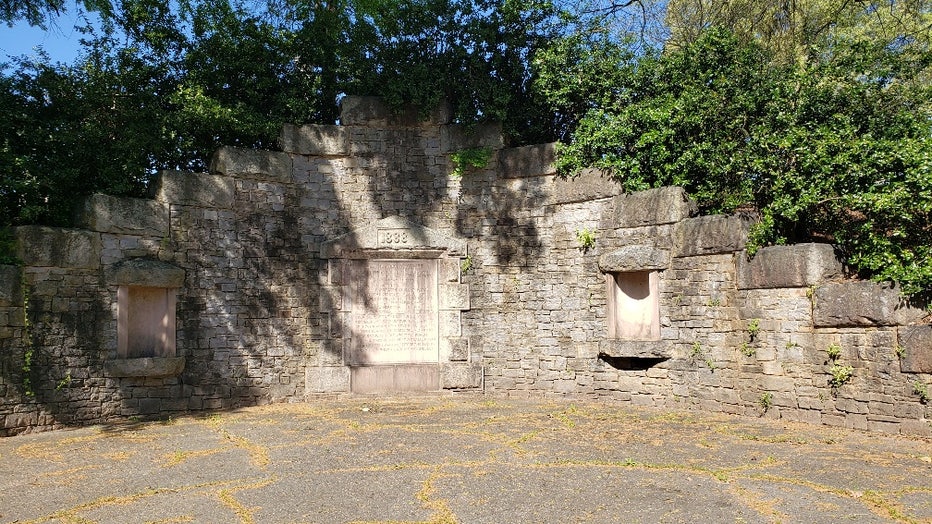 You can still visit the receiving vault at Westview Cemetery in Atlanta where the bodies of Spanish Flu victims were first taken before burial.

In fact, the city ended its two-month shutdown after only 18 days. In all, 829 residents died of the flu through February 1919. That's out of a city of roughly 200,000. At Camp Gordon, 166 died. A Red Cross nurse later died as well after treating the soldiers. 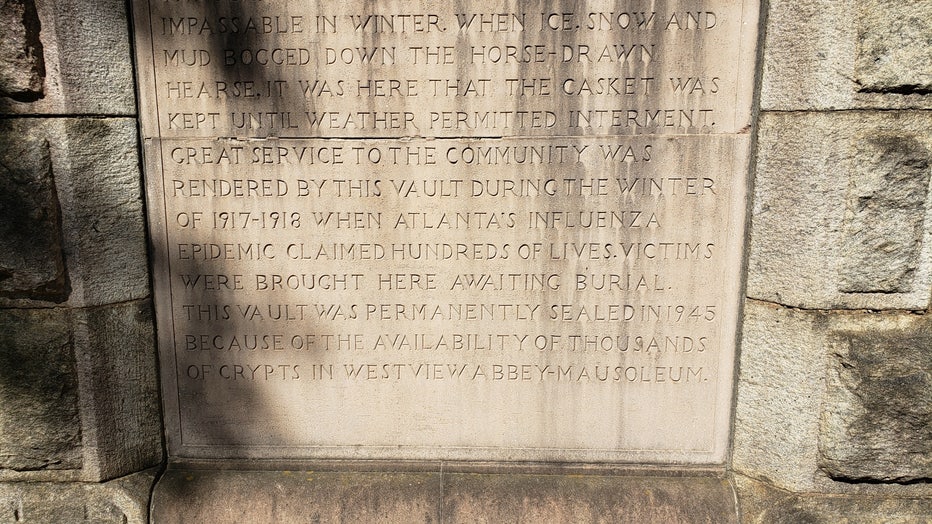 The carving at Westview Cemetery explains the receiving vault's role in the Spanish Flu.

Spanish Flu is believed to have killed 20 million around the world.

“The curve went sharply down," said Hitt who studied military and Atlanta newspaper records extensively. "And the one thing that was trial and error they were doing that really seemed to work was wearing the mask. All the time.” 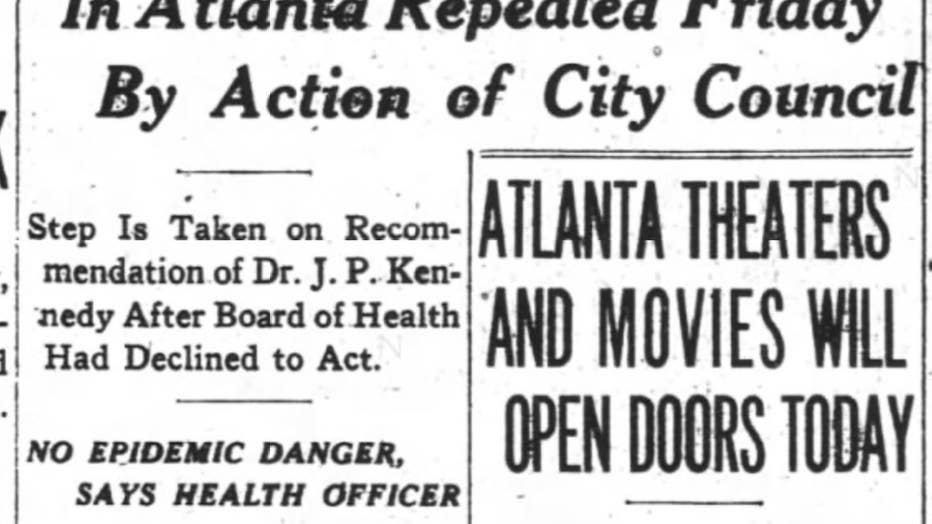 Atlanta's ban on public gatherings was supposed to last two months. After citizens embraced wearing masks in public, the ban was lifted after 18 days. (Atlanta Constitution)

Time can teach us a lot. Sometimes the lesson is as clear as the mask on your face.