Speaking at the Georgia State Capitol Wednesday, Kemp and health officials said that COVID-19 "was hitting our state hard" and that he will be extending the order until April 30, 2020.

All provisions of shelter in place will remain in effect, the governor said.

The governor said he has also signed an executive order suspending short-term vacation rentals across Georgia, which will go in place at midnight Thursday. The order does not include hotels, motels, extended stays, or long-term rentals. If someone has fully paid their reservation, they are still permitted to use the rental, Kemp said, but all others have to cancel.

FOX 5's Claire Simms recaps the press conference with Gov. Brian Kemp, Dr. Kathleen Toomey, and others from the state coronavirus task force as they announce the extension of the shelter in place order among other new directives.

Citing the danger of the virus to the elderly, Kemp also signed another order aimed at reducing the spread in senior care facilities. The order would ban most visitors, cancel group activities, require health screenings for employees, and require in-room dining services.

Order now in place until April 30

The extension and new orders comes after Georgia passed 9,900 cases of coronavirus. As of Wednesday at noon, over 360 people have died because of the virus.

As part of the shelter-in-place order, restaurants and private social clubs will continue to not open for dine-in services. Take-out, curbside pick-up and delivery are still available.

Here is what is most likely allowed during a stay at home order.

Exceptions to the order include:

The current shelter-in-place order does not reference churches and places of worship, which the governor says he will address later in the week, encouraging churches and faith leaders to be "part of the solution, not part of the problem."

Kemp previously said he will be enforcing the shelter-in-place restrictions using law enforcement. People caught not complying with the order will be punished with a fine or misdemeanor. 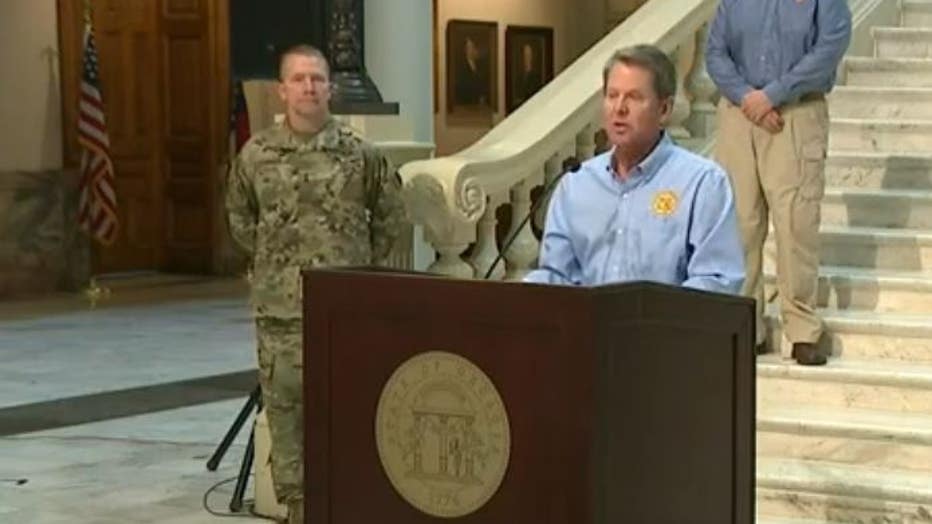 The order keeps Georgia's state parks and beaches open, which has drawn criticism from mayors and concerns from north Georgia county commissioners. Kemp said he heard their concern and is monitoring the situation, but insisted he wouldn't shut them down unless "something gets out of control."

"I think part of the problem was people didn't understand exactly what it meant to keep the state parks open and have our beaches accessible. It doesn't mean we're going open the beaches up for spring break parties or the Friday afternoon before the July Fourth weekend," the governor said adding the parks and beaches were open for locals to be able to get out and excercise while using social distancing.

The governor also said he will be asking the federal government to help with relief for Georgia’s agriculture industry. The governor said farms already hit hard economically by Hurricane Michael area seeing a good crop this year, but area having problems harvesting it and have lost customers due to restaurants scaling back and falling prices.

“This is another gut punch for our farmers and our farm families,” Kemp said, adding he will make sure the federal government will know of their needs.

He also thanked several new private efforts, including the drive-through testing facility set up this week by CVS on the Georgia Tech campus which can process 1,000 tests a day.

"Expanding access to testing remains a top priority for the coronavirus task force," the governor said.

Kemp also said the state has partnered with Ipsum Diagnostics to increase the testing another 2,000 tests a day within 24 hours.

He issued a call to all medical students and others who may qualify to register and volunteer for the Georgia Medical Reserve Corps. Potential volunteers can learn more here.

Earlier on Wednesday, Kemp, Lt. Gov. Geoff Duncan, and House Speaker David Ralston announced they will be extending Georgia's unprecedented public health state of emergency, which was also set to expire on April 13. That declaration will now be in place until May 13.