Loved ones are remembering the victims of a fiery crash along Interstate 85 in Gwinnett County.

GWINNETT COUNTY, Ga. - Tamika Gooden said she does not know what happened after the van carrying her sister, Normisha Monroe, and 15 others crashed Saturday evening, but she would not be surprised if "Mimi" jumped in to help others.

"My sister would take the shirt off her back to give it to you," Gooden said.  "I just keep telling people over and over again, I can just see her helping other people get out that van and sacrificing her life.  That's just who she was."

According to her family, Monroe, 38, was one of six people who died in the crash after the van they were riding in tipped over and caught fire on I-85.

Gwinnett County Police said they were looking into whether another car was involved in the accident.  They have not yet released the names of those who were in the van.

Monroe and the other women onboard were part of a sober living program called "We Are Living Proof."  Officers said they were headed to a meeting at the time of the crash.

"You know, everybody loves a comeback story and these ladies were comebacks," said Darryll Stinson, a pastor with Life Church International, who worked with the recovery program.  "They had been through all types of unimaginable pain and they had the courage to get help with their addiction and they did the hard work."

'She never met a stranger'

People who knew Monroe said she saw the good in everyone and was always willing to lend a helping hand. 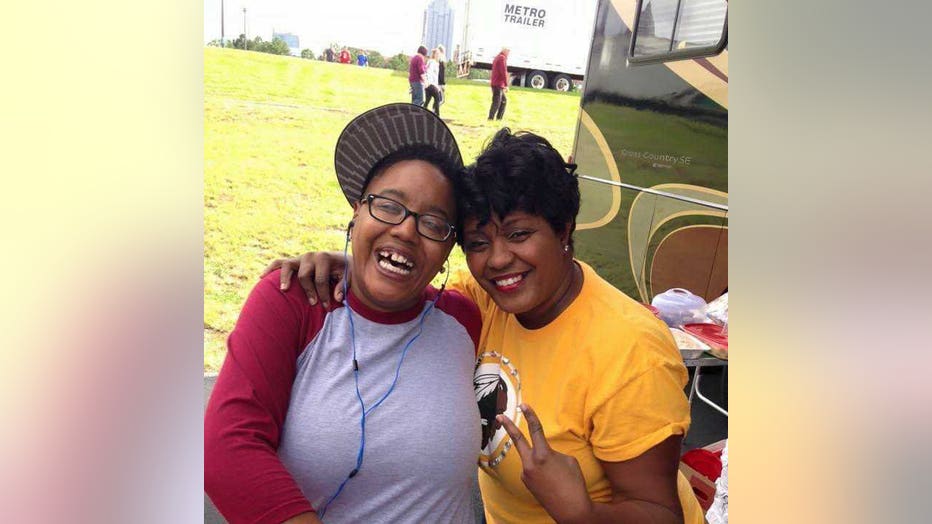 Normisha Monroe with her sister. She died in a passenger van crash on I-85 Saturday.

Pastor Stinson said he would often take photographs at church and Monroe, who went by the nickname "Normi" in recent years, was one of his favorite subjects to capture.

"She had the 'it factor.'  "She had that contagious personality that when you're around her you can't help but to laugh.  Like, I just like you--that instant likability factor," said Stinson.  "I would always get these best candid moments of her looking someone in the eye and high-fiving them."

Stinson said he had just talked to Monroe last week and she asked him when he planned to produce a video to share her recovery story.

"I just want people to know that like, as tragic as this story is, this is exactly the hope she wants to release to the world because her story is being told and you guys are helping with that.  So, thank you and live your comeback story," said Pastor Stinson.

Gooden said she plans to hold a balloon release and candlelight vigil to honor her sister's life this weekend.

"It's definitely too soon, but she is such an awesome person, I mean, heaven is going to be so excited about having her," smiled Gooden.  "They are, [be]cause I mean, she is just like the life of the party.  You know, just everything. She is just a great, great person."