6 dead after a car crash in Gwinnett County

Nearly 12 people were also injured when a van flipped over and caught fire on I-85.

There were 16 people in the van, which belonged to a sober living group, according to the Gwinnett County Police Department.

According to the Gwinnett County Police Department, the traffic accident happened around 6:30 p.m. on Saturday in the northbound lanes of I-985 in Suwanee.

Gwinnett police on Sunday confirmed there were 16 total occupants in the 2002 Dodge Ram Van.

An accident report states the van was approaching the I-985 split, traveling north, when an unknown vehicle unexpectedly changed lanes in front of it. The van lost control and rolled onto its side before sliding across two lanes on I-985 and striking the guard rail, police said.

Police said all 10 surviving passengers were treated for serious injuries.

Donnie Richeson was heading home to North Carolina when he saw the accident and got out to help.

"It was just a pretty chaotic scene. I was just trying to help. A lady approached me and said she felt like she was on fire," Richeson said. "I tried to console her and get her down to the ground."

Gwinnett police said the van was taking members of "We Are Living Proof" to a meeting in Buford.

"Today [Sunday] was going to be their graduation day. Not all of them but some of them. They were a support group for each other," Richeson said.

Richeson said a group including two off-duty paramedics, nurses, and those who couldn’t sit by raced to help.

"It had already started blowing tires out and airbags were going off. It was way too late to get to anyone. One girl said her friend was in there but it was way to late to turn back and go in. The heat was just so intense you couldn’t get within ten feet," Richeson said.

There was one thing that Richeson can’t get out of his mind.

"The thing that sticks in my mind was that lady caught on fire. All of a sudden her hair went up in flames. Someone had a jacket and I grabbed it to help put the fire out on her head," Richeson said.

Police are still working to determine what caused the passenger van to crash and catch fire.

Police said witness statements indicated another vehicle may have been directly or indirectly involved in this incident. 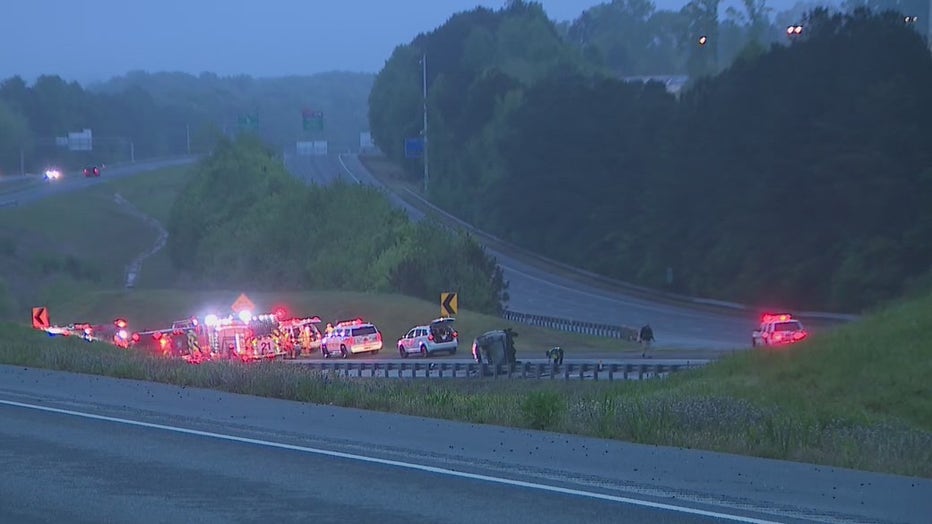