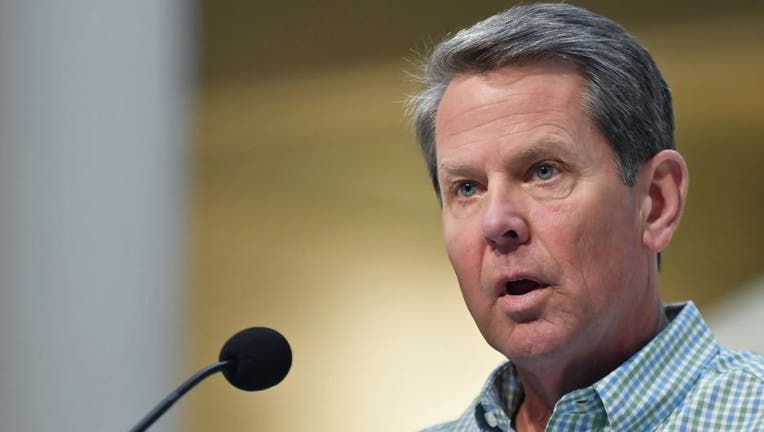 Georgia Governor Brian Kemp gives an update on the state's fight against the coronavirus (FOX 5 Atlanta).

ATLANTA - Georgia Gov. Brian Kemp expressed his disappointment in Saturday's federal COVID-19 relief bill, claiming it favors California and New York, and called for Georgia's senators to "level the playing field" when it's their turn to vote for the bill.

"It is very disappointing to see Georgia Democrats vote to send $1.3 billion less to our state than previous federal aid formulas would have allocated to the Peach State. Instead of using allocation formulas that enjoyed bipartisan support and provided funds based on population, this legislation rewards lockdown states with high unemployment rates.

"Those additional funds could be utilized to get every student back in the classroom five days a week, expand internet access to rural and underserved communities, increase support for Historically Black Colleges and Universities, provide aid to families who adapted to virtual learning, and strengthen community and local government responses to the pandemic.

"I strongly urge our two U.S Senators to use their considerable influence in an evenly divided Senate to level the playing field for hardworking Georgians and put the people of our state ahead of Chuck Schumer and Nancy Pelosi’s pandemic politics."Out of all fifty states, this bill hits Georgia the hardest and rewards California and New York the most."

The bill that advanced from the House floor early Saturday morning passed on a near party-line 219-212 vote. Not a single Republican voted in favor of the bill.

That ships the massive measure to the Senate, where Democrats seem bent on resuscitating their minimum wage push and fights could erupt over state aid and other issues.

Democrats said the still-faltering economy and the half-million American lives lost demanded quick, decisive action. GOP lawmakers, they said, were out of step with a public that polling shows largely views the bill favorably.

Hoping to revive the effort in some form, Senate Majority Leader Chuck Schumer, D-N.Y., is considering adding a provision to the Senate version of the COVID-19 relief bill that would penalize large companies that don't pay workers at least $15 an hour, said a senior Democratic aide who spoke on condition of anonymity to discuss internal conversations.

The Senate is expected to vote on the bill next week.