A new law was signed on Monday toughening the penalties for street racing, dragging, and reckless driving.

ATLANTA - Georgia now has tougher penalties for those convicted of drag racing or stunt driving.

"Our goal is simple: to protect every family in every community," said Kemp.

Under the new law, anyone convicted of "reckless stunt driving" will have their driver's license suspended and be subject to fines and jail time.

A street racer's license is being suspended after police say officers caught him going 143 mph.

Anyone convicted of drag racing on a highway or private property would also face graduated penalties within a ten year period:

Kemp said the law gives local law enforcement more to work with when it comes to fighting illegal street racing and related activities.

"That's really something that came from a breakfast that we had with the sheriff, the DA and all these local metro police chiefs," Kemp explained. "It's like, look, we got to have some tools to fight this crowd with cause this revolving door of just writing tickets or taking somebody down one night and they're back at it the next night is not getting the job done and so, that's what we did." 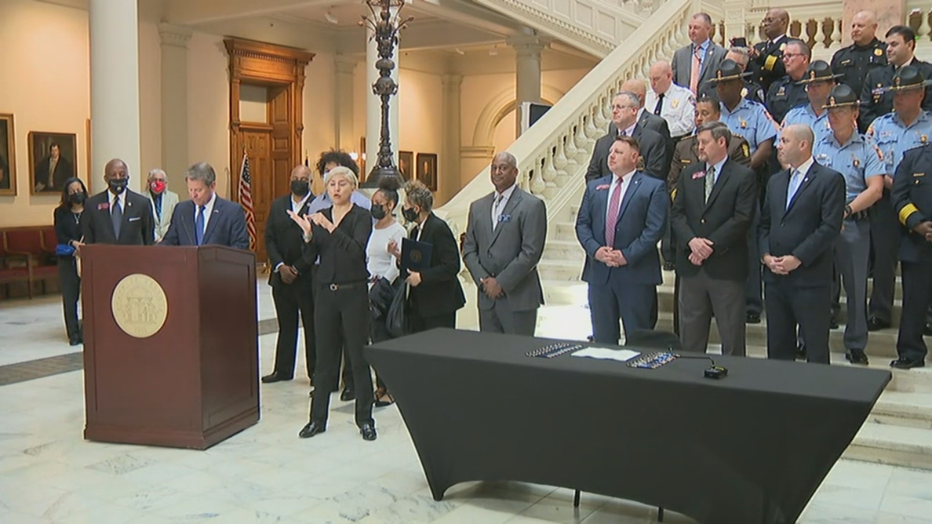 State Sen. Emmanuel Jones, D-Decatur, carried the bill in the Senate for the governor after filing his own street racing legislation earlier in the year. Jones' bill was named for Jaye Sanford, a DeKalb County mother who was killed when a street racer collided with her car in November 2020.

Sanford's family stood behind Kemp as he signed the legislation. Her son, Jason Sanford, 21, said he has mixed emotions about the law because it reminds him of his mother's untimely passing.

"I do feel like this bill will prevent deaths because nobody should have to go through what my family has been going through. I feel like this bill will help other families not suffer any more loss," said Sanford. "I do think that's positive, but I would also like to create something more positive and peaceful to celebrate my mom's life and legacy."

The law went into effect with the governor's signature.