Fulton County DA Fani Willis thanked her team for their work in catching up to a backlog of violent criminal cases since she took office. She also said the investment made by the Fulton County Board of Commissioners was crucial to properly staffing her office.

FULTON COUNTY, Ga. - Fulton County District Attorney Fani Willis says no one charged with homicide or sexual offenses will be set free on bond despite the county's backlog of cases Wednesday.

A court deadline, suspended during the pandemic, is now looming. It gives prosecutors 90 days to indict a defendant or let them out of jail on bond. Speaking to the press, Willis called the deadline a "crisis" for the county that was caused by the pandemic and mismanagement.

According to Willis, her predecessor Paul Howard left over 11,000 closed cases that still need to be processed and archived. Despite her team's work over weekends and holidays, the district attorney says a rise in crime in the area has continued to add more to their plate.

Fulton County DA Fani Willis said people charged with homicide, sexual offenses and violent criminal histories since she took office will not be released due to a backlog of cases from the pandemic. Willis said her staff has more work to do in catching up to cases that weren't prosecuted while grand juries were suspended.

A DA has 90 days from the point of arrest to indict someone or let them out on bond.  That rule was suspended when the courts were closed because of the pandemic. But now the clock is running again.

"The average lawyer and investigative team can put together about 10 to 12 cases a week for indictment. It's simple math. I got to work with 12,000 cases," Willis previously told FOX 5's Dale Russell.

However, on Wednesday, Willis that no one charged in the county with homicide, a sexual offense, or with 'vile criminal histories" will be released due to a lack of an indictment. 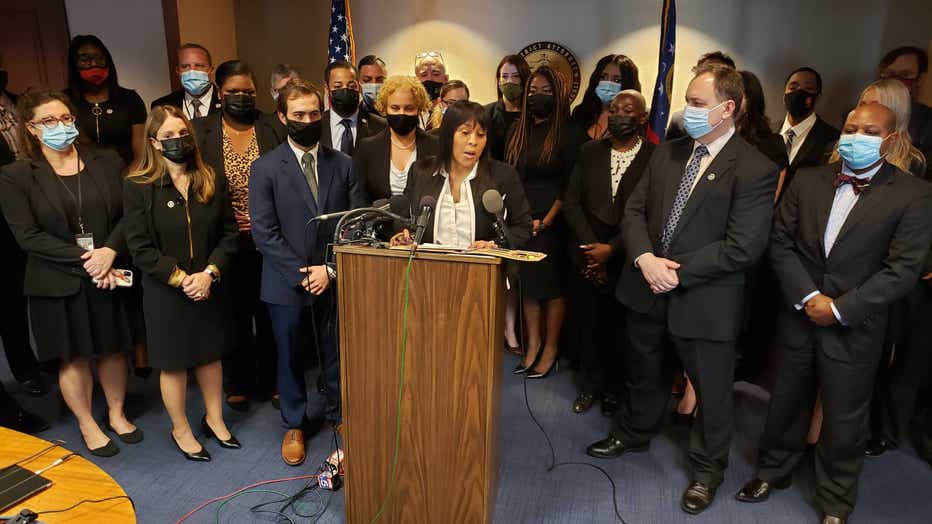 "My team has ensured most vile sexual offenders have been indicted and charged," she said.

"These offenders will not be out to re-offend," she said, adding that she was tired and relieved.

Willis has been begging the Fulton County Commission for more prosecutors, staff, and resources. Her problem: investigating and prosecuting crimes is a slow, labor-intensive process.

The county, using federal COVID-19 money, did approve the hiring of 74 temporary employees. The Fulton County Manager’s office says it is "supportive and committed to helping the District Attorney in any we can" in her battle to erase the backlog.

Fani Willis says those temporary employees will help handle the COVID-19 backlog, but with 12,000 criminal cases on top of that, she needs permanent help has asked County Commissioner for 55 more staffers.