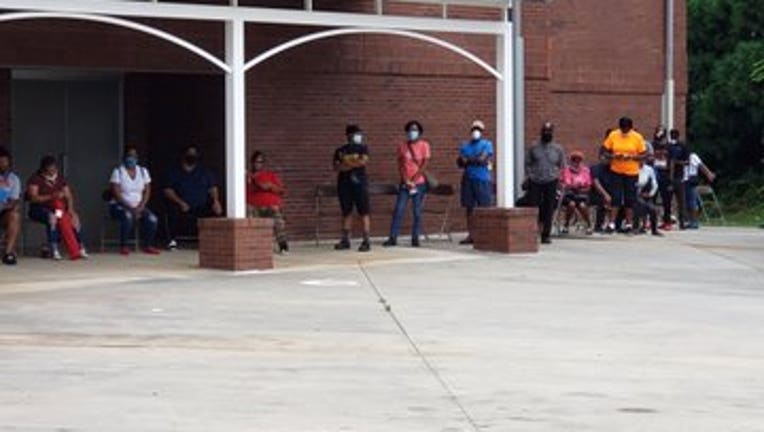 In a statement, Fulton County officials say they have extended voting until 9 p.m. at all locations. Any voter in line at that time will still be able to vote.

"Today is the first election in most poll workers in Fulton County and across Georgia operated the new election equipment introduced this year," a spokesperson for Fulton County said. While the majority of polling places operated smoothly, a number of sites experienced challenges with equipment throughout the day.

A number of problems across metro Atlanta including long lines, lack of paper ballots, and issues with the new voting machines as Georgian take to the polls for the Primary Election.

Starting at 7 p.m. ballots will no longer be scanned. Instead, officials will place those ballots into provisional ballot envelopes.

In some Georgia precincts, voters waited for as long as five hours amid reports of troubles with the state's new voting system that combines touchscreens with paper ballots. FOX 5's Marc Teichner said voters were having to fill out paper ballots at C.T. Martin Rec Center where machines weren't working.

Atlanta Mayor Keisha Lance Bottoms acknowledged the problems on Twitter, saying that voters in line at one of Atlanta's largest precincts had reported all their voting machines were down.

"Now being told the line is out to the street at Sandtown Recreation Center," Bottoms tweeted. "Their machines are not working either."

Even with the alleged technical problems, Bottoms urged Atlantans to stay in line.

“If you are in line, PLEASE do not allow your vote to be suppressed,” the mayor tweeted. "They should offer you a provisional ballot if the machines are not working."

The mayor said she hoped the problems and long lines would "not be a preview of November."

Issues have been reported at a number of polling stations across Atlanta.

Speaking to the Fulton County Election's Board, Fulton County Director of Registration and Elections Richard Barron said he predicted that turnout will exceed 2018's election turnout of around 20%.

"By now you know that this election was one unlike any other that we have experienced. The COVID-19 pandemic forced us to make a much more aggressive push for absentee voting as it also created unique staffing and logistical challenges," Barron said. "We had several poll locations shift or consolidate as they became unavailable due to our current situation."

Barron said the majority of Fulton County precincts had "minimal issues" throughout the day and it was a "learning experience."

"We have identified several areas for improvement to help us be better prepared for the General Election in November. Specifically, these include our absentee ballot process, tailoring poll worker training to emphasize the issues we identified today, and undertaking an efficiency review for other process improvements," he said.

Even before Georgia voters ran into problems Tuesday, Georgia Secretary of State Brad Raffensperger warned that results may be slow to come in as poll closures and virus restrictions complicate in-person voting and counties process a huge increase in ballots received by mail.

"There will be lines," Sec. Raffensperger explained.

Raffensperger joined Good Day Atlanta Tuesday morning to talk about the reported issues taking place at the polls. He said Fulton County should be "embarrassed by their performance."

"It's unacceptable," he said.

Later on Tuesday, Raffensperger announced plans to investigate voting problems that plagued Fulton and Dekalb counties, where roughly half the population is black.

"My office has opened an investigation to determine what these counties need to do to resolve these issues before November’s election," he said in a statement to FOX 5.

Raffensperger also noted most polling stations across the state were running smoothly, including Cobb County, one of the largest counties in the state.

Fulton County Board of Commissioners Chairman Rob Pitts spent Georgia's Primary Election Day going from prescient to precinct try to determine the needs at each and just what went wrong.

“We are hearing anecdotes from around the state – particularly in Fulton County – this morning of unacceptable deficiencies:  poll workers not being properly trained, voting equipment not working and absentee ballots not being received among other issues," Ralston said in a statement to FOX 5.

Gabriel Sterling, who managed the rollout of Georgia’s new $120 million voting system, said he had heard of no “actual equipment issues” but rather of delayed deliveries of voting equipment and problems with polls workers “not understanding setup or how to operate voting equipment.”

Some voters had to wait up to two hours to vote due to voting problems and new voting procedures amid the coronavirus pandemic.

Since the pandemic began, states have been scrambling to address concerns of voting in person. The nation’s elections rely on poll workers, many of them older, and neighborhood locations such as schools, recreation centers and senior living communities for polling places.

Many states, including Georgia, have pushed to expand the use of absentee ballots in the hopes of reducing the number of people voting in person. For the first time, Georgia sent absentee ballot applications to all active registered voters, although many reported on Tuesday that they never received them.