Perdue throws hat into the ring

In a video on Monday, Perdue criticized Democratic candidate Stacey Abrams, saying he will make sure she "is never governor of Georgia."

"To fight back, we simply have to be united," Perdue said. "Unfortunately, today, we are divided, and Brian Kemp and Brad Raffensperger are to blame. Look, I like Brian, this isn't personal. It's simple. He has failed all of us and cannot win in November."

Perdue's bid for the governor's mansion comes Abrams announced on Dec. 1 that she would run for governor again. Abrams narrowly lost to Kemp in the 2018 gubernatorial election. 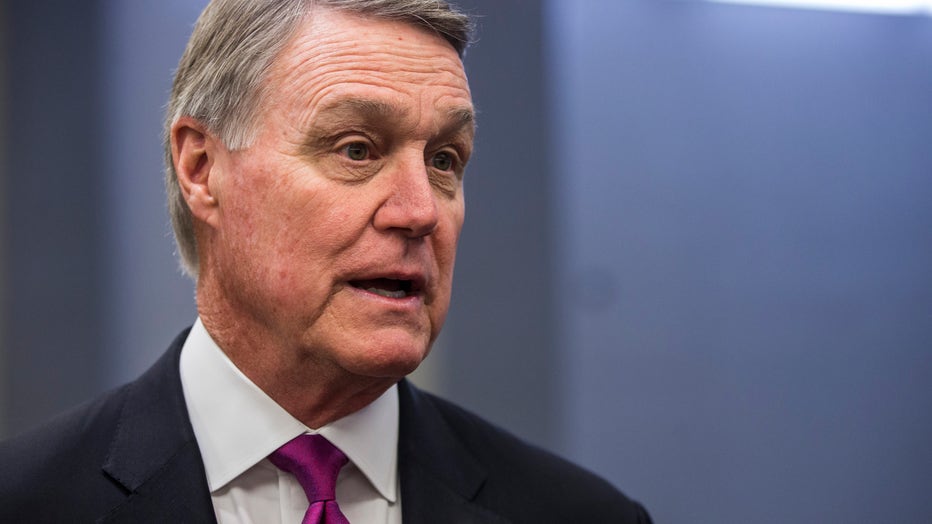 Former state Rep. Vernon Jones — a Democrat turned Republican and major Trump supporter — earlier this year launched a primary challenge against Kemp.
Perdue served as a United States senator from Georgia from 2015 to 2021.

He was defeated by Democratic Sen. Jon Ossoff in the January runoff.

In preparation for the announcement, the campaign website for Perdue went live Sunday night.

DAVID PERDUE DECIDES NOT TO RUN FOR US SENATE IN 2022

Prior to his career in politics, Perdue served as the CEO of Dollar General and Reebok.

Perdue was linked to the 2020 congressional insider trading scandal for allegations of STOCK Act violations. The basis was stocks he sold before the 2020 stock market crash allegedly using knowledge from a closed Senate meeting.

Gov. Brian Kemp will soon be running against political heavyweights on both sides of the aisle. Former Sen. David Perdue's gubernatorial campaign website is already running. He's expected to announce as soon as Monday.

The U.S. Department of Justice closed its inquiry in mid-2020, declaring him free of any charge.

Gov. Kemp put out a statement via a spokesperson Sunday, saying:

"The man who lost Republicans the United States Senate and brought the last year of skyrocketing inflation, open borders, runaway government spending, and woke cancel culture upon the American people now wants to lose the Georgia governor’s office to the national face of the radical left movement. It may be difficult for David Perdue to see this over the gates of his coastal estate, but Joe Biden’s dangerous agenda is hitting hardworking Georgians in the wallet and endangering their livelihoods - and we all have David Perdue to thank for it.

"Perdue’s only reason for running is to soothe his own bruised ego, because his campaign for U.S Senate failed to inspire voters at the ballot box - twice. Governor Kemp has a proven track record of fighting the radical left to put hardworking Georgians first, while Perdue is best known for ducking debates, padding his stock portfolio during a pandemic, and losing winnable races."

"While David Perdue and Brian Kemp fight each other, Stacey Abrams will be fighting for the people of Georgia. Both Kemp and Perdue would deprive 500,000 Georgians of health coverage that our taxpayers already paid for. Both would continue to underfund our schools, both would continue to divide Georgia and both would continue reckless decisions that have endangered the lives of Georgians during the pandemic. Only Stacey Abrams will lead to create One Georgia in which all of our people, regardless of zip code, background or access to power, have the opportunity to thrive."

"Wow, it looks like highly respected Senator David Perdue will be running against RINO Brian Kemp for Governor of Georgia. David was a great Senator, and he truly loves his State and his Country. This will be very interesting, and I can’t imagine that Brian Kemp, who has hurt election integrity in Georgia so badly, can do well at the ballot box (unless the election is rigged, of course). He cost us two Senate seats and a Presidential victory in the Great State of Georgia."