Republican Gov. Brian Kemp of Georgia says he’ll make a clear contrast between himself and likely 2022 Democratic nominee Stacey Abrams as he gears up for a potential titanic rematch with Abrams in next year’s gubernatorial election in the key general election battleground state.

And Kemp, who is facing the wrath of Donald Trump as the former president aims to support a Republican primary challenger to oust the governor next year, says he’s not taking "anything for granted in a primary or general election" but promises that "nobody's going to outwork me."

Kemp, in his first national interview since this week's gubernatorial campaign announcement by Abrams, told Fox News on Thursday that "I've been gearing up for this for three years." And he described the looming rematch with Abrams as "a fight for the soul of our state, again."

Abrams, the former Georgia House Democratic leader who in 2018 made history as the first Black woman gubernatorial nominee of a major political party, narrowly lost to Kemp by less than 55,000 votes out of nearly 4 million cast in the Peach State’s gubernatorial election. In the 2020 election cycle, the voting rights advocate was instrumental in helping now-President Biden become the first Democrat to carry the state in a presidential election in nearly three decades and in fueling the Democrats' sweep of Georgia's Jan. 5 twin Senate runoffs, giving them the majority in the chamber. 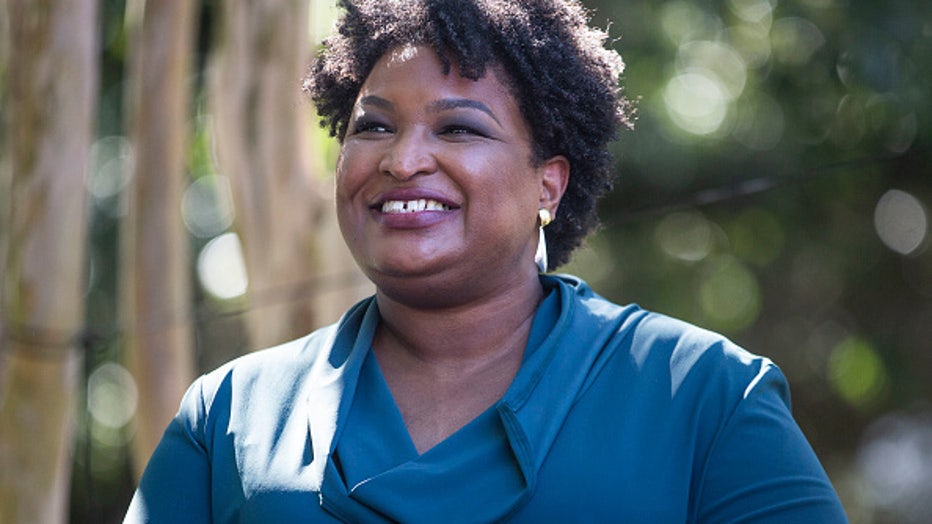 Former US Representative and voting rights activist Stacey Abrams is introduced before speaking at a Souls to the Polls rally supporting Former Virginia Gov. Terry McAuliffe on October 17, 2021 in Norfolk, Virginia. Virginia will hold gubernatorial a

Looking ahead to next year’s campaign, the governor spotlighted "a clear contrast" between Abrams and what he called "the conservative leadership that I’ve provided, keeping our economy open, keeping our schools open, keeping our churches open, standing with law enforcement."

Kemp, who was one of the first governors to reopen last year after the coronavirus pandemic swept the nation, also took aim at the Biden administration’s record in office, arguing that "nobody likes the federal overreach that we’re seeing and all the things that are coming along with it. Thirty-year highs in inflation, the disaster we’ve seen at the border. Every state in the country’s dealing with that. The disastrous pullout in Afghanistan."

And the governor emphasized that "I’m running on the record that I ran on in 2018 when I told people what I was going to do, and I’ve been doing that and people can look at that record."

He touted "making Georgia the number-one state in the country for business, growing our economy even in the middle of a global pandemic, largest teacher pay raises in state history, passed 52 health care bills dealing with transparency and antiquated outdated rules and regulations, lowering private sector health insurance costs but also working to provide more access to the needy that are out there."

And Kemp pledged to showcase the voting bill he signed into law earlier this year, which Democrats decried as a voter suppression measure.

"Georgians support the ability to participate in elections but also making sure they’re secure, and that’s what this bill does," Kemp stressed. He highlighted the voter ID requirement on absentee ballots, the securing of drop boxes, continuous counting on election night, and allowing counties to add additional days for weekend voting. 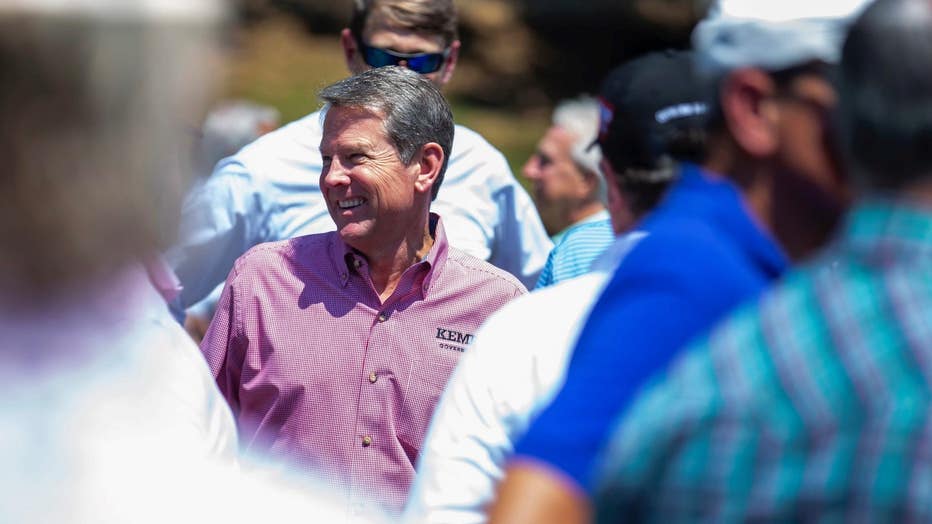 Kemp said he’s been "gearing up politically" for another difficult election.

"After the last governor’s race and what we saw in 2020, I’m no fool to the situation that we’re in. I know that it’s a tight environment, just like it was in Virginia. We’ve got to work extremely hard," he noted.

"I know that I’ve got to raise twice the money that I raised in ’18 because of what Stacey Abrams did. We got outspent two to one, even as I raised record amounts of money," he said.

Touting his impressive war chest, Kemp said, "I had a record first quarter fundraising for a Republican governor in our state. We’ve already broken that record, and we’re not even at the end of this quarter." And he also noted that "we’ve been gearing up our grassroots campaign."

While Abrams isn’t expected to face any serious competition for the Democratic gubernatorial nomination, Kemp remains at the top of Trump’s list of GOP enemies.

Trump’s vowed to return to Georgia to campaign against Kemp to punish his onetime ally for following his constitutional duties by refusing to help the then-president’s efforts last year to overturn the election results in Georgia when Biden edged Trump by a razor-thin margin.

But the Republican Governors Association (RGA) is firmly backing Kemp, highlighting that "over the past four years, Governor Kemp has exhibited courageous leadership for Georgians and guided his state through a turbulent time."

Hours after Abrams declared her candidacy, Trump predicted that she’ll be defeated again in 2022 before adding that "it will be hard to do with Brian Kemp, because the MAGA base will just not vote for him after what he did with respect to Election Integrity…"

Stacey Abrams on why she is running for governor in 2022

FOX 5 goes one on one with gubernatorial candidate Stacey Abrams as she explains her plans for Georgia.

In an example of strange bedfellows, the Abrams campaign told Fox News "we agree with Donald Trump on this point: Brian Kemp has been a horrible governor for the State of Georgia."

Pointing to his record of accomplishments in office, he said, "I think that’s what the base wants, whether they’re a Kemp base, a Trump base, or whoever they are. I’m focused on issues that Georgians care about. I can’t control the noise from other parts of the country, no matter who’s making those statements."

Asked about the possibility of Perdue launching a primary challenge, Kemp noted that "I worked extremely hard for the president. I worked extremely hard for David Perdue and Sen. Loeffler and the rest of the Republican ticket all the way down to local races. I did over 80 political events for the Republican Party and Republican candidates all over the state to help us in 2020. Obviously we weren’t successful even though we had a good night with our legislative candidates."

And he said that "David’s told me he was going to support my campaign for governor. Until something happens otherwise, I’m going to keep doing what I’m doing. I can’t control who may be getting in the race."

And taking an apparent jab at Perdue's reasoning for jumping into the race, the governor said, "I’ve been in the fight for all these issues … I’m going to keep being in the fight. You know if somebody else wants to get into that fight, you just have to ask them why?"