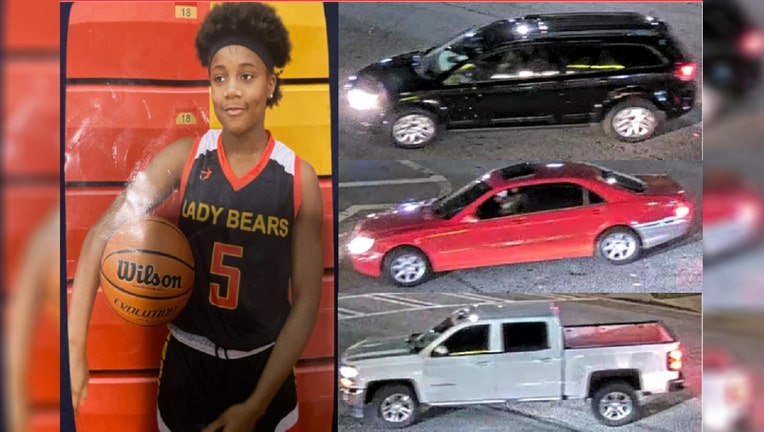 Crime Stoppers Atlanta released a photo of Diamond Johnson, left, who was shot during a shooting on May 1, 2021. Police are searching for 3 vehicles that were nearby, left, during that time.

ATLANTA - A $5,000 reward is being offered for information leading to the arrest and indictment of the shooter involved in a deadly shooting across the street from Maynard Jackson High School on Saturday evening. Atlanta police have released photos of three vehicles that were in the area when a 15-year-old girl was gunned down. Two other teens were injured in that shooting.

It happened at 790 Glenwood Avenue shortly before 10 p.m. Diamond Johnson, 15, and two other teens were found by officers near the Waffle House suffering from gunshot wounds, police said.

All three were rushed to Grady Memorial Hospital where Johnson later died.

The windows to the Waffle House were shattered by gunfire. A makeshift memorial was set up outside the next day to remember the teen.

On Monday, investigators released photos of three vehicles in hopes someone would recognize the owners or drivers that night. The cars are a black 4-door hatchback, a red 4-door sedan, and a white or gray extended cab pickup truck.

Anyone with information on the case is asked to call the Crime Stoppers Atlanta tip line at 404-577-TIPS (8477). Tipsters can remain anonymous and still be eligible for the reward.