Demonstrators march around the country on the one-year anniversary of Georgia Floyd's death.

ATLANTA - Dozens of demonstrators and activists gathered in downtown Atlanta Tuesday to honor the life of George Floyd.

May 25 marks one year since a Minneapolis police officer killed Floyd.

That push is still happening a year later.

The demonstrators said, unfortunately, there is still a lot of work to do regarding policing despite pleas worldwide.

"It's good to know that the work we did last year didn't go in vain but nothing has really changed," Stephen Jackson, a close friend of Floyd's and the godfather to his daughter, said. "They still killing us."

Jackson talked with FOX 5 during the rally.

"I can't be that person that's just selfish that says 'okay, my brother got justice, now I don't care.' That's not in my heart. I inherited the voice for so many other people," Jackson said. 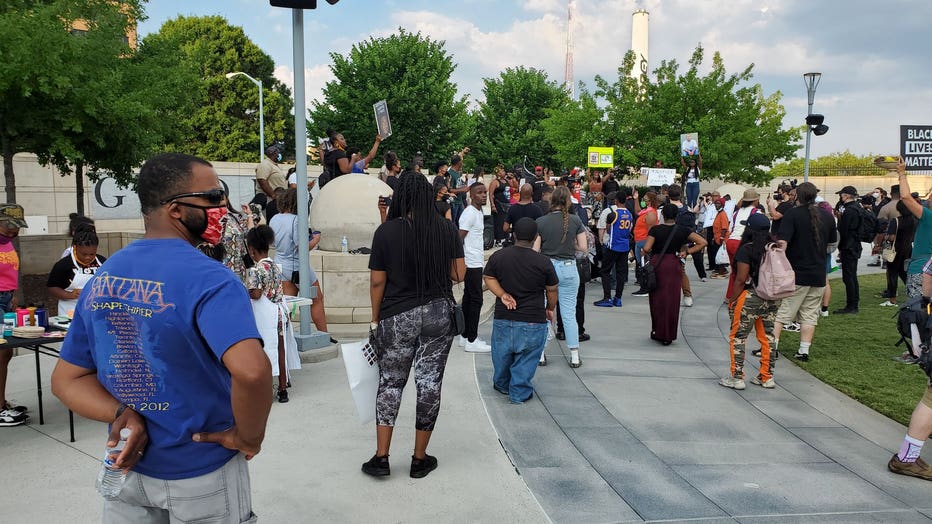 Those people include the mothers who stood side by side Tuesday. They've all lost sons here in Georgia during encounters with law enforcement.

"When you lose a child, it's hard," Tammie Featherstone, whose nephew was killed in 2019 said. "To lose it to the ones that supposed to protect and serve us makes it even harder and it's happening every day."

The mother of Jabril Robinson, Dalphine Robinson, spoke about the importance of the mothers sticking together.

"We're gonna let y’all know that we're not taking it and we are tired and we are not going to continue to let it happen, not to our loved ones," Robinson said.

The son of Oscar Cain, who was also killed in 2019, spoke about his father saying "my dad was a good person. He was loving, caring, goofy, and determined."

Organizers said this rally is so important to make sure people don't forget what happened one year ago.

Here is what they had to say about what they believe will really spark the police reform and social change they want to see.

"It starts with local government," restaurant owner Walter Jordan explained. "We must get the right people in office and we can't vote for people because we went to college with them, we know them personally. We have to vote for people who are fighting for what's right."

Jackson went on to say "we have to start taking care of each other first and we gotta stop killing each other. Stop fighting each other. We need all races to get this done."

Organizers said this is something they'll do yearly to honor Floyd’s life and continue their mission for social justice and reform.