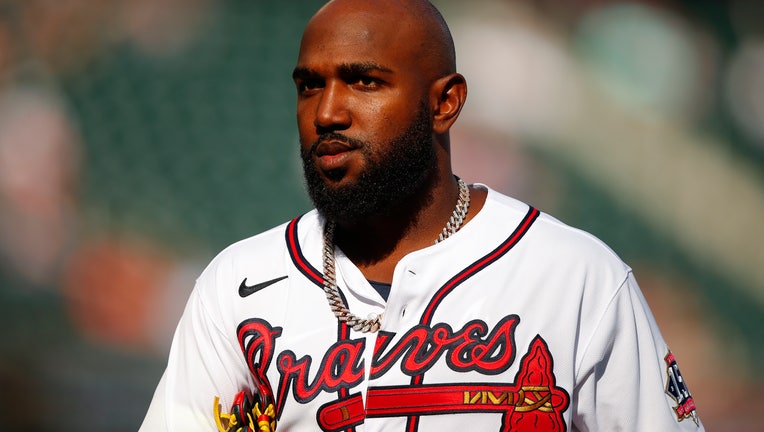 ATLANTA, GA - APRIL 25: Marcell Ozuna #20 of the Atlanta Braves looks on in the fifth inning of game 2 of a double header against the Arizona Diamondbacks at Truist Park on April 25, 2021 in Atlanta, Georgia. (Photo by Todd Kirkland/Getty Images) (FOX 5 Atlanta)

Ozuna was arrested in May in Sandy Springs after an alleged incident when officers witnessed him strangling his wife. Ozuna was on the injured list at the time of the incident.

In a statement Monday, Major League Baseball said Ozuna was on unpaid administrative leave between Sept. 10 and the conclusion of the 2021 season. Commissioner Rob Manfred called the retroactive suspension "appropriate" in a statement on Monday:

"My office has completed its investigation into the allegations that Marcell Ozuna violated Major League Baseball’s Joint Domestic Violence, Sexual Assault and Child Abuse Policy. Having reviewed the totality of the available evidence, I have concluded that Mr. Ozuna violated our Policy and that discipline is appropriate."

"Any instance of domestic violence is unacceptable, and we fully support the decision by the Commissioner’s Office regarding Marcell. We are encouraged to know that Marcell has accepted full responsibility for his actions and is taking the necessary measures to learn and grow from the situation."

The Braves signed Ozuna to a four-year contract prior to the 2021 MLB season. The contract has an option in 2025.

The last game Ozuna played for Atlanta was on May 25.

The Fulton County District Attorney's office dropped felony charges against Ozuna after an investigation and decided to charge him with battery and simple assault, both misdemeanors.

Ozuna entered into a pre-trial intervention program after entering an agreement with Fulton County prosecutors.