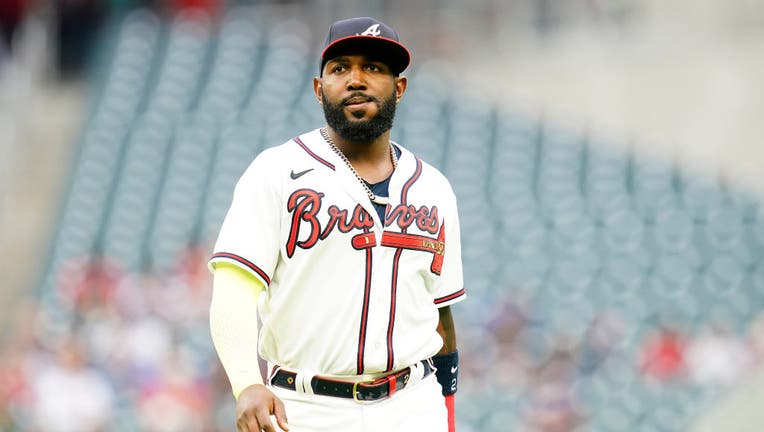 Marcell Ozuna looks on during a game between the Toronto Blue Jays and the Atlanta Braves on May 11, 2021. (Photo by David J. Griffin/Icon Sportswire via Getty Images)

FULTON COUNTY, Ga. - The Fulton County District Attorney's office has decided not to charge Braves outfielder Marcell Ozuna with a felony after his arrest in May over allegations of domestic violence.

In court documents obtained by FOX 5, District Attorney Fani Willis decided to charge Ozuna with battery and simple assault, both misdemeanors. Ozuna was originally charged with aggravated assault, strangulation - which is a felony.

Ozuna is accused in the documents of causing "visible bodily harm" and strangling his wife, Genesis Ozuna, at their home in Sandy Springs on Saturday, May 29.

A statement from the Sandy Springs Police Department said officers entered a home where the front door was open and heard screaming from inside. Officers said they saw Ozuna grab his wife by the neck and throw her against a wall, in addition to striking her with a cast on his injured left hand.

Police said the victim had visible injuries but was not taken to the hospital.

Atlanta Braves star Marcell Ozuna was released from the Fulton County jail on Monday after being arrested on domestic-related charges by the Sandy Springs Police Department on Saturday.

In his initial appearance in court, attorneys said the couple was in the process of divorce. Genesis Ozuna was arrested on a domestic violence charge in Miami a year ago after cutting Marcell Ozuna's face by throwing a soap dish at him.

Speaking to FOX Sports Radio, officials with the Sandy Springs Police Department said that they were unaware of the change in charges from a felony to a misdemeanor.

"This is something that could only be done by the Fulton County District Attorney’s Office," Sgt. Salvador Ortega said. "Once we obtained the warrants and made the arrest, the case was turned over to them for prosecution."

Ozuna could face a long suspension by Major League Baseball, which is investigating under the joint domestic violence policy in place between MLB and the players’ union.

He was already on the injured list and expected to be out for more than a month after dislocating two fingers on his left hand while sliding during a game at Boston. He was seen wearing a bright yellow cast in video of his court appearance.

Ozuna re-signed with Atlanta after a stellar first season with the Braves in 2020, agreeing to a $65 million, four-year deal. He batted .338, led the National League with 18 homers and 56 RBIs, and finished sixth in NL MVP balloting.

He was off to a slow start this season, hitting just .213 with seven homers and 26 RBIs at the time of his injury.