Police in Atlanta provide new details on two spa shootings that claimed the life of multiple people. The suspected shooter is in custody.

The image of the fake post, dated at 1:45 p.m. on Tuesday, shows the confessed shooter's name and a photo of him that authorities shared with media outlets as they tracked him through the state following the crimes.

The fake post accuses China of covering up the COVID-19 pandemic.

Police said on Wednesday Long had told investigators he was not racially motivated to target the spas.

Long confessed to all three shootings, one in Acworth and two in Atlanta. 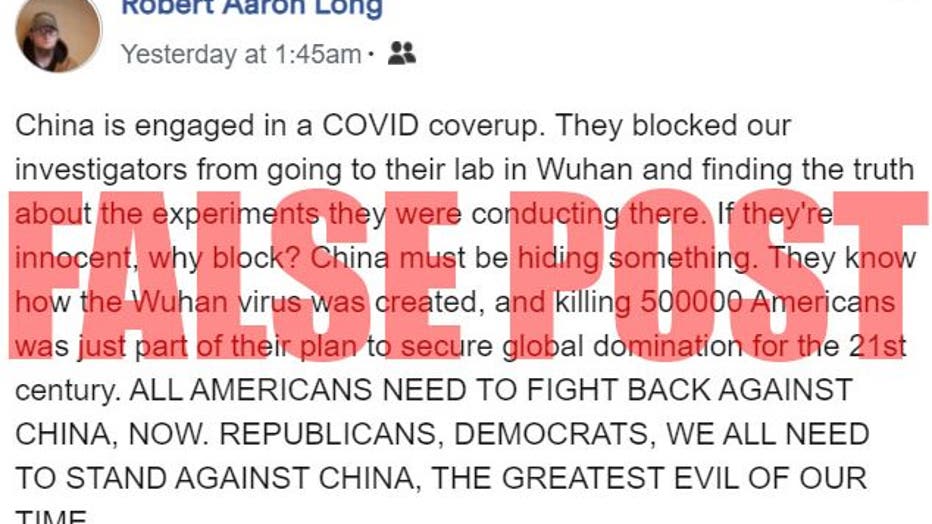 Timeline of the Atlanta-area spa shootings

Police on Wednesday said Long claimed it was a sexual addition, not race or ethnicity, that motivated him to commit shootings at the three Atlanta-area spas.

Authorities said, of the eight victims, six were identified as Asian and seven were women.

"It's a temptation for him that he wanted to eliminate," Capt. Jay Baker with Cherokee Police Department said.

Atlanta Police Chief Rodney Bryant said at a press conference at Atlanta Public Safety headquarters the investigation was still ongoing and authorities are unable to determine if the crime was in fact racially motivated.

"We are still early in this investigation, we can not make that determination at this moment," Bryant said.

Elected officials and civil rights groups have condemned the violence, as some rallied around the Asian American Pacific Islander community in the wake of the shooting.