ATLANTA - The Atlanta Police Department's Auto Crimes Enforcement Unit (ACE), along with other officers, and the air unit were able to arrest a double murder suspect on Thursday.

Sgt. Jarius Daugherty said officers initially tried to stop a vehicle that was thought to be stolen on Wednesday.

Officers requested the help of the air unit to track where the driver was going.

"It did appear the suspects got wind of the air unit and they started driving a little erratically," Sgt. Daugherty said.

'HE WAS AN INNOCENT BYSTANDER': SISTER REMEMBERS OLDER BROTHER GUNNED DOWN DURING DRIVE-BY SHOOTING

Soon after, it turned into a foot chase. The suspects ditched the car and ran into the woods.

"Three suspects bailed out of the vehicle, one suspect was shortly after taken into custody. He was a juvenile. And the second suspect was arrested after an extensive search of the woodline area," Sgt. Daugherty said.

That second suspect was identified as Jontravious Arnold.

Investigators learned he had warrants out for his arrest in connection to a double homicide that happened on July 15.

FOX 5 reported earlier this year, the drive-by shooting happened outside of a liquor store in northwest Atlanta. 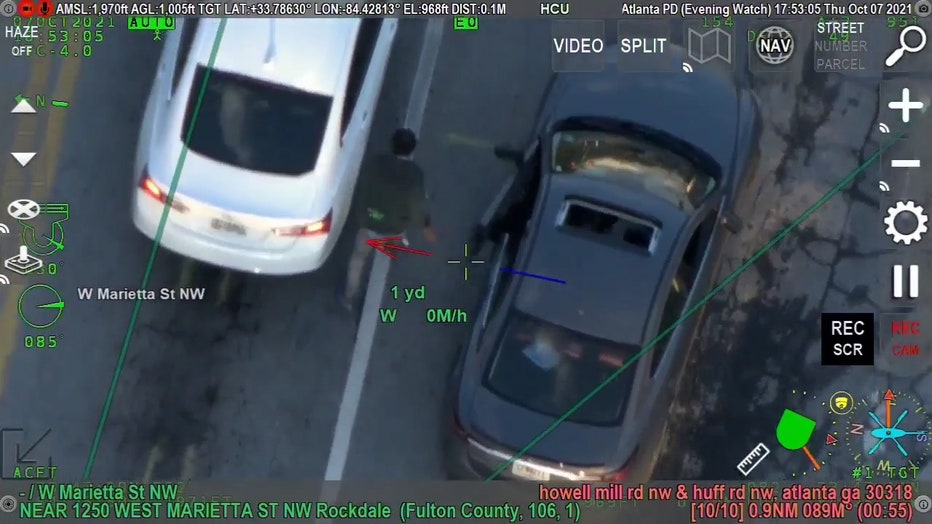 Arnold is the second person to be arrested in connection to the murders.

According to Sgt. Daugherty,  not only was Arnold driving a stolen car, he was allegedly using it to commit other crimes.

"The male in this incident was actually operating a stolen vehicle and we believe he may have been attempting to break into other vehicles, using that stolen vehicle as a vessel to do that," he said.

The juvenile suspect who was a passenger in the car faces charges of Theft by Receiving - Auto and Obstruction (Misdemeanor).

Sgt. Daugherty adds the car Arnold was driving was left running at the time it was stolen.

He reminds everyone to always turn their car off when they're away from it, even if they plan on being back right away.