A Georgia man who says he volunteered at Ground Zero following the September 11th attacks is feeling mounting frustrations over the victims' compensation fund.

HIRAM, Ga. - Joe Grimaldi said he spent eight months as a volunteer at Ground Zero, sifting through the rubble with his K-9 companion, Kilo, a trained cadaver dog.

As soon as the World Trade Center towers fell on Sept. 11, he and Kilo headed to Dobbins Air Reserve Base to get on a flight bound to New York.

"I grabbed my jump bag, and went to Dobbins," he said. "When we got there, we tried to work as long as we could, as much as we could and our dogs are shutting down on us," he said.

While Grimaldi said he would do it all over again in a heartbeat, the Paulding County resident said health issues are mounting.

RELATED: Field of Flags on display in Kennesaw for victims of 9/11 attacks

"I’ve had cancer taken off of my face, I’ve had mold taken out of my lungs, and my sinuses had to be operated on twice," Grimaldi said. "We were breathing brick dust, asbestos, burning jet fuel, steel, glass, decomposing bodies. […] The EPA said it was OK for us to be there."

Two decades later, it’s clear that it wasn’t safe for anyone to be in Lower Manhattan without a respirator mask following the attack.

Since the attacks, an estimated 3,900 people have died because of chronic illnesses thought to be caused by inhaling the toxic particles from the rubble. That’s more than those who died on September 11, 2001, in the attacks themselves. 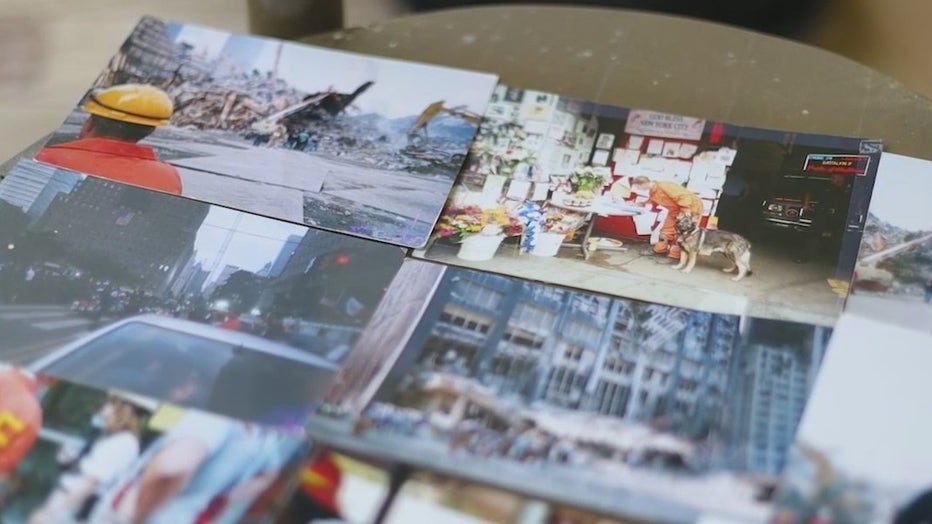 Grimaldi said he was there as a volunteer on his own behalf, and he was teamed up with a crew from Massachusetts to sift through the site for bodies. He said he has since lost contact with those he was working with, and the September 11th Victim Compensation Fund, or VCF, would not accept the dozens of photos of Kilo and him at work at Ground Zero.

FOX 5 reached out to the VCF for answers.

"For privacy reasons, the September 11th Victim Compensation Fund (VCF) can’t answer questions about specific claims/claimants," said Nicole Navas Oxman, a spokesperson for the Department of Justice, which administers the fund. "The VCF is in the business of helping people and wants to reach everyone who is eligible."

Grimaldi said he is not just looking for a paycheck. What he wants is help with all of his medical expenses, and to make sure his family is taken care of.

"I care about the long-term effects, I’ve got teenage sons and a wife," he said, adding that he’s called on lawmakers to help to no avail. "I don’t care if it’s Republican, Democrat, independent. At this point, I don’t care who you are. Just find a way to get us some help. It’s frustration which turns into more anxiety, which spins me into a PTSD episode."

The VCF said it encourages everyone who was at or near the site of one of the attacks, whether you are sick or not, to register with the VCF at www.vcf.gov. It also has a toll-free Helpline at 1-855-885-1555.