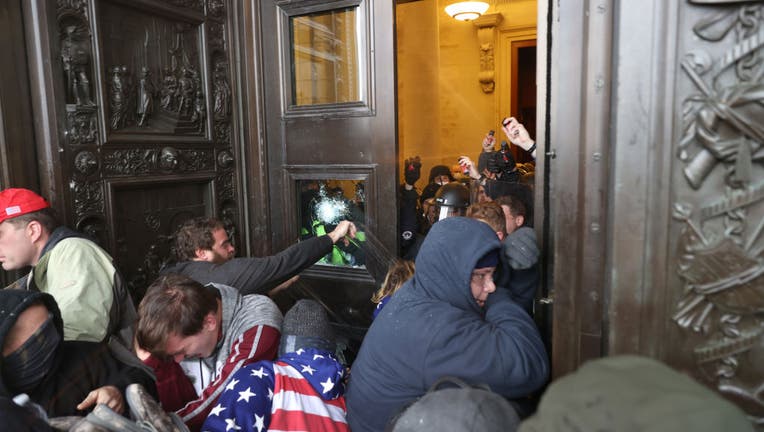 MACON, Ga. - Agents with the Federal Bureau of Investigations have arrested two Georgians in connection to the deadly riot at the U.S. Capitol on Jan. 6.

The U.S. Attorney for the Middle District of Georgia said that 57-year-old Americus resident William McCall Calhoun and 58-year-old Michael Shane Dauntry both face charges in connection with the riot.

According to an affidavit filed by the FBI, Calhoun had been under investigation since November of 2020, when they received a tip that he was making threats on social media encouraging others to "storm Washington, D.C."

In one message in the affidavit, Calhoun allegedly posted that "we are going to kill every last communist who stands in Trump’s way."

The day before the riot, the FBI says Calhoun posted on the social media platform Parler that he was "headed to D.C. to give the GOP some back bone." According to the FBI, Calhoun later posted video and photos from inside U.S. Capitol, while saying on Facebook that he was among "the first of us who got upstairs kicked in Nancy Pelosi’s office door and pushed down the 8 hall toward her inner sanctum."

Calhoun, who described himself as a criminal defense lawyer in Americus, has been charged with entering a restricted building or grounds, violent entry or disorderly conduct, and tampering with a witness, victim or informant. After appearing in Macon federal court on Friday, he remains in custody.

The investigation into Daughtry began a day after the storming of the Capitol when an officer from the Pelham Police Department provided the FBI with screenshots of Daughtry's social media posts where he allegedly said he was part of the event.

In a phone call recorded by Pelham police, an affidavit says Daughtry told officers that he was one of the first people to get past the barricades, saying that he went "up to the Capitol door" but stopped after being shot with rubber bullets.

ALSO: Capitol rioter threatened to shoot his kids if they told FBI about DC trip

"We was the first ones over the fence. Everybody followed us," Daughtry said on the call according to the FBI.

After a hearing in Macon Friday, officials charged Daughtry with the misdemeanor of entering a restricted building or grounds. He has been released on bond under the condition that his firearms be held by the U.S. Marshals and his restricted internet use.

More than 125 people have been arrested so far on charges related to the violent insurrection led by supporters of President Donald Trump at the Capitol, where a Capitol police officer and four others were killed.