Josh Shipplett's passion for watching pit stops as a kid turned into his job -- he's now a tire carrier for the No. 11 Toyota of Denny Hamlin.

ATLANTA - Josh Shipplett grew up going to dirt tracks on Saturday nights a mile and a half from his home in Winder, and when his dad brought him to his first race at Atlanta Motor Speedway in the early 2000s, he was hooked.

But not necessarily because of the Hot Wheels roaring around on the track before him.

"I remember watching like in the stands, and that’s what I’d wait for: I’d watch the pit crew change the tires, and I was like, man that’d be really cool to do, and for some odd reason that stuck," he recalled to FOX 5 Sports, laughing.

His passion for watching those pit stops turned into his job. Shipplett is now a tire carrier for the No. 11 Toyota of Denny Hamlin.

"Being on this 11 team, it’s nice to show up to the race track every week and know you have a pretty good shot at winning and winning in so many races we have the last couple years," he said. "We have a really good team."

While studying at Lanier Technical College, he got an opportunity to intern with the Richard Petty Driving Experience and moved to North Carolina. Since then, he's seemed to find success at every stop. The first NASCAR Cup Series race he ever did was a 2011 Daytona 500 victory with Trevor Bayne’s No. 21 Ford team. He’s won two Xfinity championships, and he’s won in Daytona two more times — in 2019 and 2020, with his current team.

But he’s never won a Cup Series race at his home track in Atlanta.

"I’d say (our chances this weekend) are pretty good," he said Monday. "I think we’re starting on the pole the way they do the qualifying stuff now, so we should be in the first pit stall and starting first, so hopefully I think we’ll be pretty solid. Our mile and a half program is pretty strong." 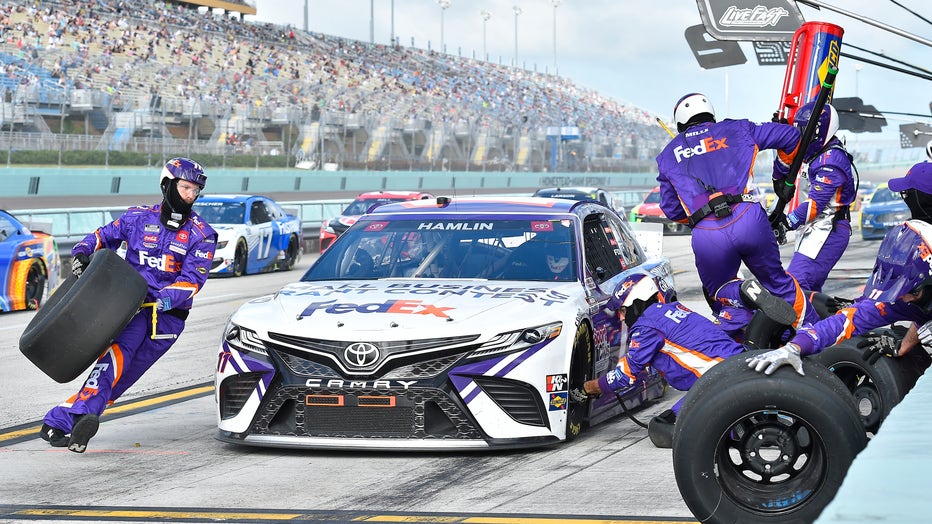 Winder native Joshua Shipplett (far left) is a tire carrier for the No. 11 Toyota of Denny Hamlin.

And this season, Shipplett has two Atlanta race weekends circled on his calendar.

"Now that we get to come back twice is really cool," he said. "One, just because it’s home but two, it’s a good race. As long as they don’t pave it any time soon, we’ll be OK."

Luckily for him, AMS officials have told FOX 5 there will be no re-paving before either of this year's NASCAR races, but there is a change since the last time NASCAR raced here: There will be fans in the stands.

But Shipplett says he definitely misses the fans in his corner on pit row.

"It’s still really weird in the pits because we’re so used to having fans down there and interacting with people, and we haven’t seen anybody down there," he said. "So we’re kind of halfway setting up stuff and stuff we don’t need. It’s really odd right now. Hopefully they’ll get back pretty soon to having people down there."

But he is looking forward to his family once again cheering him on from the sold-out, socially-distanced grandstand at AMS this weekend. He didn't grow up in a family of NASCAR fanatics, but they have a rooting interest now and always try to pick the seats nearest to the pit he will be working in.

"My brothers and sisters could probably care zero about NASCAR, but they watch it every week now," Shipplett said. "You can probably hear my mom screaming from Atlanta when we win a race."