It’s why the Snellville, Ga., native started the Game Changers Foundation to help current and former athletes through all stages in life — and it’s why the nonprofit has partnered this fall with Sports Turf Company to launch Athlete 2 Athlete, a free, 10-week video series to develop leadership and life skills for high school athletes.

"When you look at just the overall trajectory of a lot of athletes and where they ultimately end up in their careers, one of the most important areas is high school, those high school years. Maybe they’re a freshman and they don't have their grades right or something's going on at home or they get mixed up in the drugs and they end up — no matter how talented they are and how intelligent and how much potential they have — a lot of it is lost at that point," Curran told FOX 5 Sports. "Usually those crucial years of recruiting and all those different things are coming at you that you can either progress or you could fail depending on the support system that you have around you."

"When I think about the Game Changers Foundation and what our ultimate goal is, it really is to try to create like a loop of influence," Curran said. "And what I mean by that is, now you have former athletes going on being able to achieve great things in their careers, and you also have court corporate people as well who were once young and have been able to achieve great things who are now coming back and pouring into that next generation and my whole goal is to have them become like those who are impacting them, who are mentoring them, and then they come back to do the same thing from those are following them." 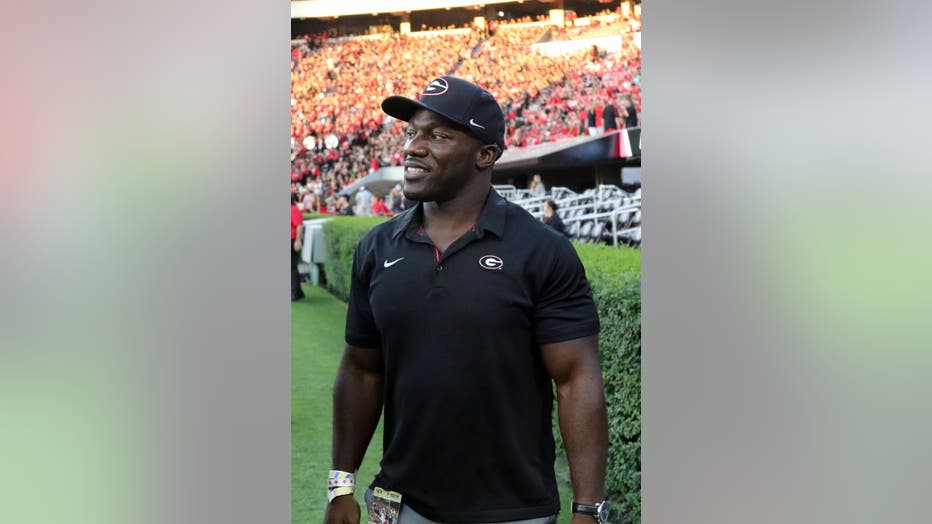 ATHENS, GA - SEPTEMBER 21: Former Georgia and NFL player Rennie Curran at the game between the Georgia Bulldogs and the Notre Dame Fighting Irish on September 21, 2019 at Sanford Stadium in Athens, Georgia. (Photo by Michael Wade/Icon Sportswire via

The foundation had planned to do these sessions in person, but the COVID-19 pandemic of course pushed them into the virtual realm.

"We definitely had to pivot towards this virtual style of delivery. Initially we were planning on being in schools across the state of Georgia and really getting former athletes who maybe attended that school or from around the area to join myself and the other board members and the other athletes and whatnot and really just impact as many athletes as possible," Curran said. "And then from there hopefully we would get — whether it’s through the coach or whether it’s through the athlete — get opportunities to mentor them more one-on-one."

Each show will run about an hour long, and high school superintendents, athletic directors, coaches, athletes and their parents throughout Georgia are invited to sign up on Eventbrite.com.