ATLANTA - It is a classic offense vs. defense match-up in the Southeastern Conference championship game between the LSU Tigers and the Georgia Bulldogs.

Here are the latest headlines from the game:

Jake Fromm has thrown 5 INTs this season. Only 2 different players have picked him off

UGA has never been held without a touchdown in a game started by Jake Fromm. Last game the Bulldogs were held without an offensive touchdown was a win over Auburn in 2016 (had a defensive TD that game).

Rodrigo Blankenship has missed 3 of his last 4 field goal attempts in this stadium -- two today, missed one in the third quarter of last year's SEC Championship Game.

UGA holds LSU to a field goal as the Tigers chew up quite a bit of time in the third quarter.

Positive injury development for #UGA -- WR Kearis Jackson is walking around the sideline with his helmet on. Hurt his ankle in the first half and went back to the locker room.

They're bringing out the cart for Tyrique Stevenson. Injuries piling up at every turn for the Dawgs.

Walter Grant down for UGA after the kickoff, when he was leveled by a LSU player. He’s up on his feet now, walking to the sideline.

Positive injury development for UGA -- WR Kearis Jackson is walking around the sideline with his helmet on. Hurt his ankle in the first half and went back to the locker room.

Jake Fromm back in for the Dawgs. Just over two minutes remain in the first half.

Fromm just emerged from the medical tent, holding his helmet. Giving high fives to everyone (like actually every person) on the bench. He's throwing the ball on the sideline with Stetson Bennett now.

Jake Fromm being attended to on the field by trainers. This place just went silent. He’s walking off to the sideline on his own power with trainers now.

As Jake Fromm is being attended to on the field, ANOTHER UGA WR hurt -- Kearis Jackson taken back to locker room. UGA WR Kearis Jackson also getting attention from trainer Ron Courson. When it rains, it pours

UGA looks to at least be being careful with D'Andre Swift. He has just 1 carry so far -- Swift averaged over 100 yards rushing per game this season and accounted for 42% of the Georgia's rushing attempts. 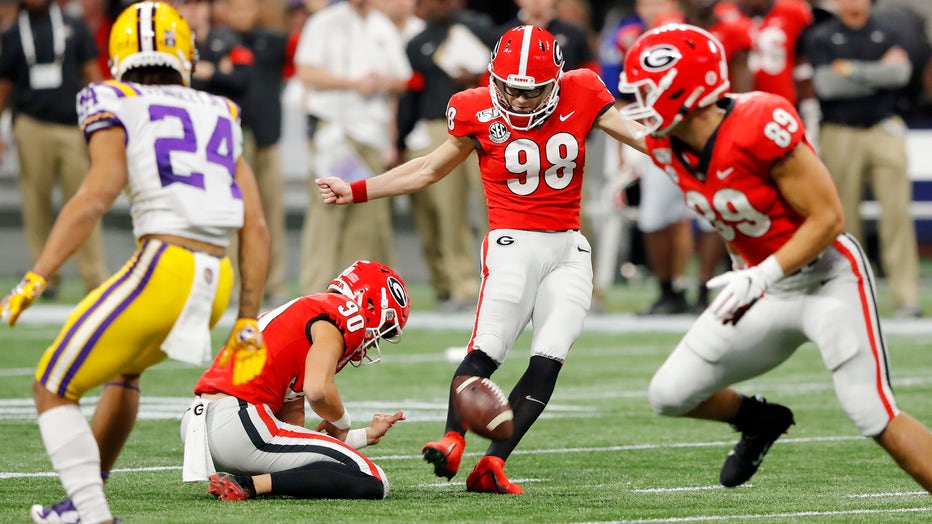 Rodrigo Blankenship #98 of the Georgia Bulldogs attempts a field goal in the first half against the LSU Tigers during the SEC Championship game at Mercedes-Benz Stadium on December 07, 2019 in Atlanta, Georgia. ((Photo by Kevin C. Cox/Getty Images))

Dawgs are leading time of possession 8 mins to 7 mins after 1 Q.

UGA announces Dominick Blaylock has a knee injury and is out for the remainder of the game.

Both teams have had three possessions... LSU has 137 total yards, UGA has 35.

Joe Burrow goes seven yards to Terrance Marshall Jr. for LSU’s second score of the first quarter. Tigers up 14-0 with 12 seconds before the second quarter

Rodrigo Blankenship is wide left from 52 yards out. He was 5/6 in MBS before that kick.

LB Quay Walker was taken to the team's locker room. 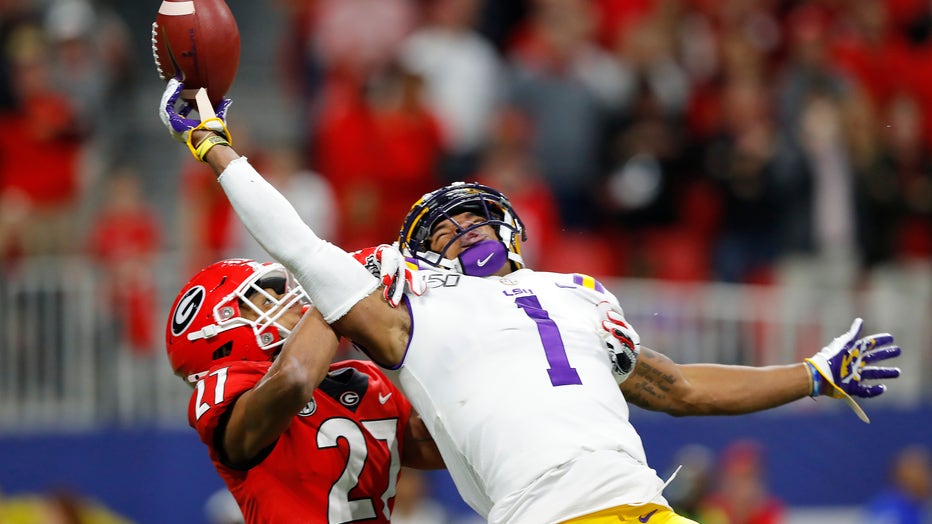 Ja'Marr Chase #1 of the LSU Tigers is unable to catch a pass as he is defended by Eric Stokes #27 of the Georgia Bulldogs in the first half during the SEC Championship game at Mercedes-Benz Stadium on December 07, 2019 in Atlanta, Georgia. ((Photo by Kevin C. Cox/Getty Images) / Getty Images)

Per UGA radio, this is the Bulldog's first time trailing in a game since the loss to South Carolina.

UGA offense almost gifted with an LSU fumble on their own 14 by Clyde Edwards-Helaire, but it's overturned (down on his elbow). 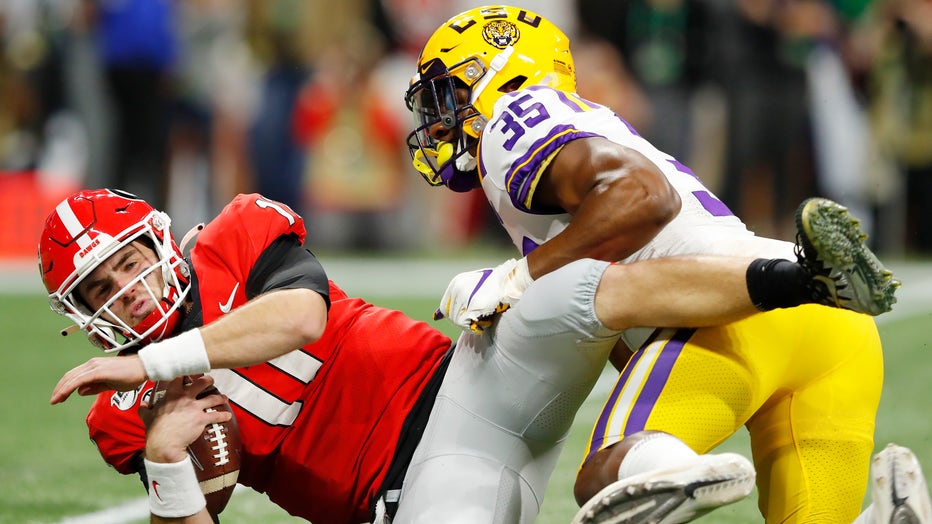 Damone Clark #35 of the LSU Tigers sacks Jake Fromm #11 of the Georgia Bulldogs in the first quarter during the SEC Championship game at Mercedes-Benz Stadium on December 07, 2019 in Atlanta, Georgia. ((Photo by Kevin C. Cox/Getty Images) / Getty Images)

Through those first two series, Jake Fromm is 2/7 for 11 yards. UGA's offense has had two first downs and is 0/2 on third down.

Auburn defensive back sees some similarities between UGA on that first drive and what Auburn did against LSU. (3 DL, 1 LB, 7 DBs).

This was Burrow's 45th touchdown pass on the year, and that's an SEC record for most in a season.

LSU with the early 6-0 lead before its extra point attempt. The touchdown is under review now. Ruling on the field stands. Touchdown, Tigers.

On the first drive for UGA, two deep incompletions down the middle and one deep pass a step out of bounds down the sideline. Three pretty good throws from Fromm, who's missing his top two WRs -- Cager hurt, Pickens suspended first half.

After the coin flip, Georgia opts to receive.

The LSU-Georgia showdown sets up a classic offense vs. defense match-up in the Southeastern Conference championship game.

The Tigers are perfectly comfortable in an offensive shootout. Georgia would prefer a defensive quagmire.

Top-ranked LSU is the second-highest scoring football team in the land, putting up nearly 49 points a game.

Fourth-ranked Georgia has posted three shutouts while surrendering an average of less than 11 points.

The winner of Saturday's game will surely earn a spot in the College Football Playoff. Many pundits believe LSU has already done enough to claim a spot in the four-team field -- even with a loss to the Bulldogs.