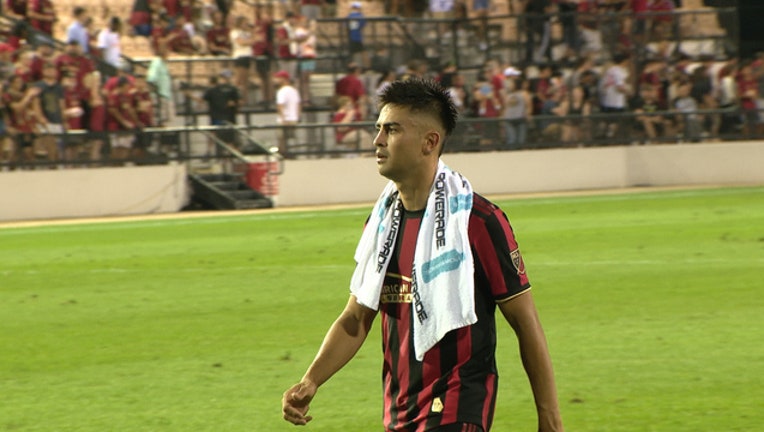 This all goes back to a post-match press conference two weeks ago, after Atlanta's win over Montreal. De Boer said Martínez had become "dangerous" to the team with his decision-making, and that's why the midfielder was subbed off.

"Really he should've said it to me in private," said Martínez "It is something we can talk about."

Thursday afternoon, Martínez did an interview with a radio station in Argentina, expressing those frustrations, and also criticizing some of de Boer's tactical decisions. His biggest issue, as he reiterated Friday, was de Boer criticizing him in the media before addressing it privately. The Five Stripes coach, however, disputes that.

"One thing to be very clear, if I say something like that, then I already said it also to him first," said de Boer. "It's not like I'm saying that behind his back."

Martínez said, ultimately, it's in the past. He met with Atlanta United technical director Carlos Bocanegra on Friday morning, and says there are no lingering issues.

"We have a good relationship, but it's what he said that bothered me," said Martínez "That was it. He's the coach, as the coach, everyone has to understand his style of play and what he wants, we have to follow his orders."

De Boer agrees, and says he is critical of every player. He also expects a lot of Martínez, who came to Atlanta with a record-setting transfer fee from River Plate. The coach said multiple times that Martínez' performance in Wednesday night's US Open Cup win over St. Louis FC is a step in the right direction.

"I think we are mature enough to deal with that, both sides," said de Boer. "I have no problem with Pity, he has no problem with me, and we have only one goal: to let him play as good as possible. What I saw on Wednesday is the response everyone wants to see."

Martínez also shot down rumors that he or his agent have asked the team for a loan to another club.

Fans and media have not gotten to hear Martínez' side of things often. He has done few interviews since joining Atlanta United, and has declined some post-match interview requests, including after Wednesday night's victory over St. Louis. Martínez said on Friday that, while he does prefer some time alone after matches, he plans to be more available to media in the future.