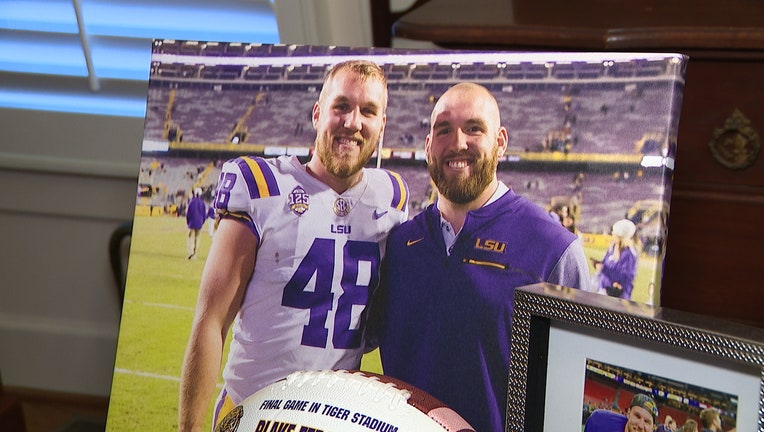 The brothers are Buford High School alums, with Blake serving as long snapper at LSU and Reid handling the same job for the Buffalo Bills

SMYRNA - Anyone that has traveled to an important event -- on short notice -- that you really can't miss -- can probably relate. Maybe, however, not to this level.

"Some days I look back and think, 'how in the world did we do it?'" said Smyrna's Tracy Ferguson.

Tracy and her husband Kevin are the proud parents of LSU long snapper Blake Ferguson, and are looking forward to watching him play in Monday night's national championship game against Clemson. Blake knows his folks would never miss a chance to see their son play.

"Every single game," said Blake, of how often his parents are in the stands.

It gets a little more complicated, however, because Blake is not Kevin and Tracy's only son playing football at one of the highest levels out there.

Blake is the LSU long snapper, while quite a few miles to the northeast, Reid Ferguson is the long snapper for the Buffalo Bills. Before that, Reid handled the special teams snaps at LSU, the job his younger brother would later win. Both went to Buford High School. Kevin and Tracy now live in Smyrna.

That thing about being in the stands whenever their sons are playing? The parents meant it.

"We've never missed a game for either of the boys all the way back to when they started, 5th grade or whenever it was," said Kevin Ferguson. "Probably from high school forward, probably close to 300 games."

So that's meant, with one son in college and one in the NFL, weekends with a game on Saturday in Baton Rouge or somewhere else in the SEC, with a Sunday spent with the Bills. Recently, the schedule has added some high stakes games: Blake played in the SEC Championship and college football semifinals, while Reid played in a playoff game against the Houston Texans.

"You can tell, my voice is going," said Tracy, dealing with a slightly hoarse voice after a few weekends in a row of cheering. "That's one of the byproducts of being on the road a lot. It's just been a whirlwind for us. We like to see them succeed. The game coming up on Monday is the cherry on top."

The big question on the horizon, however, is what happens if both of their sons are in the NFL. Blake is hoping to earn a spot on an NFL roster after he concludes his college career on Monday.

"It's a good problem to have, I guess," said Blake.

The Ferguson parents are thankful that flexible jobs have allowed them to travel, and no weather delay has caused them to miss a game (though sleep is a different story).

"Some days I look back and think, 'how in the world did we do it?'" said Tracy. "When we hear from the boys it meant so much to them ... it really makes all the crazy travel and coordination really worth it."