ATLANTA - Not many NFL players can say they played their first snap of football as a high school senior.

Auzoyah Alufohai actually grew up playing basketball and watching Kobe Bryant as he grew up in Nigeria, Malaysia and Qatar. He said he barely knew what football was, other than it was a sport his cousin in Houston played.

The son of a Nigerian oil engineer, Alufohai was born in Houston and still has family there, so he considers that home town. But his dad’s job moved them back to their home country, to Kuala Lumpur, and then Qatar, before Alufohai came to Georgia to play basketball at Darlington.

Alpharetta product Auzoyah Alufohai has taken the road less travelled to sign with the Houston Texans after playing football at Kennesaw State and West Georgia.

But at Darlington, he was placed in the wrong grade.

He transferred to Alpharetta, where it took him until his senior year to recover academically and become eligible to play sports.

By then, Alpharetta head coach Jason Dukes convinced him to play football.

His now 6-foot-4, 320-pound frame attracted an offer from Kennesaw State, which was just starting out as he came into the program.

"It was like a perfect situation for me because we were a first-year program," Alufohai said. "Our first year we didn’t have a season, so it kind of gave me time to grow since I was still new to the game." 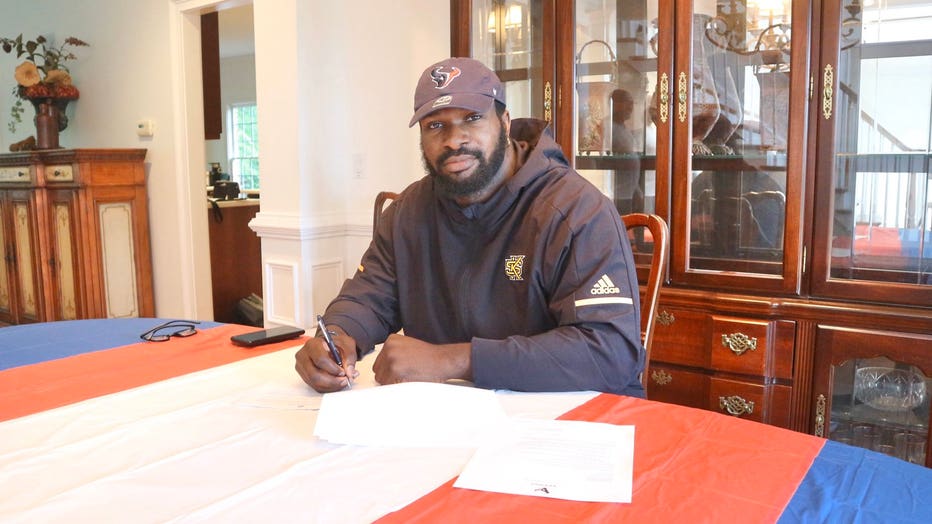 Alufohai came into KSU with the goal of shedding weight. He still remembers his first conditioning session.

"Man I went home and called my mom, 'Mom I don’t think I can do this,'" he said. "She was like, stick to it. It’s hard, but nothing good in life comes easy."

He played with the Owls until 2017, when he sustained an injury going into his redshirt senior year. The NCAA denied him a medical redshirt year, so he transferred to Division II West Georgia to finish out his collegaite career. He said that experience helped him learn to get accustomed to different coaching styles and helped him motivate and push himself more.

His 31 tackles, 4 tackles for loss, 3 forced fumbles and 2 sacks last season were enough for an East-West Shrine Game nod in January. There, he said, he was excited to show NFL scouts that he belonged among his SEC and Division I counterparts.

"The Shrine Game helped me a whole lot because the huge question mark for a lot of small-school guys is the level of competition: Is he good because he’s going up against 'lower-level competition?'" he said. "So the Shrine Game definitely put my name out there in saying, 'Hey he’s not just a D2 guy.'"

The East-West Shrine Game kept him on the radar of about 20 NFL teams, Alufohai said.

But nothing was sweeter than the prospect of playing for his hometown Houston Texans, a city where he still has about 20 family members "that I know of," he said.

The Texans kick off their virtual offseason program next week, but Alufohai can't wait to meet one of his new teammates and one of his football idols: JJ Watt.

"It’s definitely going to be crazy," Alufohai said. "Might be starstruck a little bit, but I’m gonna keep cool and try as much as possible to learn from him and do whatever he does and shadow him and really be that annoying little brother."