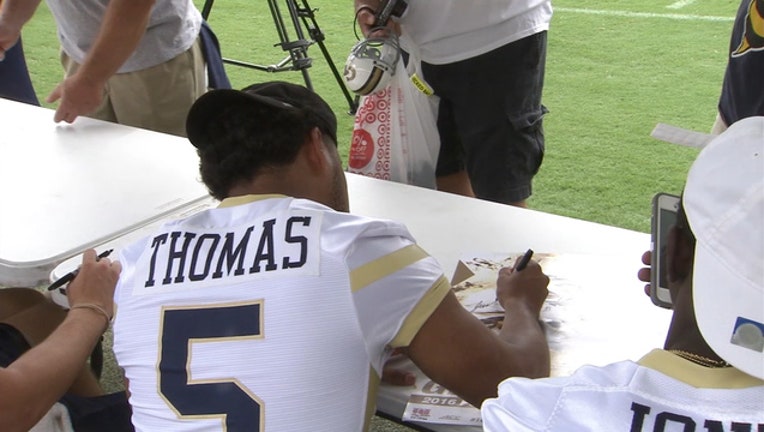 The year before was the exact opposite. Thomas, a sophomore, was a full-time starter for the first time, and the Yellow Jackets' spread option attack was flush with veterans at B-back, A-back and receiver.

Thomas was a driving force in the team's success two years ago, but he grew despondent as the bottom fell out last season.

"I think he got frustrated real easily," coach Paul Johnson said Saturday at the Jackets' media day. "I think any time you've played at a high level like he had the year before — and he had a plethora of weapons around him. I'm not sure people realize that some of those kids were pretty good.

"He could kind of sit back and he didn't really have to be a leader."

Now three days into the start of fall camp, Thomas is focused on what he can control. Regardless of the personnel or situations around him, Thomas is concentrating hardest on ball security.

"I made a lot of, I guess, boneheaded plays, throwing picks that I don't (normally) do, even fumbling the ball," Thomas said. "I need to make sure I'm being more careful with the ball."

Johnson saw firsthand how Thomas' frustration affected everyone around him. As the Jackets lost nine of their last 10 games, Thomas was hard to console.

"It's easy to go back and sit on the bench and go, 'Man, what am I playing with?' " Johnson said. "At quarterback you can't do that and especially where you're called on as a leader. I think he grew up a lot and learned a lot. Then he got dinged up and wasn't healthy. People don't realize all the time that he played a good part of last year not healthy, not 100 percent."

The year before Thomas had DeAndre Smelter, Synjyn Days, Zach Laskey and Darren Waller to make plays. He had an experienced offensive line led by Shaquille Mason.

"They knew where to go and what to do and how to adjust," Johnson said. "Then all of a sudden, after about three games (last year), you're surrounded at every position with guys who've never played. They're trying to feel their way through it."

Thomas has benefited this offseason from working alongside Marcus Marshall, Clinton Lynch, Dedrick Mills, Marcus Allen, Qua Searcy and Ricky Jeune. They all went through growing pains, too.

Thomas has five offensive linemen Freddie Burden, Eason Fromayan, Will Bryan, Shamire Devine and Trey Klock to provide the space and protection he needs to succeed.

"Getting all those reps in the spring, summer and now we're into camp, it's the same guys," Thomas said. "?Not somebody new you haven't played with. You get to know the person, how they play the game and what they can and can't do. Just having that comfort level is a lot better."