ATLANTA - The first time Hunter Atkinson’s high school coach realized he had a special player on his hands was when the now-Falcon overslept for a meeting.

It was how he handled it that impressed Tony Lotti, then the head coach at West Hall.

It doesn’t get more home-grown than growing up a few minutes away from the Falcons’ facility in Flowery Branch&nbsp;— but there’s even more to the incredible story of new Falcons offensive tackle Hunter Atkinson.

The team rule was to sit a quarter if you missed a meeting. And just because Atkinson was a three-star tight end at West Hall, he wasn’t above that rule.

During that week’s game, the opposing chain holder couldn’t believe the Spartans were sitting their star. 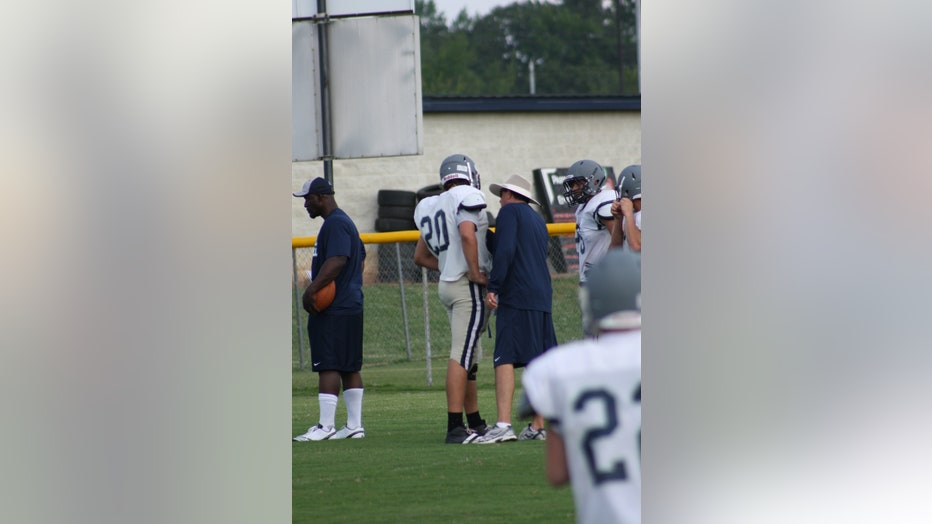 Tony Lotti said this photo was captured at their first practice together at West Hall High School.

Atkinson brings a whole new meaning to the term "home-grown" after signing with the Falcons as a college free agent this week: He grew up and still lives just minutes from the team's facility in Flowery Branch.

The offensive tackle recalled on Tuesday his memories of sitting on the hill at Falcons training camp as a kid and getting jerseys signed by Alge Crumpler and Michael Vick — which he still has.

"I mean, I dreamed of playing there," he told FOX 5 Sports on Tuesday. "It’s so close to home. I’m not going to have to relocate my family. I grew up here and watched them practice there for years and years and just prayed that one day I would be able to practice out there with them. Everything just came together perfectly the way I would picture it. I wouldn’t picture it any other way."

It doesn’t get more home-grown than growing up a few minutes away from the Falcons’ facility in Flowery Branch. New Falcons offensive tackle Hunter Atkinson went to West Hall, and FOX 5 Sports caught up with his high school coach to learn more about him.

When he got to West Hall High School in 2012, Lotti was struck by Atkinson's athleticism as he watched the then-junior pull rebounds down in basketball games. However, Lotti had to convince Atkinson to keep playing football instead of focusing on basketball. He switched Atkinson from outside linebacker to tight end to give him a new perspective on the game.

"I think it’s a bad decision to concentrate on one sport in high school, and I told him, give this a chance and see how it goes and we just kind of started building our relationship from there," Lotti said. "I’m looking at a kid that’s six-foot-five, OK? And there wasn’t a whole lot of those walking around in the building."

From there, Atkinson became an all-state, three-star tight end who joined the Georgia Bulldogs under Mark Richt in 2014. Three weeks later, just as football practices were getting underway, he had to step away from the program when his grandmother suffered from a brain aneurysm.

"She ended up passing away," he said. "And just before she passed away, I made a promise that I would go back and play football."

During a difficult year away from the game, Atkinson paid the bills as a lineworker on power poles for Pike Electric. During his work breaks, he’d call coaches who had recruited him. Georgia State, the first program to offer him back in high school, said the Panthers had a walk-on spot available. 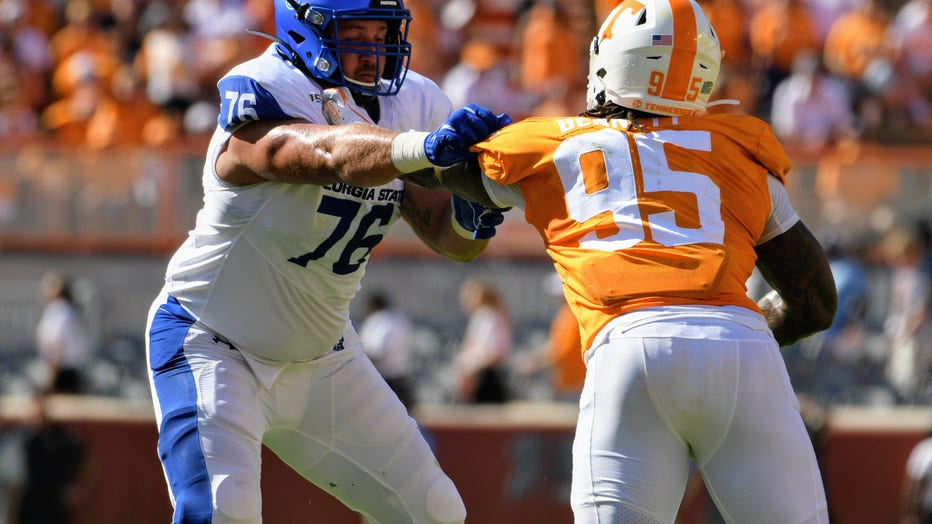 After starting out as a scout team tight end, Atkinson had to make another position change: to left tackle. He said the transition was difficult, putting on 50 pounds and learning the ins and outs of offensive line play, never taking a snap at tackle previously.

But it turned out to be the right move for the four-year starter and two-time All-Sun Belt Conference lineman, as the Falcons signed him as an undrafted free agent last week.

"Everyone sets dreams or goals they think they may never get to, but it’s just a goal to work towards," Atkinson said. "And to be able to say I’m where I dreamed when I was six years old that I would be, it’s just crazy, and I’ve got to stay there."

His first call after he got the news from his agent was to his Falcons-fanatic mom, then to his high school coach who kept him in the game all those years ago.

"My mind went to all those experiences of the road that got him there and the hard work that he put in, the fact that he continued to not give up on his dream," Lotti said. "And the end result is he’s going to roll a mile up the street and he’s going to put on a NFL uniform." 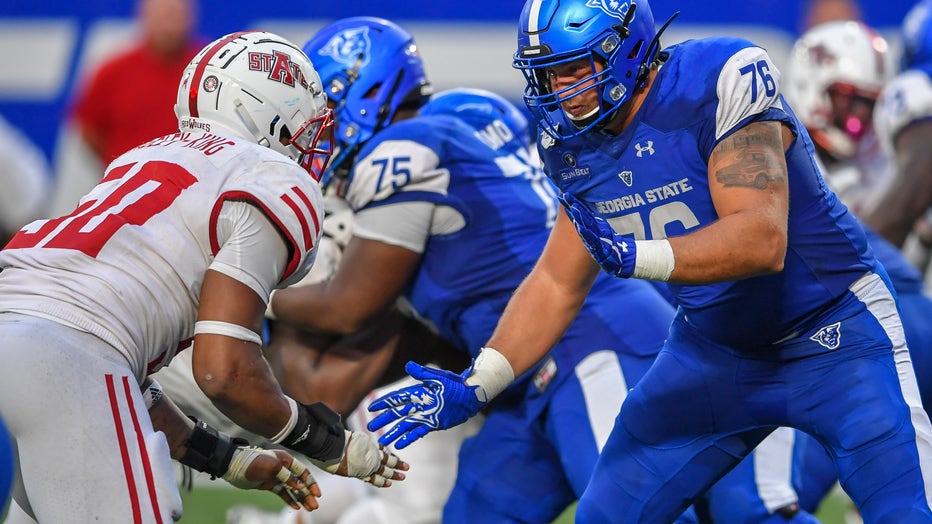 While transitioning to the NFL is a different process this offseason because of the coronavirus pandemic, Atkinson said the Falcons have already incorporated their rookies into workout plans, position meetings and group texts to get to know one another less than a week in.

"The older guys (on the O-line) are really taking us in, and they included us in a message introducing themselves right away with Alex Mack and Jake Matthews," Atkinson said. "It was really nice, and I was honored for them to be texting me." 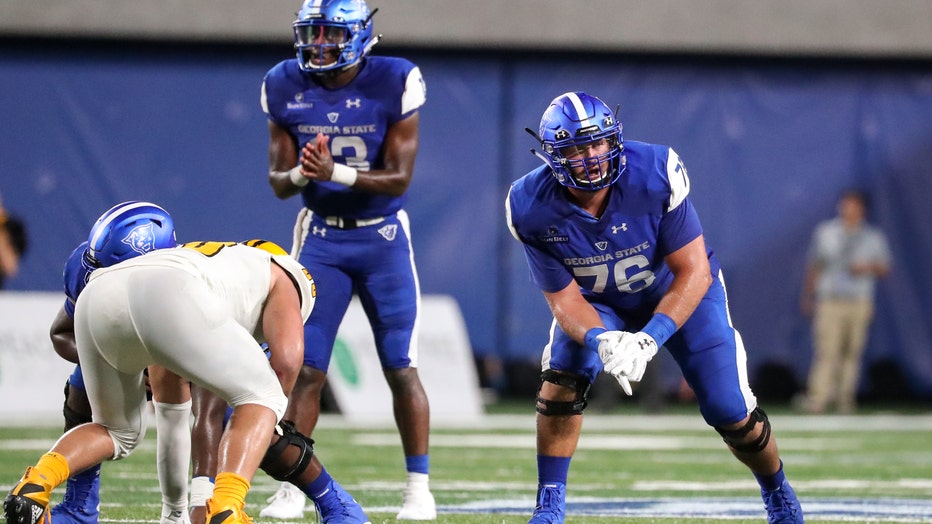 Next up, Atkinson said he can't wait to pick the brains of guys he has looked up to as a lifelong Falcons fan, like Matthews and Mack — and Matt Ryan and Julio Jones.

"I just sit there and I'm like, 'Wow.' It's so crazy," he said. "They just picked up Todd Gurley too, and he was a senior when I was going into Georgia so I got to see him a few times when we'd practice, seven-on-seven and stuff. It's crazy to sit there and think about Matt Ryan and Julio Jones -- they're icons, everybody looks up to them, and I'm going to be on the same field with them, repping the same city and the same team. It's crazy."