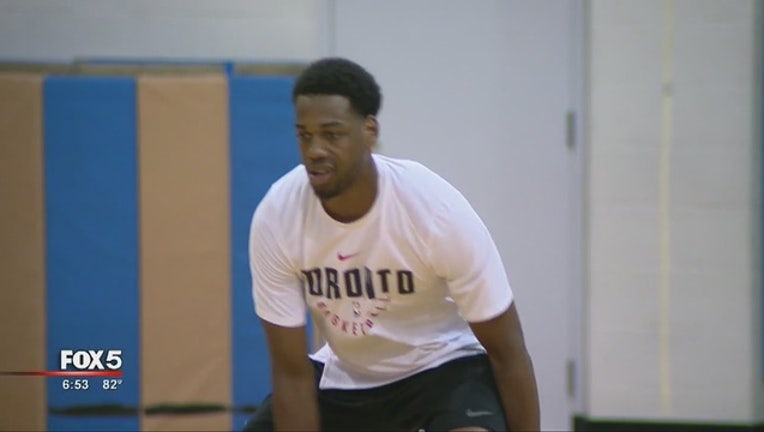 ATLANTA (FOX 5 Atlanta) - A guy like Jordan Loyd doesn’t have much time to celebrate the NBA Championship that he just won as part of the Toronto Raptors organization. However, there aren’t many guys who get a front row seat to history, either.

You may have seen Kawhi Leonard’s game-winning three-pointer against the Sixers to send Toronto to the Eastern Conference Finals, and if you did, chances are you saw Jordan Loyd too. In the infamous picture of Leonard squatted down watching the ball bounce around on the rim Loyd is right next to him, wide-eyed and ready to celebrate.

“I was just so locked in onto the shot in the moment,” Loyd said. “The picture was kind of priceless. It was just instincts for me. You know, I was so into the game. That’s all I can do. I’m in a suit, so l just have to cheer my guys on and encourage them.”

Even though Loyd was not on the court during Leonard’s shot seen around the world, he gained his fair share of followers by becoming the random guy in the suit.

“I thank Kawhi all the time for getting me some engagement and some popularity,” Loyd saLoyd has never craved the spotlight. Not when he played on Milton’s 2010 state championship team, or when he toiled as an NBA D-League player, hoping to earn his way onto a roster. He has long understood that nothing is ever given.

His numbers were good enough to get his first NBA regular season call up last November. He scored 29 points in 12 games with the Raptors, and although he wasn’t on the postseason roster, Loyd made a major contribution to the team--playing the role of Steph Curry on the scout team.

“I think I did okay,” Loyd said with a smile. “It just shows you the level you need to be at if you want to play in the NBA Finals.”

When Curry’s final shot in game six didn’t fall, the corks popped for the first time in Raptors franchise history.

“The champagne showers, you only see that on TV, and to be a part of it you’re looking around like wow,” Loyd said. “I’ve achieved something a lot of people will never be able to say they did. I’ll cherish that forever.”

Loyd never thought he would be an NBA Champion, and even more unlikely was the idea of him becoming a T-shirt designer.

He reached out to a Raptors staff member, and the rest is history. Loyd wore the shirt for the whole world to see and quickly became the social media sensation of the championship parade.

“I’ve got people coming up to me saying, ‘You’re that random guy in a suit,’” Loyd said. “After a while you’re like, I don’t always want to be known for that.”

Loyd may or may not always be known for that, but one thing is for sure, he is working to become a household NBA name.

“My goal is to be a rotation player for the Raptors,” Loyd said. “That will remain my goal until I find a new one.”

Loyd will take on the NBA summer league in a week-and-a-half with that goal on his mind.