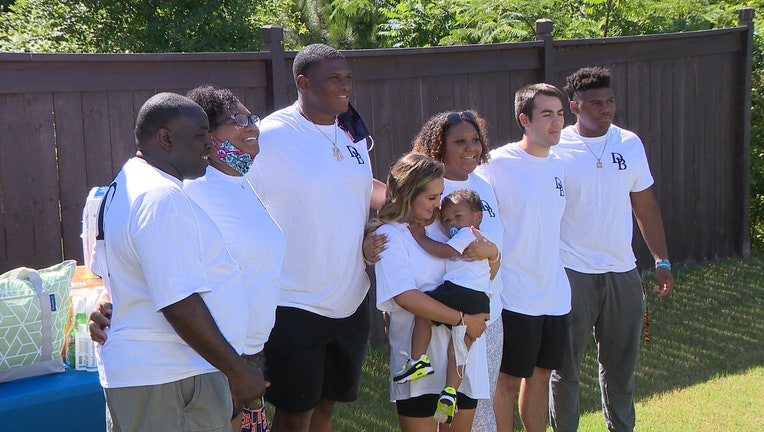 BUFORD - A few years back, Derrick Brown was a High 5 Sports star on Friday nights. The Lanier High School graduate has always been soft-spoken, letting his play and his actions do the talking. These days, those actions have a lot to say.

"Having somebody give us a gift like this ... it's so amazing," said foster parent Theodora Sanders "So amazing."

On Saturday, Brown gave foster families in Buford $1,000 gift cards to Sam's Club, as well as memberships to the store. The rookie defensive lineman with the Carolina Panthers was picked 7th overall in the 2020 NFL Draft.

"God's blessed me with a lot, especially during trying times like this," said Brown. "I wanted to be able to do something and help the community. Being able to help in my own community, there's no words for that."

In addition to making a different, Brown has been hard at work at his new job: getting ready for his first NFL season. No one could've expected that would entail quite so much time in front of a computer screen. The former Auburn University star says the virtual meetings with his Panthers coaches and teammates are going well, and he's fine working out on his own. He is also not worried about the lofty expectations that come with being a top 10 draft pick.

"Workouts every single day, getting all those things done, Holding myself accountable. Every day, when you're done with meetings, being able to sit down, go over the playbook, do those extra things, so when training camp does get ready to happen, I'm ready."

After standout careers in high school and college, Brown is hoping for more success at the next level of football. Thanks to his work this past weekend, perhaps some foster kids near him hometown will also be a little more set up for success.

"I drove the school bus [Brown] used to ride, I drove for Lanier High School, I drove for Lanier Middle School," said foster parent LaKisha Canary. "To see him grow, comeback and give back to the kids. It's a huge thing. I'm very proud of him. I'm excited for what he's doing, but I'm more excited for the kids to see that somebody, other than the homes that they're in, cares about them."