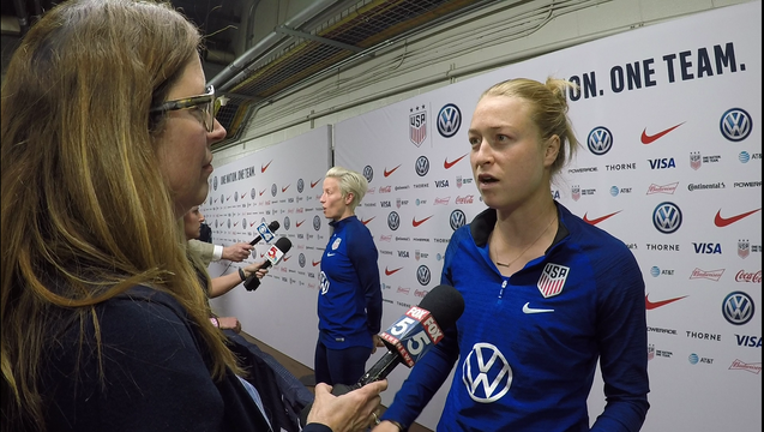 MARIETTA, Ga. (FOX 5 Atlanta) - Youth sports has so many benefits to children, if the parents don't ruin it for them. I talked to the coach who started with one of the World Cup players back in the early days. What does he say? Get out of the way and let the kids love the sport on their own.

Listen, as we've talked about already, three of the 23 US women on America's World Cup team are from Georgia. That takes natural skill and drive, but also a lot of hard work. And parents paying the tab and toting them around when they're younger.

But how much is too much? About a week ago, video of a little league baseball game out of Colorado revealed parents brawling over a call. A call, I might add, made by a 13-year-old umpire. Just sad. And ridiculous. But this is not a rare sight.

Many of you have kid athletes. Or, maybe you have a great chess player. Whatever it is, you need to strike the balance of supporting them yet staying out of their way. It's tough. I get it.

I talked with Coach Ward Swain of NASA Tophat. It's a Marietta club where he helped to coach US defender Emily Sonnett. It's one of the best clubs in the country. He says, you do this after a good game or a bad. Just say, 'Hey, I enjoyed watching you play. Did you have fun? What do you want for lunch?' And then zip it.

"The thing is the parents who really understand it realizes it's their daughter's adventure, not theirs. They have to be along for the ride. If parents are trying to drive the whole thing the whole time, the kid is probably not going to have fun because they'll feel like they're not playing for the joy of playing or the joy of hanging out with their friends, but because they have to make their parents proud," said this junior academy coach.

To coach an Emily Sonnett is rare. He said, in fact, her whole team as a kid was amazing. It could've been any of them, but a lot happens between nine and 21, right?

Coach Swain said this is how he judges a successful young athlete.

"Listen, if I coach a cool kid and she quits at 13 and I run into her at the grocery store and she's still a great, cool kid, that's a success story."

On the field, he teaches them to play soccer. Off the field are the real lessons for many: analyzing and rebounding from mistakes, managing failure, and learning how to give your best effort no matter the outcome.