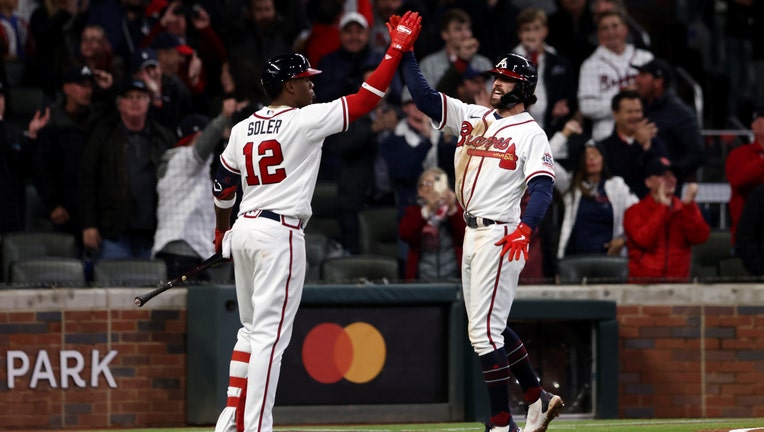 ATLANTA, GA - OCTOBER 30: Dansby Swanson #7 of the Atlanta Braves is greeted by teammate Jorge Soler #12 after hitting a solo home run in the seventh inning during Game 4 of the 2021 World Series between the Houston Astros and the Atlanta Braves at T

ATLANTA - The Atlanta Braves continued their dominance at home during the playoffs and took a commanding 3-1 lead in the World Series after defeating the Astros Saturday night.

Dansby Swanson and pinch-hitter Jorge Soler connected for back-to-back solo home runs in the bottom of the seventh inning that gave the Atlanta Braves a 3-2 lead over the Houston Astros.

The win sets up Game 5 at home Sunday night as the World Series clincher.

Kyle Wright came up big for Atlanta, pitching 4 2/3 innings of relief that included one run and five hits with three walks and three strikeouts.

Wright, the No. 5 overall draft pick out of Vanderbilt in 2017, entered in a tough situation as Braves opener Dylan Lee had loaded the bases in the first and lasted just one-third of an inning.

LIVE UPDATES FROM THE GAME

Enter Wright, who retired Correa on an RBI groundout and struck out Kyle Tucker to strand runners on second and third. Critically, he lasted long enough to save the Braves relievers from getting overworked with another bullpen effort looming for Game 5 on Sunday. 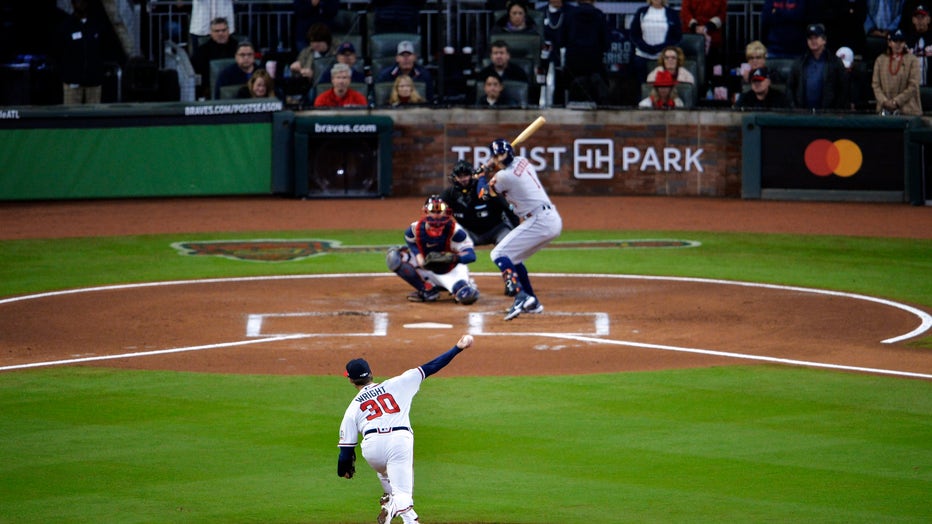 ATLANTA, GA - OCTOBER 30: Kyle Wright #30 of the Atlanta Braves pitches in the first inning during Game 4 of the 2021 World Series between the Houston Astros and the Atlanta Braves at Truist Park on Saturday, October 30, 2021 in Atlanta, Georgia. (Ph

Wright spent almost the entire season at Triple-A Gwinnett, going 10-5 with a 3.02 ERA in 24 starts. His two starts with Atlanta didn’t go well, as the right-hander went 0-1 with a 9.95 ERA. He began the night with a 2-8 record and a 6.56 ERA in 14 starts and seven relief appearances in his career with Atlanta.

Swanson broke out of his postseason slump at the perfect time, driving an 0-2 fastball from reliever Cristian Javier to right for an opposite-field homer that barely cleared the high brick wall at Truist Park.

The fired-up shortstop raised his right index finger in the air as he rounded first and pumped his fist as he circled the bases.

Soler, batting for reliever Tyler Matzek, then lined a 2-1 slider from Javier just over the left-field fence to put Atlanta ahead. Astros left fielder Yordan Alvarez banged hard into the fence chasing the ball and was shaken up, but stayed in the game.

It was his second homer of the Series after becoming the first player to open a Fall Classic with a home run in Game 1.

Soler began the game on the bench, with left-handed-hitting Joc Pederson starting in right field instead against right-hander Zack Greinke.

When he entered, Javier had not allowed an earned run in nine innings this postseason.

It was the first time in franchise history the Braves hit back-to-back homers in the World Series. 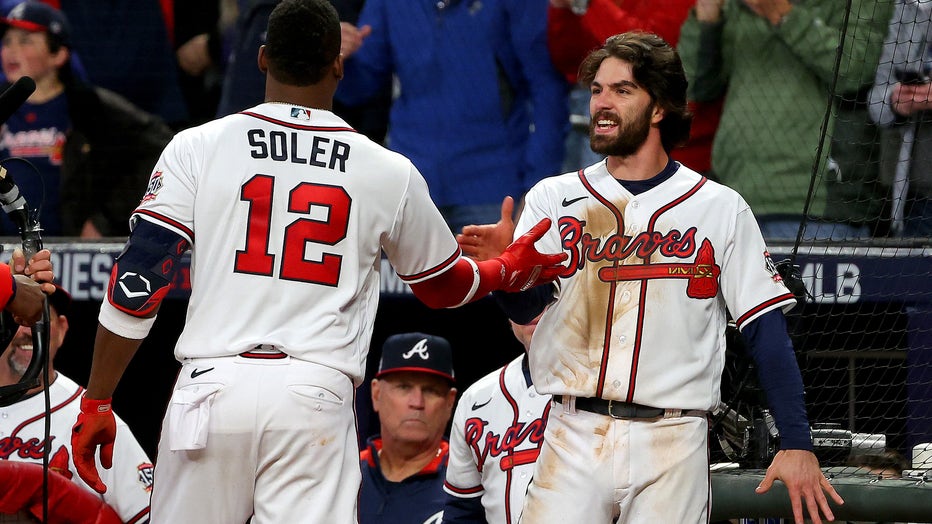 ATLANTA, GEORGIA - OCTOBER 30: Jorge Soler #12 of the Atlanta Braves is congratulated by Dansby Swanson #7 after they hit back-to-back solo home runs against the Houston Astros during the seventh inning in Game Four of the World Series at Truist Park

Matzek tossed a scoreless top of the seventh for Atlanta.

Earlier in the night, red-hot Eddie Rosario put Atlanta on the board in Game 4, cutting Houston’s lead to 2-1 in the sixth inning.

The NLCS MVP doubled with one out, improving to 23 for 58 this postseason. His 23 hits are tied for second-most by a Braves player in one postseason, trailing only Marquis Grissom’s 25 hits in 1995.

Rosario’s double came against left-hander Brooks Raley, who took over to start the sixth. Raley walked Freddie Freeman, then was replaced by Phil Maton, who struck out Ozzie Albies before Rosario scored on Austin Riley’s single.

The win in Game Four came after the Braves kept the Houston Astro hitless through seven innings of Game Three of the World Series on Friday night. The Braves beats the Astros 2-1 in their first World Series game at home at Truist Park.

Game 1 loser Framber Valdez gets his second start of the Series for the Astros. The left-hander lasted only two innings last Tuesday, giving up eight hits, five runs and two homers in a 6-2 setback.

The Braves will counter with their second consecutive bullpen game. No word on who will be the opener in a start that would’ve gone to Morton if not for a broken leg that ended his season in Game 1.