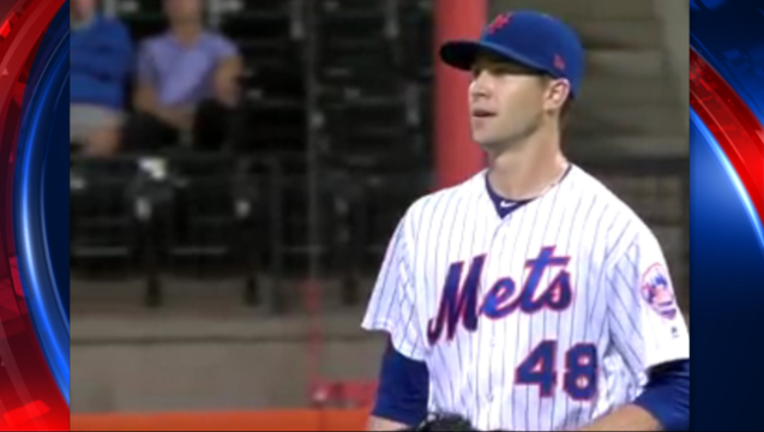 NEW YORK (AP) - On his 3,102nd pitch of a special season, Jacob deGrom was determined to reach one more milestone, rather than letting it linger until next year.

So facing his final batter, he reached back and threw a 92 mph slider past Ozzie Albies for his 1,000th career strikeout.

Now deGrom will wait a few more weeks to see if his remarkable run will win him the National League's top pitching prize.

DeGrom was dominant in what almost certainly was his last pitch for the Cy Young Award, throwing eight stellar innings and leaving with a major league-best 1.70 ERA as the New York Mets blanked the Atlanta Braves 3-0 on Wednesday.

"I'm really excited with how the night went," deGrom said. "I had the goal to get to that tonight. It was a lot cooler to get my 1,000th strikeout on my last pitch of the year than my first batter next year."

DeGrom (10-9) made his last regular-season start, striking out 10 and allowing just two singles against the NL East champions. He retired the final 20 hitters after allowing a single to Johan Camargo.

DeGrom gave up no more than three runs in his last 29 starts to extend his own single-season record. He also matched the overall mark set by Jake Arrieta in 2015-16.

"For me it's just watching a dominant starter and the best pitcher in baseball every five days," Mets manager Mickey Callaway said.

The Braves (89-69) had a six-game winning streak snapped. They began the day two games behind the Cubs for the best record in the NL.

DeGrom recorded his 11th double-digit strikeout game this season and 32nd of his career. Most of his strikeouts came on sliders in the low-90s mph and his velocity was in the high 90s on his fastball throughout the night.

The All-Star ace finished with 24 quality starts, the most in a single season, the Elias Sports Bureau said.

DeGrom received numerous ovations from the crowd of 23,205, even when he struck out in the seventh. By the eighth, the crowd was hanging on every pitch and, after he fanned Tyler Flowers for the third time, the fans began "MVP" chants.

"He was really good," Flowers said. "I just want to watch the game on TV later. I know I didn't get anything to hit. I know that. I think most of the other guys would say the same thing."

As the Mets batted in the eighth, the crowd began chanting "We Want Jake" and booed when Seth Lugo entered. Lugo finished off deGrom's latest gem by tossing a scoreless ninth for his third save.

DeGrom also won for the first time in six starts against Atlanta this year. He allowed four runs in 41 innings against the Braves.

"I don't know that I've ever seen him (pitch) bad," Atlanta manager Brian Snitker said. "That guy's so good."

Dominic Smith drove in the first run with an RBI single in the sixth off Luke Jackson.

Smith's hit was enough for deGrom, who allowed one or no runs in 18 of 32 starts this year, the most in the National League.

Michael Conforto hit his career-high 28th homer in the eighth with a long drive off Kyle Wright. Two batters later, Smith homered to make it 3-0.

Ronald Acuna Jr. opened the game with a single and stole second, but deGrom retired Ender Inciarte, Freddie Freeman and Nick Markakis. Camargo opened the second with a single, but deGrom fanned Flowers and induced a double play by Albies and did not allow a baserunner the rest of the way.

Ozzie Virgil Sr. was an honorary coach and exchanged lineup cards. Virgil, 86, was the first Dominican-born player in the major leagues when he made his debut for the New York Giants in 1956. During an eight-year career with the Giants in New York and San Francisco, Detroit, the Kansas City Athletics, Baltimore and Pittsburgh, Virgil appeared at catcher, third base and outfield. He currently serves as a special catching instructor for New York's teams in the Dominican Summer League and has spent the last 11 seasons doing so.

Braves: SS Dansby Swanson has a partially torn ligament in his left hand and it's unclear if he will be available in the postseason. He flew from New York to Atlanta Wednesday to get his wrist and hand examined by team doctors. He will undergo treatment while missing the rest of the regular season, which ends Sunday. Swanson will be revaluated next week before the best-of-five Division Series begins on Oct. 4.