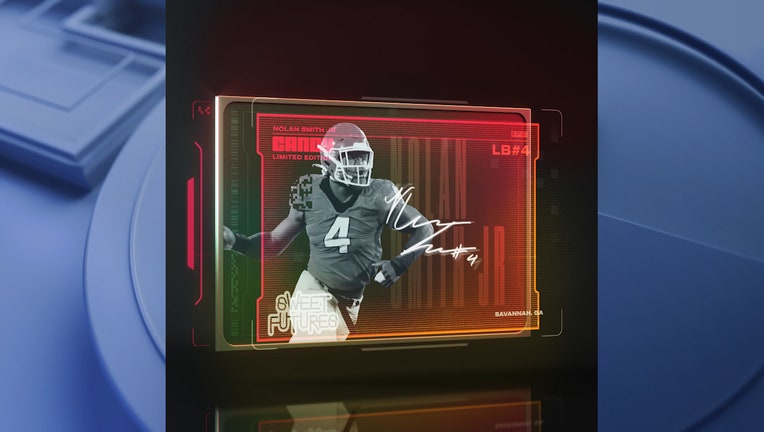 ATHENS - The undefeated Georgia Bulldogs are taking care of business on the field, and off of it. That includes standout linebacker Nolan Smith, who has a nose for the football, and for the next big thing in technology.

Smith partnered with Candy Digital on an NFT — a non-fungible token — through college athletes new ability to profit off their own name, image and likeness. NFTs are digital collectibles, allowing fans or collectors to prove ownership of a piece of digital memorabilia.

One of Smith's NFTs was auctioned by Candy for almost $3,000. The linebacker says he enjoys working with and learning about a new technology, though it took some explaining to his family members.

"It's kind of hard to explain, especially to my grandparents," said Smith. "The digital world is always something that's mind-blowing.

"I told my grandad, 'it's a trading card, just digital," said Smith. "That's the easiest way I could get it broken down to him."

Smith said other family members asked how they could get their own NFT, and he had to explain, that's not how it works. The scarcity of NFTs, even though you can't physically hold them in your hand, is what collectors feel gives them value.

Smith is one of Georgia's top players and leaders on the team's vaunted defense. While a long pro football career may begin in the near future, the junior linebacker has plans for his future off the field.

While plenty of Georgia athletes have taken advantage of the new NIL rules allowing players to profit off their name, image and likeness, he says the promotions are not often discussed among players.

"Honestly, as far as my team goes, we really don't even talk about [NIL deals]," said Smith. "We've got so much on our minds, we're talking about football nonstop."

There is one exception, though: quarterback JT Daniels, whose high-profile endorsements include the fast food chain Zaxby's, has gotten some attention from teammates.

"We do give [JT] hard times," said Smith. "Like, the videos of him eating the sandwiches and stuff like that? Now those are funny."