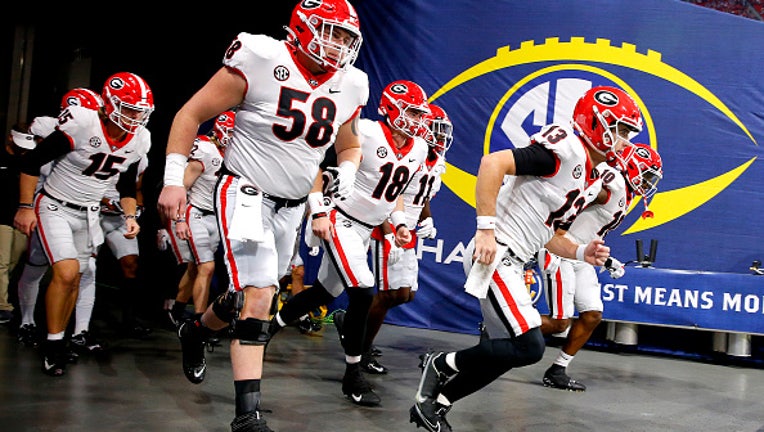 ATLANTA, GEORGIA - DECEMBER 04: The Georgia Bulldogs enter the stadium before the SEC Championship game against the Alabama Crimson Tide at Mercedes-Benz Stadium on December 04, 2021 in Atlanta, Georgia. (Photo by Todd Kirkland/Getty Images)

The College Football Playoff selections have been made and the Georgia Bulldogs are in.

Georgia lost to Alabama (who was No. 3 at the time) in the SEC championship game, who now has the top seed in the tournament. They'll face the fourth seeded Cincinnati Bearcats.

The Bulldogs will be seeded third in the tournament, falling from the top spot. They will face the second seeded Michigan Wolverines.

It was believed that the committee did not want to see a rematch of Alabama and Georgia in the semifinals, however CFP committee chair Gary Barta told ESPN that wasn't true.

Georgia Bulldogs are undefeated no more. The team lost to rivals the Alabama Crimson Tide 41-24 in the SEC Championship at Mercedes-Benz Stadium in Atlanta.

Barta said Alabama was the clear-cut No. 1 after the dominance over Georgia.

The Bulldogs and Wolverines will play in Miami at the Orange Bowl.

This is the third time two teams from the same conference are in the CFP and second time it has happened with the SEC. In the 2017 playoff, the Alabama beat Georgia in overtime to win the national title.

Semifinal winners will play one another on Jan. 10 at Lucas Oil Stadium for the College Football Playoff Championship.