ATLANTA - Bill Curry's Rolodex would read as a who's who of the football realm.

He was coached by some of the immortal figures of the sport: Vince Lombardi, Bobby Dodd and the late Don Shula.

Curry reflected on his relationship with Shula with FOX 5 Sports' Cody Chaffins this week. 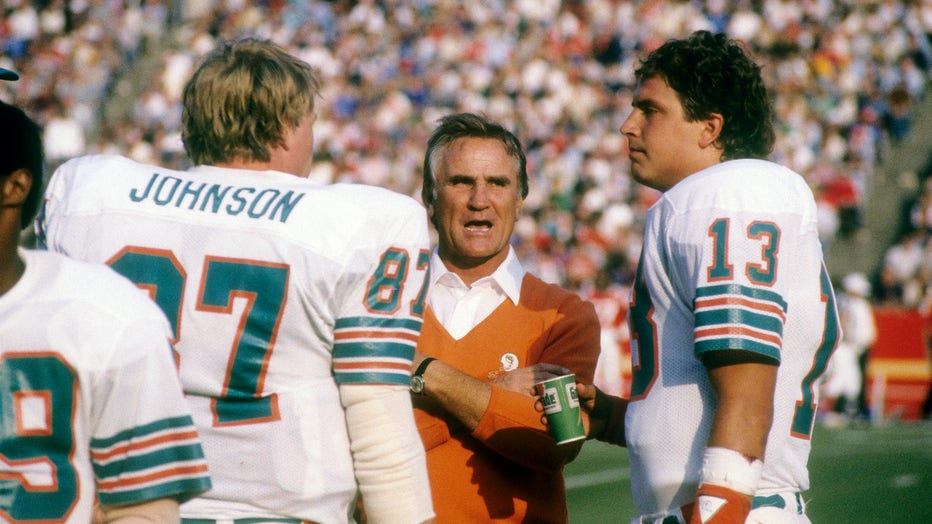 CIRCA 1980's: Head Coach Don Shula (C) of the Miami Dolphins in this portrait on the sidelines talking with tight end Dan Johnson #87 and quarterback Dan Marino #13 circa mid 1980's during an NFL football game. Shula coached the Dolphins from 1970-95

Shula coached Curry from 1967 to 1969 with the Baltimore Colts before Shula left for Miami. Curry had been acquired via a trade, and Shula let him try out a new position.

"In those days, everybody learned how to play offense and defense in college because of the substitution rules. Well I wanted to be a middle linebacker, so he gave me a whole year to play middle linebacker, and I bombed miserably," Curry recalled. "And I thought again, 'Well he'll just cut me and get rid of me.' But he didn't do that. He wrote me a letter. He said, 'I'm going to move you back to center so you can play some football.' Well I played some football for eight more years, and it was the best years of my career."

Bill Curry reflected on his relationship with the late Don Shula with FOX 5 Sports' Cody Chaffins this week.

The Georgia Tech Athletic Hall of Famer went on to play seven more years, until his final season with the Rams in 1974. In that span, Baltimore won an NFC Championship in 1968 and Super Bowl V in 1970, and Curry was named a Pro Bowl centeter in 1971 and 1972.

"I owe it all to him for giving me another chance," Curry said.

Curry said Shula remains one of his greatest mentors in the game.

"Well he tried to get me to call him Don, and he would laugh, but I couldn't do it. He was Coach Shula," Curry said. "I just had such great respect for him and even reverence because he gave me a chance when nobody else wanted me. And then gave me another chance when he ought to have booted me off the team."

"Those things are great ceelbrations of a life well-lived, and there's something wrong with not being able to do that," Shula said. "The rest of us, I think we worry about (catching coronavirus) a lot, and we would've loved to have a chance just to pay our respects."