ATLANTA - The forecast for this weekend at Sun Trust Park includes high temperatures in the 50s, and several hundred tons of snow. The Visa Big Air freestyle ski and snowboard event is taking over the Atlanta Braves' stadium on Friday and Saturday.

The relatively warm temperatures for a cold-weather sport were welcome among the athletes, who tested out the 15-story structure on Thursday and Friday.

"I personally kind of like the weather, you don't have to be fully bundled up," said Red Gerard, the 2018 Olympic gold medalist in slopestyle snowboarding. "It's nice being able to wear a t-shirt and hit a jump. It seems like the snow is holding up." 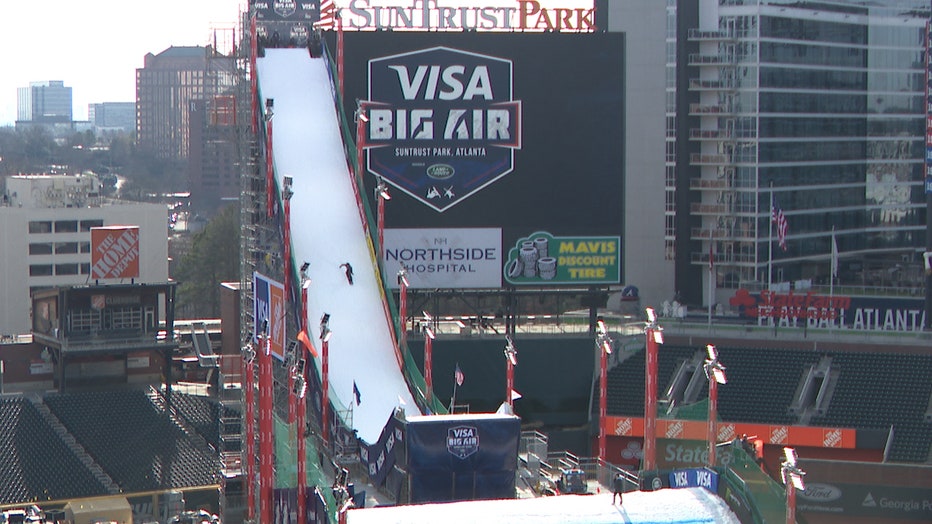 Some of the world's top freestyle skiers and snowboarders are in Atlanta for the event on Friday and Saturday.

Riders walk out to center field, take an elevator to the top, go down an approximately 40-degree slope, before launching off the jump and sliding to a stop, appropriately, around home plate.

U.S. Ski & Snowboard, the sport's govering body in the country, has been trying to take this kind of event to big cities around the country. Other baseball stadiums -- Boston's Fenway Park and San Francisco's Oracle Park -- have hosted similar events.

"Kind of brings the snow competition to the city, to the people, instead of people coming out to the mountains," said 2018 Olympian Julia Marino. "That means a lot more people can come. We don't get as many spectators as other events, so it's a good step for snowboarding."