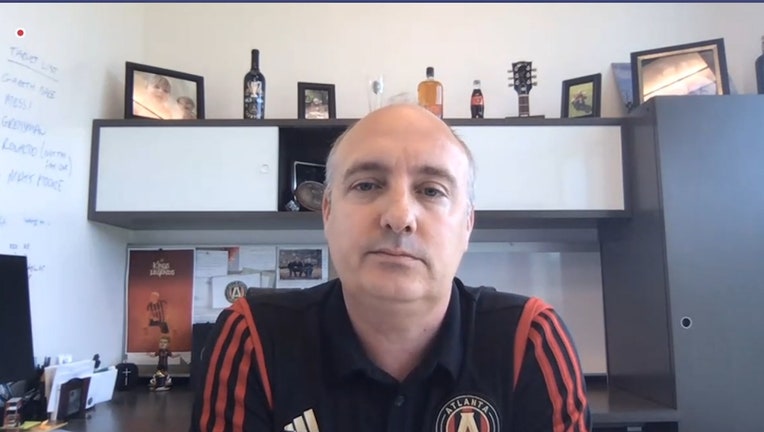 ATLANTA - The two Atlanta United players who tested positive for COVID-19 are doing well and both asymptomatic, according to team president Darren Eales. Meeting with the media on Monday, Eales did not go into many specifics -- including the names of the players who tested positive -- but said the situation shows precautions are working, because without regular testing, the two players might have never known they caught the virus.

"Ultimately you cannot limit the risk entirely," said Eales. "These are the things that are going to happen, and that's why it's important to have the consistent testing that we're having, so we can flag it up and limit exposure once you get a positive test."

Since the players tested positive, Atlanta United retested everyone, all results coming back negative. To be cautious, since the positive tests, the team has been social distancing while on the practice field. They plan to resume full team training after another round of negative tests.

Elsewhere in the sports world, teams are figuring out what to do if and when people get sick. College football teams including Clemson have reported positive tests since returning to campus for offseason workouts.

The University of Georgia athletic department is not reporting the results of coronavirus testing. The school says, as of Monday morning, 89 total students or employees have tested positive.

Georgia Tech has reported 53 total positive results among students or employees. They do not specify if any are student athletes.

In baseball, there are reports that MLB teams are thinking about moving their preseason training out of Florida and Arizona, where COVID-19 numbers are rising. The Atlanta Braves say they have no comment at this time.

The NFL is just over 5 weeks from when training camp should be starting. Falcons long snapper Josh Harris is the team's representative with the NFL Players Association, and says talks about COVID-19 safety are ongoing between the league's owners and its players' union.

"What we've been told from the beginning is that we're going to fit football into a COVID world, and not work COVID around a football world," said Harris. "At the same time, we're still not there with the testing. Until we get further along with the testing and the accuracy of those tests, all of these return to play discussions and things are kind of put on hold."

Meanwhile, Atlanta United is scheduled to play in the "MLS is Back Tournament" in July near Orlando. Eales says he is still comfortable with his team taking part in the event, despite increasing coronavirus cases in the state. He says it is key how his club handles the current challenge of having a pair of positive coronavirus tests.

"I think with a couple positive tests, it shows this is to be expected," said Eales. "We can't expect there not to be positives. The key is going to be how the protocol works now that we go forward."