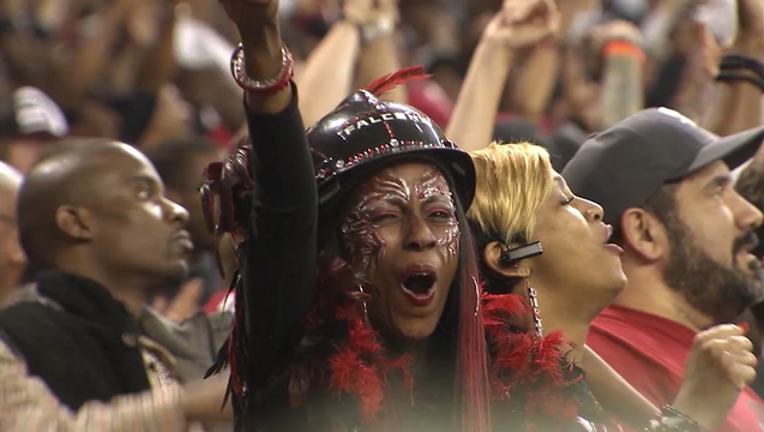 ATLANTA (AP) - The last time the Atlanta Falcons made it to the Super Bowl, they put on quite a show.

Just not when it mattered.

The team known as the "Dirty Birds" capped off a remarkable season in 1998 by doing almost everything wrong once they claimed a spot in the big game.

"I didn't do a good enough job of making them understand that you don't want to just be there," said Dan Reeves, who was the Falcons' coach. "You want to win it."

In the lead-up to the Super Bowl, Reeves actually got things rolling by unwittingly rekindling his ugly breakup with the Denver Broncos, who just happened to be Atlanta's opponent. Then there was a dispute over the way the players got off the plane once they landed in Miami. For some reason, receiver Terance Mathis decided the Super Bowl stage would be a good week to talk about his battle with alcohol and a feeling that he wasn't appreciated. And brash cornerback Ray Buchanan turned media day into a full-blown circus by wearing a dog collar - the Falcons were underdogs, you see - and saying Broncos star Shannon Sharpe looked like a horse.

All of that paled in comparison to what happened the night before the game, when safety Eugene Robinson - perhaps the most respected member of the team - was arrested for trying to pick up a prostitute. Robinson was bailed out of jail and played in the game, only to get beaten on a long touchdown pass.

Not surprisingly, the Broncos cruised to a 34-19 victory and their second straight title in John Elway's final game.

"Any kind of distraction hurts," Reeves recalled in an interview from his Atlanta home. "When one player causes a distraction the night before the game, it makes it more difficult. But we just got beat by a better team."

Despite the loss, the team is still remembered fondly in Atlanta, a city that has produced only one championship team - the 1995 World Series-winning Braves - in any of the major sports.

Jamal Anderson, who rushed for more than 1,800 yards and takes credit for the arm-flapping dance that gave the team its nickname, said he can hardly go anywhere without someone remembering the '98 Falcons.

"No matter what airport I'm in, when people recognize me, they yell, 'Dirty Bird!'" Anderson said.

Eighteen years later, with the Falcons headed back to the Super Bowl for only the second time in franchise history, the team that paved the way left behind some useful lessons.

For one, never assume there will be a return trip if things don't work out. The Dirty Birds certainly thought they'd get another shot, but they followed up their 14-2 season by going 5-11 the following year - the first of three straight losing campaigns. They didn't even get back to the playoffs until 2002, with a largely different cast.

By then, Anderson was out of the league, his career cut short at age 29 by two severe knee injuries.

"You never know what's going to happen," he said. "When you get a chance to be there, you've got to lay it all on the line."

Plus, the sting of losing the final game of the season never leaves you.

To this day, the 44-year-old Anderson has never watched a replay of his lone Super Bowl.

"You don't ever get over losing a Super Bowl," he said. "People's careers are made by being the MVP of that game. You get that title forever. I'm very proud of winning the NFC championship and the way we did it. At least we got to hang that banner. But I sure wanted to win the Super Bowl."

The NFC championship game remains the highlight of the season for Reeves, especially since it came just three weeks after he underwent quadruple-bypass heart surgery.

Despite their lofty record, the Falcons were huge underdogs going on the road to face the Minnesota Vikings, who had lost only one game while setting an NFL scoring record. In the raucous Metrodome, Atlanta trailed by 10 points early in the fourth quarter, and it looked as though the Vikings would clinch the victory when Gary Anderson lined up for a 38-yard field goal with just over 2 minute remaining.

Stunningly, Anderson missed for the first time all season.

The Falcons drove for the tying touchdown and won in overtime on Morten Andersen's 38-yard field goal.

On the stage in the middle of a stunned, emptying stadium, Reeves did the "Dirty Bird" with his players.

"There's not any question, the win in Minnesota" was the game Reeves remembers most. "Because of the circumstances and how good a football team they were and winning on the road, having everything really against you as far as the crowd and everything," he said. "Certainly, the fact I had bypass surgery made it little more special."

Unfortunately for Reeves and the Falcons, they couldn't win the game that really counted.

Little did they know, their loss would have a profound effect on a current Falcons star.

Vic Beasley was just 6 years old, but he was already a huge fan of the team growing up about an hour's drive north of Atlanta. Now an All-Pro defensive end who led the league in sacks, he hasn't forgotten the pain he felt watching the Falcons' first Super Bowl.

"I cried that night," Beasley said. "I still remained a fan through thick and thin."

Now, he and his teammates have a chance to finish the job.

They've got no bigger fans than the Dirty Birds.