Clemson easily held off Alabama on Sunday to retain the No. 1 spot in The Associated Press college football poll, extending its longest run atop the poll to seven weeks. 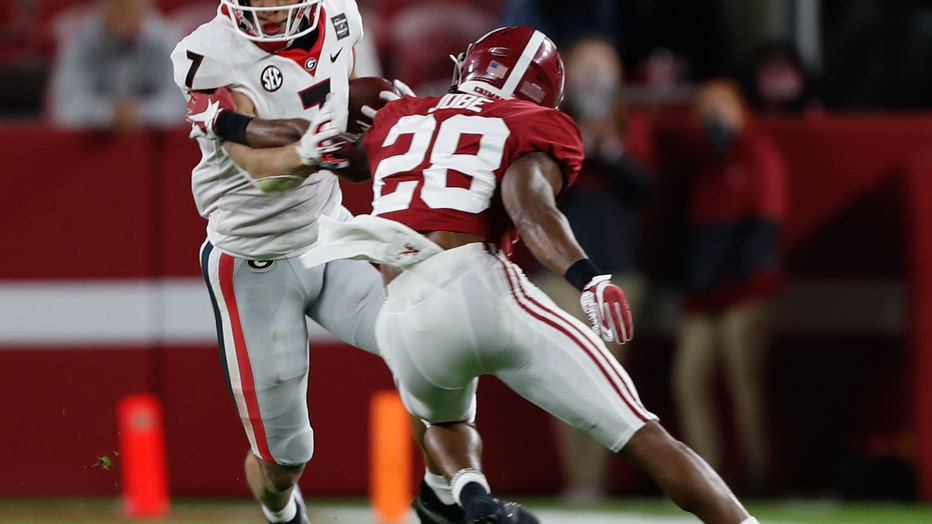 TUSCALOOSA, AL - OCTOBER 17: Jermaine Burton #7 of the Georgia Bulldogs runs the ball around a defender in the second half against the Alabama Crimson Tide at Bryant-Denny Stadium on October 17, 2020 in Tuscaloosa, Alabama. (Photo by Skylar Lien/Coll

The Crimson Tide ran away from Georgia on Saturday night to make the case to be No. 1, but it wasn’t enough to topple the Tigers.

Clemson defended its turf with a historic blowout against Georgia Tech. The 66-point rout was the largest ever in an Atlantic Coast Conference football game. Clemson received 54 first-place votes out of 62 from the panel of sports writers and broadcasters.

The Crimson Tide got the remaining eight first-place votes. Notre Dame moved up to a season-high No. 3, No. 4 Georgia dropped one spot and Ohio State moved up to No. 5 a week before the Big Ten starts playing.

Clemson has been No. 1 since the preseason. The Tigers have been top-ranked 23 times in school history but never more than five times in a season before this year.

North Carolina took a big fall, dropping nine spots to No. 14 after losing at Florida State.

Oklahoma State is No. 6, with Texas A&M, Penn State, Cincinnati and Florida rounding out the top 10.