COMMERCE, Ga. - A major decision in Washington, D.C., is expected next week that could impact the fortunes of Jackson County and the state of Georgia.

The US International Trade Commission is scheduled to decide whether a Korean battery manufacturer stole trade secrets from a rival company and used them to open a new plant in Commerce.

SK Battery America is scheduled to finish the first phase of the plant in 2021. When it’s up and running, the $2.6 billion facility along Interstate 85 promises to employ 2,600 people, earning an average annual pay of $40,000. The plant has already signed a deal to provide lithium-ion batteries for the Volkswagen electric SUV being built in Chattanooga, TN, and the new electric Ford F-150 pickup.

“I think this project has the potential to bring a whole new level of prosperity to the city of Commerce, Jackson County and the whole area of the state,” predicted Commerce Mayor Clark Hill. 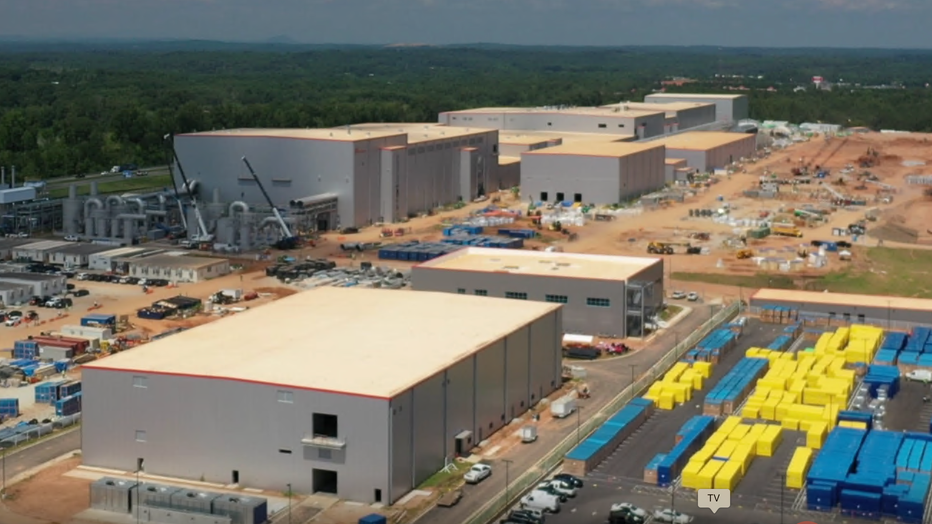 The $2.6 billion plant in Commerce is an imposing sight along I-85. Scheduled to open next year, the company has agreed to make batteries for the electric Ford F-150 and an electric VW SUV.

By all accounts, the Korean-owned company has done everything right to impress locals. SK Battery officials have appeared at community events and contributed $120,000 to fund a career academy for high school students who could one day work for the company.

New retail and feeder companies are already planned in and around this community of 7000 people.

But in April 2019, just weeks after a joyful groundbreaking attended by Governor Brian Kemp and other state and federal officials, a darker picture of SK Battery suddenly emerged.

Along with an unhappy rival. 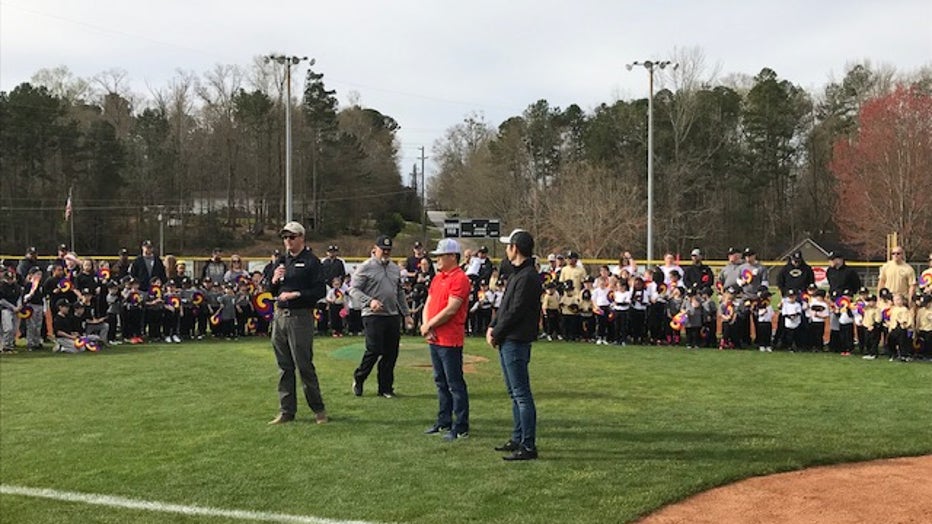 An official with SK Battery America throws out the first pitch in Commerce last year. The mayor says they're already seeing a positive economic impact on the community. (Courtesy city of Commerce)

LG Chem is another lithium-ion battery manufacturer also based in Korea. Coincidentally, the company's American headquarters are in Atlanta. They’re much larger than SK Battery and its parent company SKI. But in recent years, more than 100 LG Chem employees switched sides. And according to a complaint filed the US International Trade Commission, those former employees took with them some important battery secrets.

Even worse, according to the International Trade Commission’s initial determination, SKI tried to hide the evidence, yet did a sloppy job. Investigators recovered deleted emails giving SK employees some suspicious instructions.

“Please delete everything in the emails that discuss L-Company. You know why.”

“Delete every material related to the rival company…”

“Delete this email after completing this directive.”

“It was shocking to all of us,” said Song.

SKI denies doing anything wrong, a spokesman telling the FOX 5 I-Team LG Chem is “using this litigation to stifle competition.”

But the ITC judge wrote because the coverup was so blatant, he ruled against SKI without even giving them a chance to offer a defense. 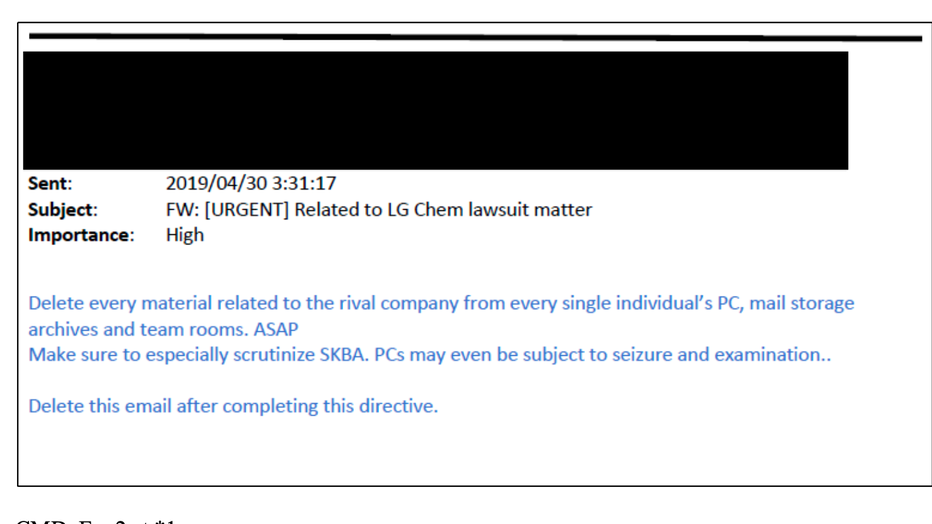 One of several deleted emails from SKI recovered by investigators from the US International Trade Commission.

The full ITC is expected to decide next week. If the order stands, LG Chem’s complaint could block SKI from importing any of the alleged stolen technology, a competitor putting the Jackson County plant in jeopardy.

Rather than the villain, LG Chem insisted they’re the first victim here.

“Can you imagine if some third party stole trade secret of Coca Cola, went to Jackson County, opened a plant and made a competitive product to Coca Cola?” asked LG Chem’s attorney Jung. “Would you be sympathetic to those people in Jackson County looking for those jobs? This isn’t any different. We’re the victims here. And unfortunately, Georgia is a victim and the people of Jackson County are victims.”

But the mayor of Commerce doesn’t feel like a victim. Hill and other Georgia leaders wrote letters to the ITC urging them to go easy on SKI. He said the revelations haven’t changed his opinion of the company.

“I think what will tell the story going forward is what quality of life that company provides to the citizens and the employees going forward,” said Hill. “And whether or not they remember any of it.” 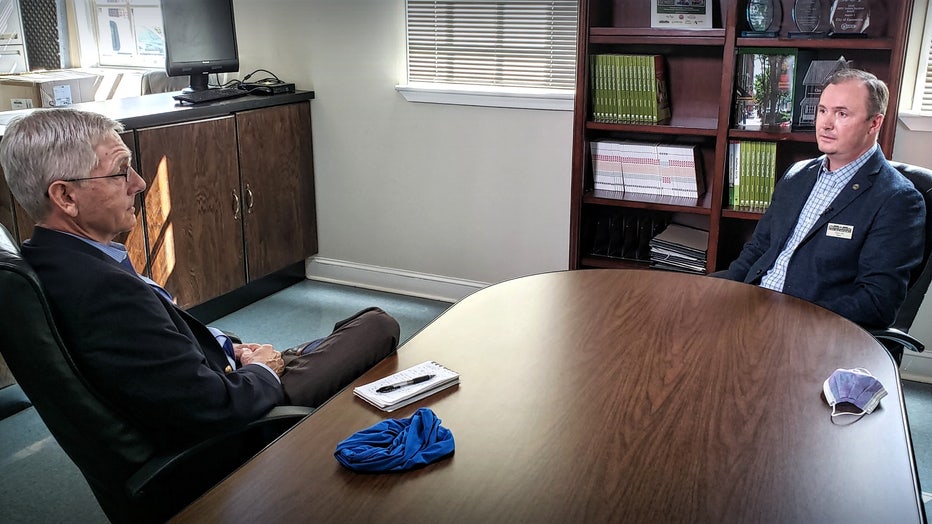 Commerce mayor Clark Hill said revelations SK Battery America stole trade secrets doesn't change his positive opinion of the company and the prosperity he expects it to bring to his community.

Joe Guy Collier, a spokesman for SK Battery, said his company “has maintained from the beginning that we are interested in resolving this matter so that resources could be better directed toward building up the U.S. auto industry. However, LG Chem remains focused on damaging a competitor at the expense of the U.S. economy, weakening the domestic supply chain for a growing area of manufacturing and hindering innovation that would benefit consumers.”

If SK Battery does lose next week, business experts in Korea predict the two companies will ultimately reach a financial settlement to license the technology in question. Song wouldn’t talk about that.

SK Battery has also had to fend off complaints from a local Congressman about the workforce building the plant. Others have raised concerns about safety, and where some construction workers are living in the area.

State and local governments promised $300 million dollars in tax incentives to SK, the second most ever granted, although most of that is contingent on the plant actually opening, and money flowing through the economy of towns with hopeful names like Commerce.