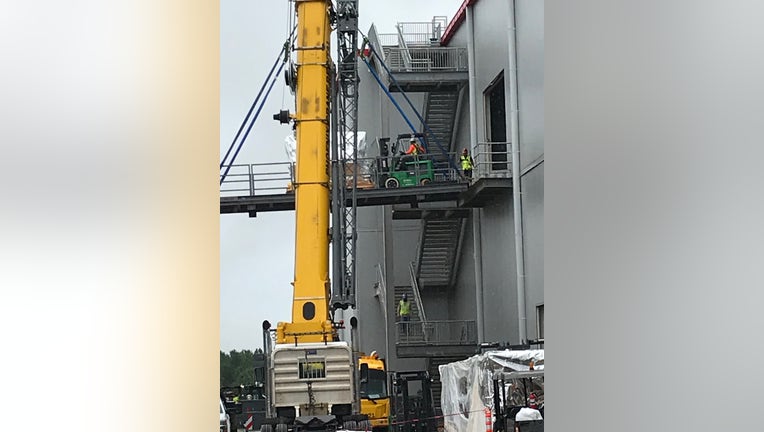 A forklift drives onto a platform suspended by a crane. It's one of many photos sent to OSHA about alleged safety violations. (photo by Randy Gregory)

Kimel Brantley worked as a safety officer for Eastern Corporation, one of the big contractors at the electric car battery plant. 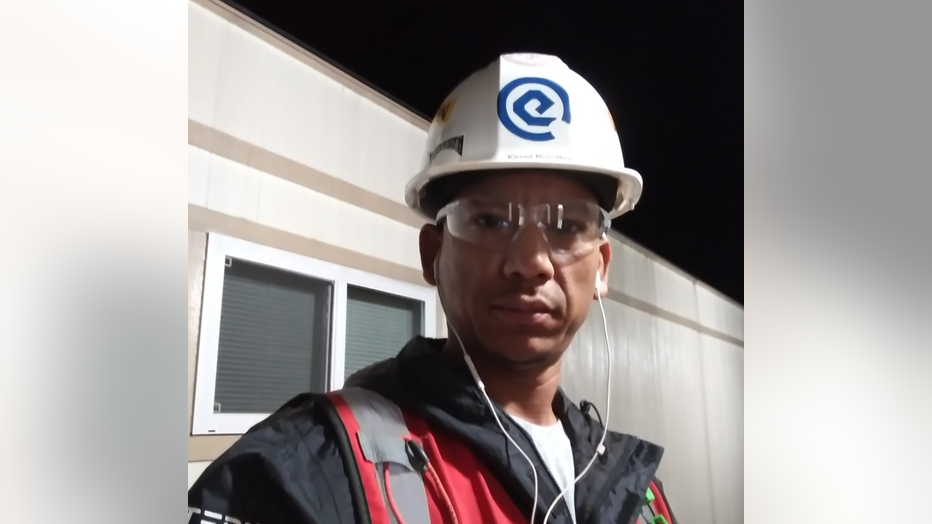 Kimel Brantley worked as a safety officer for two contractors at the SK Battery plant. His OSHA complaint accuses both companies of ignoring safety rules to get the plant finished by 2021. (photo by Kimel Brantley)

Brantley held the same safety officer job at MiDong, a subcontractor at the plant, before quitting earlier this month. He has since filed a complaint with the Department of Labor Occupational Safety and Health Administration or OSHA.

And he’s not the only worker worried.

“It’s a wonder someone hasn’t been killed already,” said Randy Gregory about other subcontractors. He’s one of the workers installing the elevators on the multi-billion dollar facility.

SK Battery is a Korean-owned company that landed $300 million in tax breaks and free land to locate the electric car battery plant in Jackson County. They promise more than 2,000 good jobs when it opens in 2022.

But when the FOX 5 I-Team watched the various contractors at the job site last month, most of the workers were from overseas, doing jobs that union leaders said unemployed American pipefitters or electricians could easily handle.

“All I hear is 2,000 jobs,” complained David Cagle from Local Union 72. “Does the construction industry not matter? The average common man that works with his hands?” 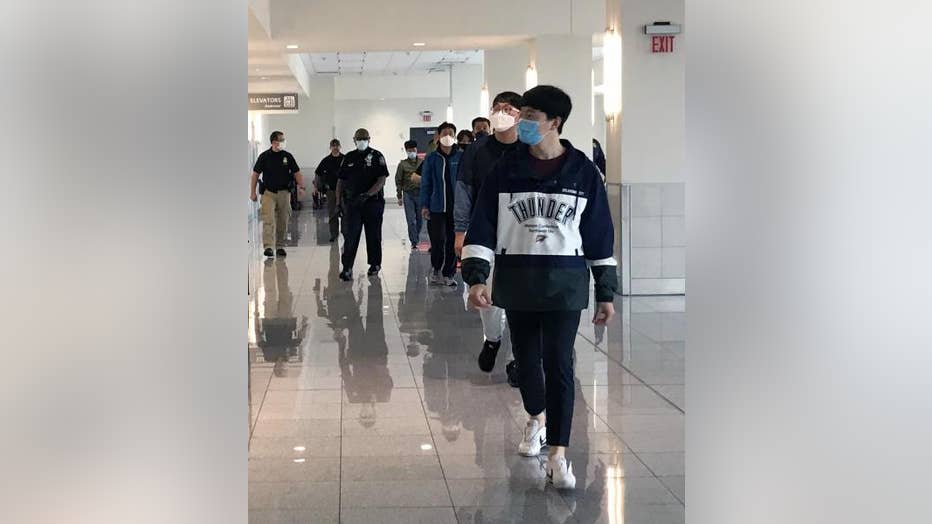 Customs says it caught 33 Koreans trying to sneak into the US with fake papers to work at the battery plant. American workers complain Korean workers don't understand American safety standards on a construction site. (Photo by Customs and Border Prot

In May, Customs said it caught 33 Koreans trying to get into the country with fake papers to work at the battery plant. SK Battery said it’s hired 1,000 Americans to build the plant so far and “told its contractors from the start to place a priority on hiring local American workers.”

But Kimel Brantley said he saw Koreans repeatedly hired instead.

Half Korean himself, Brantley said he tried to stress safety on the job site, but because he couldn’t speak Korean his advice went nowhere. He said he got no support from his bosses at either Eastern or MiDong.

This month, Brantley filed a complaint with OSHA, writing he had “witnessed many workers exposed to fall hazards and general safety hazards," but instead “the companies decided to risk this activity so that production would stay on track for 2022 completion.”

He also pointed out “the majority of the employees are Korean Nationals and Latino workers who have showed a lack of understanding of American safety standards.”

An Eastern spokesman told us they “can’t imagine Mr. Brantley’s comment being true because it is against Eastern’s strict safety policy regardless of project schedule. Safety matters are our first and foremost priority.”

We reached out to MiDong but got no response.

In June, OSHA fined another SK Battery subcontractor $6,072 for a scissors lift accident that sent a worker to the hospital.

Jackson County EMS said they’ve responded to four emergency calls at the site since April, transporting two workers but none with life-threatening injuries. 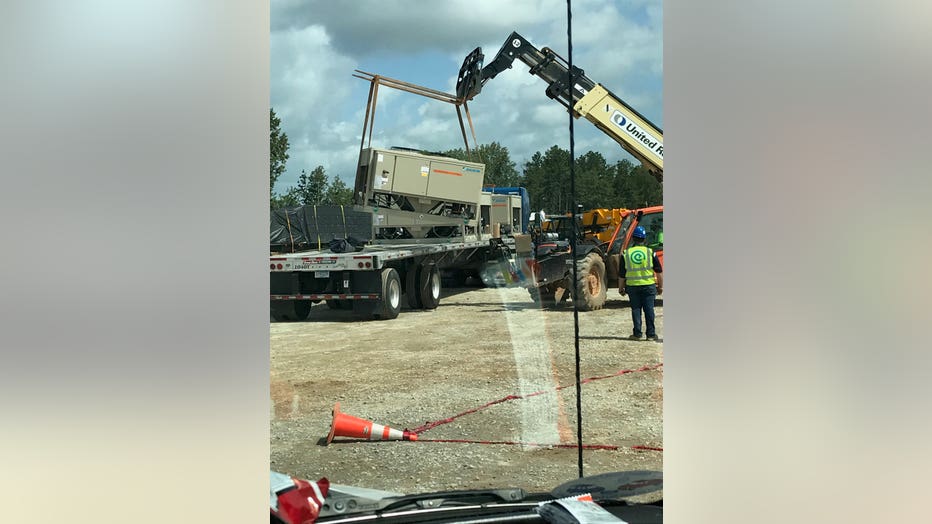 Workers use a forklift to remove equipment from a flatbed truck. Safety experts say you should never use a forklift as a crane because the load can shift or fall. (Photo by Randy Gregory)

“They turn a blind eye to safety in order to get something done,” said Gregory, the elevator subcontractor. We talked to him by video call from the job site during his lunch break.

He sent us a series of photos he took the week before, showing what he felt were serious safety violations by another contractor on the job site. In one, a worker had driven his forklift onto a platform that was suspended 30 feet in the air by a crane. The worker was lifting pallets of equipment from the platform.

“The slings break and that platform comes down with that guy in the forklift on it,” said Gregory.

Those photos are now part of a separate OSHA complaint filed by the union on behalf of Gregory and other workers. It doesn’t name a contractor. 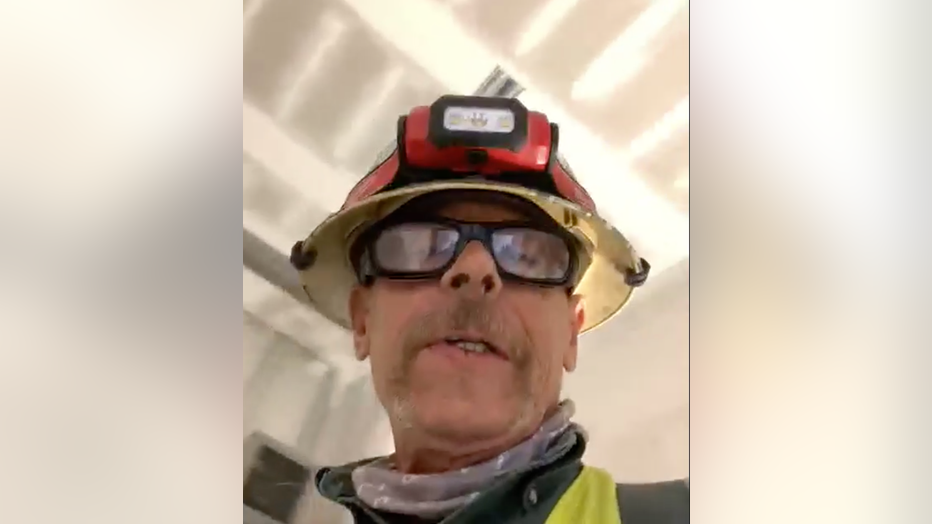 Randy Gregory said he took pictures of what he believes are serious safety violations by other contractors because he wanted to leave his wife proof in case anything happened to him.

“The consensus of the workers that care about leaving the job at the end of the day in the same condition as they were when they walked in that morning is that there is little regard for proper safety procedures and hazard prevention on the job,” read the complaint.

A 26-year veteran of the construction business, Gregory said when it comes to safety, the SK Battery job site is one of the worst he’s ever seen. He said he took those pictures in case his wife needed proof of dangerous work conditions that would lead to tragedy.

“That’s my biggest concern is making sure we don’t get caught up in the middle of something stupid that they’re doing,” explained Gregory.

In a written statement, SK Battery said “although on-site safety management is carried out under the responsibility of our general contractors, SK Battery America puts the safety of construction personnel at the site as the most important priority. We are working with our contractors to ensure all safety standards and appropriate procedures are being followed at the site.”

Eastern had no comment on the photos, insisting the company “regularly trains its employees and subcontractors to provide the work environment as safe as possible for all workers on site.”

But what happens when one of those safety officers tells the government that’s just not true?